Big Brain Academy: Brain vs. Brain is a solid collection of mental exercises, but the focus on competition loses the game some of its friendly, self-improvement vibe.

In the heyday of the DS and 3DS, Nintendo dedicated itself to a "blue ocean" strategy of attracting a wider audience than traditional gamers. Headlining this effort were games like Brain Age and Big Brain Academy, puzzle games targeted toward non-gamers that promised regular mental exercises to stay sharp and enhance your focus. More than a decade later, Big Brain Academy: Brain vs. Brain recenters itself around Nintendo's new strategic priority: social features and competition. And while the puzzles in Brain vs. Brain work just as well as ever, the competition aspect is an awkward fit that runs counter to a game series that has always been friendly and non-judgmental.

The main appeal of these brain-training games has always been to run your own race. Chipping away at daily exercises with Big Brain Academy's fictional Dr. Lobe lets you see the progression of slow, steady improvement as you sharpen your mental acuity. In previous games, over the course of a week or a month or even several months, the improvement would get more consistent and you could see yourself getting smarter, or at least better at these particular gamified skills. Brain vs. Brain is centered around competition, and feels a little less approachable for it.

That's not to say the game itself shames you. Dr. Lobe is as positive and encouraging as ever, always couching weak spots in gentle terms and nudging you to spend some more time practicing any fields where you didn't excel. But when you create a puzzle game ostensibly about measuring intelligence, and then pit a player against both friends and a worldwide gaming audience, it's going to be fertile ground for planting self-doubt.

Big Brain Academy: Brain vs. Brain measures your competency in five categories--Identify, Memorize, Analyze, Compute, and Visualize--each consisting of four exercises. The lines between those categories can be fuzzy. The Shadow Shift game, which has you pick out silhouetted shapes, is grouped in the Visualize category when it could easily fit into Identify, for example. Each exercise ramps up the difficulty as you complete phases of it on a timer, adding both more elements and complexities to those elements. By the time you reach the top few ranks, you may need to sit and think for several moments. Some exercises become downright inscrutable, at least in the final few seconds you have remaining on the clock.

Your single-player options are limited to Practice, an unlockable Super Practice mode that starts the exercises on a higher difficulty level, and the holistic Test function. The Test is meant to show your aptitude across all five categories by serving them up one at a time, resulting in a pentagon-shaped spider chart with sharper spikes in the fields where you excelled. The idea is to give an easy visualization of where you're doing best and where you could stand to improve, and it does that well. When I first started I was extremely lopsided toward Memorize and away from Compute, which squared with my own understanding of my strengths and weaknesses. After some practice I made the graph roughly more symmetrical, which is ultimately the goal--to brush up on weaker spots so you're well-balanced across the disciplines.

That said, it's not an exact science. The Test function plucks one of each category's exercises at random, and after practicing there were still some exercises that I just didn't connect with very well. Even within a category I felt comfortable with, there would inevitably be an exercise I struggled with. If one of these weaker exercises happened to be the one that came up during a Test, it would throw off my entire score, and the test would be a wash. Similarly, some games are especially brutal at burning your clock, which can impact your score. The higher levels of Fast Focus, a game that slowly reveals a picture to you, take so long to reveal anything even potentially recognizable that it can be maddening watching the time tick away.

You can brush up on these skills in Practice mode by taking on one event at a time. That helped, but sometimes I would find myself frustrated by the timer suddenly pulling the plug on an exercise. Some of the more advanced exercises take more time to think through, and by the time I reached one I wouldn't have enough time to invest in it before it abruptly ended. The Get In Shape puzzles, for instance, have you build increasingly complex shapes out of small parts, and I would have liked the opportunity to take some of the advanced puzzles at my own pace. In those moments it didn't feel like I was really building my skills. Rather, I was just racing to give myself time to even attempt to build more advanced skills. Super Practice helps by starting you at a higher difficulty level, which also makes it easier to rack up higher scores.

The main competitive mode in the Solo menu is Ghost Clash, which pits you against ghost versions of your friends, other profiles on the same Switch, or strangers across the world. Finishing the exercise first gets you more points, and the first to 100 points wins the clash. It's not quite a head-to-head competition, but it reproduces the basic effect well. Another method of competing with friends is checking your Ranking, which shows your Solo scores across both the Test and each individual exercise. A local Party mode lets you compete against other players, and includes some decent equalizing features such as a special "Sprout Mode" intended for younger players. Still, a lot of the games require some fundamental math skills, so very small kids would likely be lost. On the whole the in-person competitive modes seem aimed at leveling the playing field in a way that the online modes aren't.

One odd-duck element to this is the use of touch controls versus a traditional controller. Big Brain Academy has its roots on the Nintendo DS, which came with a dedicated stylus. Brain vs. Brain maintains this element and lets you use touch controls, and in my experience that actually seems to be a big competitive advantage over a controller. But the Switch never feels totally natural as a touchscreen device, both because of its oblong shape and the fact that it doesn't come with its own stylus. Plus, it's just strange to have a competitive game where handheld players have such a huge competitive advantage based on the touch-based control scheme.

Your reward across all of the single-player modes is coins, which unlock outfit options for each 10 coins you gather. Longer events like a full Test or competing across all the categories in Ghost Clash nets you more coins, but the progress is still slow-going and will take a regular playing regimen to actually unlock everything. Like the other brain-training games, this is obviously meant to be a daily habit. The outfit options aren't all that compelling in themselves, but I did get a little smile out of seeing my avatar dressed in a deerstalker cap and fancy vest.

It's never been totally clear to me if brain-training games like Brain Age and Big Brain Academy are actually exercising your brain or simply improving your skills at these particular exercises. The takeaway of these games may be that there isn't actually a clear distinction between getting smarter and getting experience. Most of the time I just had to remember to slow down and approach the exercises cautiously to improve my score, which feels like a lesson in patience and focus as much as the ability to compute or analyze on a dime.

Big Brain Academy, and the entire brain-training sub-genre of puzzle games, were never as medically precise as they purported to be. But they were always about the fulfillment of self-improvement, not bragging rights. Big Brain Academy: Brain vs. Brain, thanks to its new competition hooks, feels just a little bit coarser. It's still plenty of fun in small doses, and the exercises are well-made and for the most part ramp up nicely. Just don't take it too seriously, and whatever the leaderboards say, remember to run your own race. 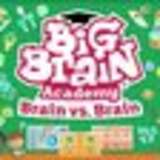 Steve Watts played roughly six hours of Big Brain Academy: Brain vs. Brain, going through several tests, practices, and friendly competitions. He was briefly ranked #8 in the world and will now retire. Review code was provided by the publisher. 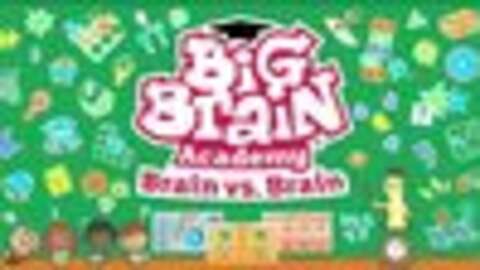