While it has low production values and little in the way of longevity, Big Beach Sports offers some fun when played with friends.

The success of Wii Sports has clearly had an influence on third-party publishers. Many have released or are set to release similar sports compilations of their own, with Big Beach Sports being the first attempt from THQ. It's a collection of six seaside offerings that includes volleyball, boules, American football, soccer, disc golf, and cricket. Some games work better than others and none of them offer much depth or reward, but as an occasional multiplayer diversion, Big Beach Sports houses at least some appeal.

For the most part, you interact with each game using the Wii Remote's motion-sensing abilities. In volleyball, for example, you flick the controller upwards to mimic a set, then slam it over your head to perform a spike. In cricket, you hold the Wii Remote like a bat and then mimic a swing to hit the ball. It's all fairly simple, and the computer will move your players around automatically to help you concentrate on the hitting and throwing actions.

Out of everything on offer in Big Beach Sports, disc golf is the most fun. As the name suggests, it's golf played with a frisbee, with different types of discs depending on the distance to the basket. The first few holes are fairly simple, but as you progress you have to start avoiding trees and water while also throwing much longer distances. The other games also work well--boules is a French take on classic bowls where you throw balls at a small target, while American football is a two-on-two beach version of the sport. Soccer is the only truly awful game in the package--it's less suited to motion-sensitive control, and the poor AI and lack of team members mean that it's very dull to play.

You can play these sports in short games or tournaments, but that's about it. While it's diverting enough when played in short bursts with friends, the lack of depth and poor reward system offer little in the way of longevity. It takes just a single game to get the hang of most sports, and in the case of boules and volleyball, you've pretty much mastered it by the second. There are tournaments to play through for each sport which gradually increase in difficulty, but aside from trophies and a few unlockable characters, there's little to spur you through the game.

Big Beach encourages you to create your own character from the main screen, choosing a name, clothing, and even a custom-designed face if you have a Nintendo DS. The customisation options are not extensive, so don't expect to be able to change the minutiae of your character's nostril size, but it's good to see such a novel feature included in the game.

Big Beach Sports is a budget release, and in terms of presentation it looks every bit the part. Characters and environments are simple and boast no stylish flourishes or details, while the music is generic and unmemorable. There are very few options to choose for each game, and the menu system is drab and uninviting. The game also fails to present any top scores or statistical information. If you have a user profile, you can track your points and awards in the options screen, but you can't compare that information against other players' from the same screen.

Like most sports games, Big Beach Sports is best played with friends. Up to four people can play each sport, and if it's a game that's played sequentially such as boules, you can share a single Wii Remote amongst everyone. While you'll have more fun playing with friends, the games are still simple and offer no depth to encourage long-term play. There's also little reward for winning, and the game definitely would've benefited from some additional characters and costumes to unlock as you progress.

With a decent selection of sports and a budget price tag, Big Beach Sports is worth checking out for the novelty of a round of Frisbee golf. The production values and overall presentation certainly fit this cut-rate title, and you'll soon get bored if you're playing alone. But as an occasional diversion that you can dig out with friends, Big Beach Sports has some fun games that will keep you occupied for short amounts of time. 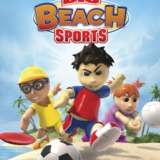