Certainly this is not an offensive game by any means, but it's remarkably average.

The snowboarding genre is definitely one that could stand to have fewer games coming out. It's almost as bad as the shooter was in the 16-bit era. Everyone and his mama is developing a snowboarding game with little to differentiate it from the last one. Take Big Air, for instance. Certainly this is not an offensive game by any means, but it's remarkably average, it offers nothing that hasn't been done before, and it reeks of the "me too" syndrome publishers suffer from when a "hot new genre" establishes itself.

Since it was developed by Pitbull Syndicate, the wily mastermind behind Test Drive 4 and 5, you'd think that another racing game would have been right up its collective alley. If you liked any of Pitbull's earlier games, you might prefer to pick this snowboarding game up, as opposed to, say, Cool Boarders 3 or Tricky Sliders. What you'd be picking up, however, is an example of a lackluster game merely going through the motions. As usual, the typical options are included: half pipe, boardercross, slalom, and free ride. A mode called big air has been included, which is essentially just like the half-pipe mode except that you attempt to do your stunts on a long straightaway with a big jump at the end. Wheee! 30 unique courses in six international locations are allocated to you, so you can try your boarding trickery without becoming hopelessly bored by the "same old, same old" gameplay. To pique your interest, the game is filled with licensed snowboards and snowboarding gear (K2, Quicksilver, Morrow, and so on) to give it that real-life feel. If you have a friend who is willing to play alongside you, the obligatory split screen is included so you can "thrash it out" with a pal.

Unfortunately, even if all this truly tickled your fancy, the presentation will test your patience. In what is surely a "love it or hate it" affair, the game engine does the game no favors. With a merely acceptable frame rate and a grainy seaminess to it, the course graphics are second-generation PlayStation quality, at best. It hardly makes any difference that real-life pro snowboarders are included, since almost no one except for hard-core snowboarding aficionados would know who any of them are, especially since they are viewed from the backs of their heads. Course design is also fairly uninspired, with courses often being little more than straight runs down a snowy hill, with the occasional jutting rock or tree to indicate undulations. The control interface is pedestrian as well and offers no new gameplay revelations. How many ways can you expect to do 1080s and liens anyhow?

The last aggravating touch is the inclusion of the gratingest, thrashingest soundtrack yet known to man. Is it the absolute rule that games of an "x-treme" nature must be littered with music by bands of an equally "x-treme" nature? If bands like Leatherface, Snuff, and Caustic Notions turn your knobs, then this game might be right up your alley. If not, head straight for the options screen and turn the soundtrack off. Without musical accompaniment, you're left with decidedly average snowboarding sounds that swoosh and pfffft with the best of them.

In case you haven't figured it out by now, Big Air is nothing more than a rental, and surely one that will go back the next day at that. If you must have a snowboarding game and you don't own an N64, Cool Boarders 2 is still your best bet. Unless you need a game with oodles of licensed stuff (boards, clothes, bands, and so on) Big Air is nothing but hot air. Next! 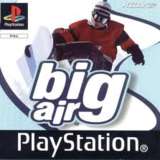