Beyond Atlantis is just a chain of nonsensical puzzles and conversations, albeit nonsense that attempts to be mystical.

"I could help you if I had my salmon," says a young woman in the first chapter of Beyond Atlantis. The game was developed by Cryo Interactive, a company with a reputation for making good-looking but shallow adventure games. Beyond Atlantis will do little to change this reputation, and you'll often find yourself trying to help someone recover her salmon with no real inkling of where you'll find said salmon or why that person would need a salmon to begin with.

For the record, the young woman needs the salmon to help you get past the eel guarding the glass tower. The king's hand is imprisoned in the glass tower, and you need to retrieve his hand so he can defeat the evil creature that has imprisoned him. That's not a cursory explanation of some deeper story - that is the story. Beyond Atlantis thrusts you into fantastic worlds where you wander around confused, solving puzzles in order to talk to people who simply lead you to more puzzles. There's no coherent story to tie everything together and, though they are loosely based on myths and legends, the strange people and creatures you meet are little more than devices that lob puzzles at you like softballs.

Cyan's Myst started this type of desolate puzzle solving, but at least that game gave you the feeling that you were solving its problems to some end. Beyond Atlantis is just a chain of nonsensical puzzles and conversations, albeit nonsense that attempts to be mystical.

At least it looks good. Your reward for solving puzzles is most often a new area to explore or a cinematic sequence. The worlds are well designed, if a little clichéd. Experienced adventure-game players will be familiar with Beyond Atlantis' locales like ancient China and the Maya civilization, as these have appeared in adventure games before. In Beyond Atlantis, you'll also visit Tibet, Ireland, and the mystical world of Shambhala. The cinematics are of the highest quality, and there are plenty of them. Unfortunately, the lack of a possibility for any real emotional connection to the game will make these movies nothing more than good-looking intermissions between puzzles.

The sound isn't as good as the graphics. The music, while good, consists of short orchestral loops that get monotonous after only a few repetitions. The voice acting is mediocre, though this isn't much of a problem because everyone speaks in short, cryptic sentences, and the dialogue does little more than point you in the direction of a new puzzle or the means of solving an earlier one. There's no character development and very little exposition.

What makes matters worse is that Beyond Atlantis has a few design problems. The game uses the standard node-to-node system of navigation, meaning you travel from one static point to the next. The game has a sort of "keep off the grass" design that gets frustrating at times, as you often have to take a roundabout route through the preordained paths to get somewhere. There is also a noticeable pause that occurs when you try to move forward. It's imperceptible at first, but it becomes aggravating once you've become familiar with an area and are trying to move long distances to solve a puzzle. Finally, there's no way to examine objects in your inventory (at least none that's described in the manual), so looking at objects that may contain clues to puzzles is impossible after your initial close-up viewing.

Those who love adventure-game puzzles for puzzles' sake will like Beyond Atlantis, as there are many puzzles in it and they come in all varieties. But what separates great adventure games like Grim Fandango, The Longest Journey, and Myst from more standard games like Beyond Atlantis is that the better games use the puzzles and locations to bolster likeable characters and an interesting story. Even the best adventure games will occasionally ask you to find a salmon - the difference is that you'll understand why, and you'll want to. 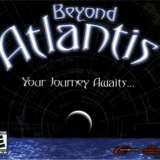