This explosive puzzle game is sometimes too chaotic for its own good, but it's difficult to put down once you get sucked in.

Bejeweled has been the king of the ubiquitous gem-smashing genre ever since its inception almost a decade ago, but the franchise can't just rest lazily on its laurels if it's going to keep that coveted crown. Enter Bejeweled Twist, a puzzle game that has little in common with its forebear aside from how it compels you to destroy gems at all costs and watch your score soar into the stratosphere. Increased maneuverability has injected a dose of speed into the mix, while explosive bombs threaten you with a premature ending to your fun. Bejeweled Twist shares the addictive nature of the legions of puzzle games that have come before it, but it doesn't stand out from the crowd. The gameplay is often too chaotic to reward careful planning, and the multiplayer feels like little more than a throwaway. But once you get into a block-busting groove, it's hard to pull yourself away.

The concept in Bejeweled Twist should come as no surprise to puzzle veterans. Your 8-by-8 playing field is covered with colored gems that need to be destroyed for some undefined reason. By situating three same-colored blocks in a line, you cause them to explode, forcing a few new gems to fall from the ceiling. Unlike in the original Bejeweled, you are not beholden to moving your gems only when you can make a match. Rather, you can rotate groups of four pieces at anytime, letting you meticulously place gems for maximum combo impact. The game can be played with a stylus or the standard D Pad plus one button method, and though both get the job done, precision is much easier if you forgo the stylus completely. Either way, you select a 2-by-2 area and tap the screen or a button to rotate it clockwise. Unfortunately, you cannot rotate blocks counterclockwise, which is a bit limiting when you're rushing to make a match.

Lining up three of the same color in a row is easy enough, but if you want to show off and really push the score counter, you're going to have to make bigger matches. Score isn't your only reward for showing such puzzle-solving prowess, either. Match four in a row, and you get a flame gem that shatters everything nearby. Five in a row creates a lightning strike gem that takes out one row and one column, and if you manage to match six in a row, you get a supernova gem, which pretty much annihilates the whole screen. Needless to say, that last one comes in handy but is exceedingly difficult to create. The explosive impact of these special gems is pretty powerful, rocking the screen and spraying bits and pieces of decimated gems all over the place. It's a neat effect and is a worthwhile visual reward to go with your increased score.

These special gems come in handy when the game unleashes a few devious blocks to thwart your progress. Locked gems slowly materialize on the screen. They start with a warning, a benign padlock appearing on a random block. But after you take a turn or two, they solidify into a master lock, stationing a gem in place. The only way to remove one of these is to swing a couple of blocks over to make a match, and it's imperative that you do so quickly because these immovable obstacles can really get in your way. Bombs are even more troubling. These fall from the sky after a match and must be disposed of within a set number of moves. If you fail to line it up with two same-colored blocks, it explodes, and a brief minigame pops up. In this impromptu game of roulette, you tap the screen to stop a spinning wheel. If you line up bombs instead of gems, you lose, and your game is over. Doom (a spiky bomb) is the last obstacle. This slowly counts down your end like the bomb but can be destroyed only by using one of the aforementioned special blocks. If it blows up, there is no minigame to save you. Game over.

There are four single-player games to test your gem-busting might in. Classic contains the special blocks and deadly obstacles that offer the most notable departure from traditional Bejeweled. Difficulty ramps up as you complete levels, and by the time you get 10 or so levels in, you'll have to constantly be alert for bombs and locked gems, which creates tension as you desperately try to make matches. Zen mode removes these special items, letting you focus on matching colored gems at your own pace. Blitz packs the excitement into one 5-minute run, throwing out anything it can to halt your progress. And finally, Challenge mode gives you specific problems to solve. This is for the Bejeweled elite because the objectives on offer are extremely difficult for novice puzzlers to overcome. But if you are a puzzle master, you can lose hours trying to destroy five or more flame gems in one move or last 30 turns with deadly obstacles all around you.

Because of all the explosions constantly dismantling your playing field in Classic mode, Bejeweled Twist borders on chaotic. The screen rattles, shakes, and realigns with such frequency that building up big combos often comes down to chance, rather than careful gem manipulation. This frantic pace is compounded by the bombs that put pressure on you to move quickly and deliberately. Trying to dispose of these ticking tools of death is often frustrating because the screen is overflowing with so many destructible objects that making a specific match is pretty difficult. This chaos becomes apparent only when you get deeper into the game and adds a heart-racing element to the normally relaxed puzzle experience.

Finally, there is a two-player mode to round out this package. This is a competitive version of Classic mode, pitting two players against each other in a race to rack up combos before being overwhelmed by bombs. It's fun, because destroying gems is fun, but there is a severe disconnect between players. It's difficult to know what your opponent is up to, so it feels more like a single-player game peppered with random shouts of happiness or barks of anger rather than an engaging competitive experience. Furthermore, it requires two carts to play, which is pretty extravagant, and is bogged down by a lot of lag. The single-player component is the heart of the game, but Bejeweled Twist isn't at the same level as its prestigious progenitor. The game is hard to put down once you get in a rhythm, but the experience doesn't leave a lasting impression. 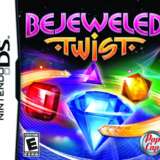