Bejeweled 2 Deluxe brings the classic puzzle game to the Xbox 360 but doesn't make enough significant changes to make it stand out from the pack.

Bejeweled, originally a flash game on the PC, is one of the most addictive and simple puzzle experiences you can find, and it's now available on your Xbox 360 in Bejeweled 2 Deluxe for Xbox Live Arcade. Offering four different modes, instead of the standard two, Bejeweled 2 makes a few changes to the original gameplay, but for the most part, it's identical to the first game. Though it's a faithful adaptation of a classic and popular game, there's nothing outstanding about Bejeweled 2 Deluxe, which makes it just barely a good game. Since you can get virtually the same experience for free on the PC, the motivation to play on the Xbox 360 is to chart your scores and to gather achievement points, and since the latter is extremely difficult, you're better off playing other, more novel Xbox Live Arcade (not to mention full retail) games on your 360.

In Bejeweled, you're presented with a grid made up of gems of different colors. You can take any gem on the board and swap it with the adjacent one. If by doing so you create three gems of one color in a row, then the swap will stick, and the three gems will disappear. The board will shift down to fill the gaps, and new gems will drop in from the top. The two original modes to chart your progress are classic, which allows you to play untimed until there are no more moves left, and action, which requires you to make gems disappear quickly, to prevent the timer at the bottom of the screen from expiring. Although both modes have slightly different motivations, the gameplay is identical.

The two new modes in the game are puzzle and endless. Puzzle mode is a series of preset gem patterns, which you must figure out how to clear in order to move through the mode. There are quite a number of puzzles, and as you progress, new items will be thrown into the mix to complicate gameplay. Endless mode cannot be beaten or failed, and it lets you play hours upon hours of Bejeweled to your heart's content. Although puzzle mode is interesting, it doesn't expand enough upon the standard Bejeweled gameplay to necessarily set this game apart from the previous one. In all modes, you'll be able to make power gems and hyper cubes, two types of gems that have special properties. When you align four gems of the same color, three of the four will disappear, and the fourth will turn into an explosive, or power gem. When the power gem is used in a three-gem combo, it will explode and destroy all gems, regardless of color, in the surrounding area. If you're able to align five gems in a row, you'll create a hyper cube. A hyper cube, when swapped with any gem adjacent to it, will cause all gems of that color on the board to disappear.

Although Xbox Live Arcade games are fairly inexpensive, at the current asking rate of $10, Bejeweled 2 Deluxe is on the higher end of the scale. This is cheaper than downloading the Deluxe version of Bejeweled for the PC, but not necessarily more valuable than the already free Hexic HD on Xbox Live Arcade. One of the most valuable aspects of downloading these games is the opportunity to get achievement points. Most of the achievement points in Bejeweled 2 Deluxe are particularly demanding and require a combination of luck and devotion to the game more significant than playing it casually from time to time.

Bejeweled 2 Deluxe looks almost identical to the original game, although it looks much sharper at higher resolutions. You won't really notice the difference unless you switch back and forth, though, since playing a puzzle game of this type can be easily done with any video quality. The sound effects consist of the clinking of gems as they shuffle around the board and various other sound effects to represent explosions, warping between levels, and the like. Though the presentation facilitates the game, it certainly isn't outstanding in any way. In fact, nothing about the game is extraordinary, which makes it good at what it does, offering a solid puzzle game experience but not necessarily a better one than what is otherwise available on Xbox Live Arcade. 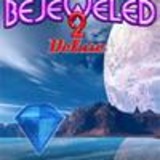