Become what you behold.

Games set within countries plagued by totalitarian regimes generally cast you as either the chosen hero who must rise up against their oppressors, or as a cog-in-the-machine type whose primary concern is survival. Beholder is the latter sort of game, casting you as Carl, the landlord of a small apartment complex in a war-torn region. Carl must alternate between spying on and assisting his tenants to earn cash and avoid reprisal, all while observing an increasingly ridiculous list of state-imposed laws and completing quests handed out by various characters of competing interests.

You’re presented with a cross-section of the building, which consists of six apartments and the basement where Carl lives with his family. You click your way around the tenement, talk to the people who live there, sneak into their apartments while they’re out to search for contraband and install hidden cameras, and maintain the building’s upkeep. The game is set entirely within this single complex; other characters can come and go, but Carl is drugged up on pills that prevent him from sleeping and forced to focus all of his attentions on the six apartments under his control. The game makes you feel simultaneously powerful and weak: as landlord you can save or ruin lives with your interventions, but you’re still ultimately beholden to the laws and regulations of the state.

Beholder has a dark sense of humour, but its attempts at levity never really land. It strikes an odd tone, and it’s hard to know how you’re meant to respond to the game’s bleakness. The nature of this game’s totalitarian state is well established, and you learn a lot about how its people are treated and how arbitrary its oppression is, but there’s little sense of what you’re meant to take away from it. Self-preservation is an important part of the game, but Carl and his wife come across as fairly unpleasant people (in my second playthrough Carl’s wife left him because he didn’t buy her a radio), and while there’s an imperative to protect your children their missions mostly boil down to accruing and then spending large sums of money.

Missions and objectives (often with time limits) pop up as you play, and you need to please the powers-that-be as they monitor your performance while also keeping your family happy and healthy. Completing the tasks handed out by the omnipotent ‘Ministry’, while also fulfilling requests from both your building’s residents and the political dissidents who will occasionally contact you, means making choices about your priorities, right down to which missions you follow and ignore.

Beholder is at its best when there’s enough going on to overwhelm you, when time is ticking down on an important mission as you desperately look for ways to make money to buy a mission-critical item or you need to choose between two different objectives that aren’t compatible with each other. Unfortunately, these moments can often be separated by long lulls, or frustrating moments where you need to speak to a resident who has gone off-site for the day. You can dictate the pace somewhat by choosing when to start certain missions, but striking a balance between being too busy and being bored can be difficult.

There are multiple ways to attend to each mission, but going for the ‘morally right’ option won’t always result in a ‘happy’ ending, which is an interesting, albeit flawed, approach. For example, one early mission focuses on evicting a man in your building, potentially separating him from his family. You can catch him committing a minor, harmless crime easily enough by spying through the peephole in his door, or you can take illegal goods, either by buying them from a merchant or stealing them from another resident’s room, and plant them in his apartment while he’s out. After this you write the crime up at your desk, file your report, and watch as police come to drag him away, leaving behind a distraught wife.

On my first play-through I followed a lengthy alternate method, talking to other people in the building about the situation, and trading a series of goods until eventually I was able to procure the man and his family passage out of the state by boat. This seemed like a happy ending until the family left; news soon arrived that the boat had been sunk, killing them. On my second play through the game I had him arrested, having learned my lesson. The game is too bleak and the characters too simplistic to conjure up any feelings of guilt when you seal their fate and move on, especially when so few of your actions have positive outcomes for anyone.

This focus on choice and consequence, as well as the huge difficulty spike between the default and ‘trainee’ settings (you’re given far more money and incur smaller expenses on trainee), means that Beholder feels like a game that you’re meant to play through more than once. The game is too repetitive to really support this, though; the close quarters of the apartment complex begin to feel claustrophobic over time, since the location doesn’t really change or evolve in any meaningful way over the course of the game. The on-going plotlines and characters aren’t interesting enough to sustain motivation over multiple play-throughs either. The people you meet are thinly sketched out, very few of them emerging as real ‘characters’ beyond their impulses and stated allegiances to the government. Spying on them never really leads to any interesting twists or revelations; in fact, there are very few surprises in Beholder, despite its focus on subterfuge.

The game is at its best when desperation sets in. You might find yourself robbing your tenants of their valuables and writing blackmail letters when you need cash, and several missions encourage you to kill residents. The payoff to all your choices and actions, of course, is seeing which ending you get. Unfortunately, my game steadfastly refused to load my ending, so I’m not entirely sure how things panned out for Carl. This was the only major technical issue I experienced with the game, but it was an extremely frustrating one.

Beholder is based on a strong concept, and it has moments that land well, but it’s also held back by repetition and an unexciting script. The unpleasantness doesn’t always feel worth the hassle, and few players will realise the ultimate goal of saving their family and escaping the mundanity of their tenement basement life without kowtowing to the state. If you can cut through the extended moments of tedium you can get a lot of mileage out of Beholder - and reaching the best ending on normal difficulty will provide an immense challenge - but the game’s dystopia isn’t a particularly interesting one.

View Comments (34)
Back To Top
5
Mediocre
About GameSpot Reviews 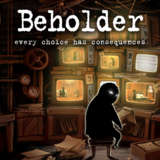 James O’Connor appreciates the ‘perform a mundane job within a horrible regime’ genre, although nothing has topped Papers, Please yet. He spent seven hours with Beholder, restarting the game once after the first two hours. Review code was supplied by the publisher.