Before Your Eyes Review - Don’t Wanna Miss A Thing

Before Your Eyes is a smart and moving first-person looker where your eyes are in control.

Plenty of games ask you to tweak the brightness or take a moment to scale the resolution to fit your screen before you begin playing. But Before Your Eyes is the only game I’ve played that asks that, before you start, you take a moment to do pretty much the same thing for your eyes. It’s strange, sure, but it helps set the tone for the wonderfully weird and moving adventure that you will help unfold across its impactful 90-minute runtime using nothing but a mouse, your webcam and voluntary and involuntary blinks.

That initial calibration is crucial for gameplay reasons, too. In this first-person narrative game, time moves forward each time your webcam sees you blink, so it’s imperative that the game can accurately detect when you’re actually blinking. To that end, Before Your Eyes presents you with a series of empty circles that fill in white as you blink. If it misses some, you can up the sensitivity and if it records blinks when your eyes are actually open, you can tell it to ease up. Like mouse sensitivity, but your peepers are the mouse.

It’s a memorable introduction to a game, and reminded me of the heady days of Nintendo’s mid-aughts experimentation; a time when you might be asked to blow into a microphone, or twist your Game Boy Advance like a steering wheel, or swing your Wiimote like a golf club. From this distinct starting point, high concept mechanics meet an equally high concept narrative.

You wake up on a boat where a talking wolf in a yellow raincoat and boots has just fished you out of a river of souls. He’s taking you to the Gatekeeper, a mysterious entity that guards the entrance to the afterlife. If the Gatekeeper is impressed with your life story (as told by the wolf), you’ll move onto whatever comes after death in this strange cosmology; a “magnificent city,” if the wolf has it right. But, in order to learn your story, you and the wolf must watch your life from beginning to end. As the wolf explains, you’ll get a few brief moments to watch before a ticking metronome appears at the bottom of the screen. After that, if you blink, time will move forward. “Could be a second,” the wolf says, “could be five years."

Then, you’re back at the beginning of your life, as Benny, a baby on the sand, blinking up at the sky, blinking over at your mother in a beach chair. You keep blinking and the years pass quickly. You get to know Benny’s father, Richard, a good natured, slightly schlubby professor. You get to know Benny’s mother, Elle, an aspiring composer who, at some point along the way, took a job as an accountant; a job which, over time, became a career. This dream deferred becomes one she dreams for Benny. As soon as her child is old enough to sit, she’s sitting him in front of a miniature piano, explaining the aural difference between a C sharp and a C minor. Eventually, Benny is performing on the regular-sized piano, playing “Für Elise” and, then, more difficult tunes, and eventually vying for entrance to an elite music school. During these piano segments, you simply need to move the mouse back-and-forth as different segments of the piano light up. It’s light in its interactivity, but Before Your Eyes casts you as half viewer and half participant. You have the power to make certain decisions, but the course of Benny’s life was set when the wolf fished you out of the river.

As the game unfolds, you realize that your blink has, effectively, replaced the interact button. You blink to make time move forward. You blink to dispel the dark fog that hovers over the periphery in some memories. Later, when Benny goes to school, you blink at your journal to jot down notes. It’s an all-purpose interaction and if you prefer, you can tweak the controls and just play the game by pressing the left mouse button, instead. But there’s something wonderfully unique in playing with your eyes.

This is the only game I’ve played where my advancement through the plot was often involuntary. Sometimes you want to stay in a scene, to hear all the dialogue there is, but your eyes are just too dry to withhold a blink. For example, I didn’t hear Benny’s professor father tell a group at a party that he taught “Maritime Architecture” until my second playthrough. More importantly, I didn’t hear Benny’s mother dismiss his field (which does, indeed, sound made up) by telling the group that no one knows what it even means. There is a good chance that you will miss this sort of textural line, the kind of line that helps round out a character’s personality, because you accidentally blink.

This is the brilliant ludonarrative harmony of Before Your Eyes. It’s a cliche, to say that life passes us by in the blink of an eye, or that we only realize we were in the good times after we’ve left them. But Before Your Eyes manages to gamify that familiar feeling. Benny is remembering his life, and he may well want to linger on the good times. But keeping your eyes open becomes physically difficult after a while. You as the player and Benny as the character are forced to move on.

I appreciate the inclusion of the option to play with a mouse as it will make the game more accessible for more people. But, I used that option for most of my second playthrough, and it fundamentally changes the pace of the game. Whereas, when you play with your eyes, you become immersed in the feeling that you can’t stay in these moments, playing with a mouse allows you to hang around for as long as you’d like, here all the dialogue, metabolize the past in its entirety. In addition to the gameplay differences, my time using the left mouse button was the only time I encountered bugs in the game. During one annoying moment, I had to switch back and forth from using the mouse to using my eyes to get the game going again from a black screen.

The occasional bug is a small price to pay for a game this inventive, though. Before Your Eyes explores the full range of possibilities that its unique mechanic opens up. In some later moments, you need to keep your eyes open for much longer than normal as the camera slowly zooms in on something. You and the character must focus intently. Other times, you have to close your eyes to listen in on a conversation in another room. You and the character must listen intently. A game has never made me feel like I was in church before, but those moments, with my eyes squeezed shut, allowing the words to wash over me, felt like prayer.

Eventually, this simple story of one person’s life becomes quite moving. I don’t want to spoil the second half of the game, but Before Your Eyes takes a turn for the inward. It becomes less about the events of Benny’s life and more about the people who loved him. In the game’s final scene, Sarah Burns as Elle and Stephen Friedrich as the wolf, turn in powerful vocal performances that help the game reach new emotional depths, summing up the impact that a life — even a short and seemingly unimportant one — can have. In its climax, the game argues that the people we love matter more than the things we accomplish. It’s a simple thesis, but Before Your Eyes honors it with a beautiful defense.

Before Your Eyes understands that experiencing our lives, of storing memories which become precious, is often tied to what we see: the people and the paths stretching out before us. Instead of feeling like a gimmick, Before Your Eyes feels refreshingly natural. Unusual control schemes often make me long for the familiarity of a controller. Sure, I can speak to my Nintendogs using the microphone on the DS, but sometimes I don’t want to yell at my shih tzu on a Delta flight. Before Your Eyes manages to do the opposite. Its unique mechanic matches its narrative so perfectly, that you won’t want to play it any other way. 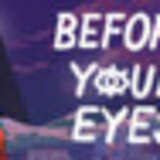 Andrew played six hours of Before Your Eyes for this review, completing the game twice. He doesn’t know exactly what life after death will look like, but he hopes it includes a wolf in a raincoat. His review was conducted on a retail copy of the game.