If you've seen Saving Private Ryan, you might agree that the first scene in the World War II film stands out from the rest. The scene lasts around 25 minutes, and it's an incredibly visceral, visually graphic re-creation of the D-Day invasion of Normandy. The action takes place from the perspective of the American troops who storm Omaha Beach in armored landing crafts, only to meet with a deadly barrage of mines and enemy fire. WizardWorks, the same publisher that brought you Deer Hunter, tries to capture the intensity of a WWII beach attack in BeachHead 2000, a loose remake of an old Commodore 64 shooter. For a short time, it may prove to be a fairly entertaining diversion. However, BeachHead 2000's limited gameplay won't hold your attention for long.

In BeachHead 2000, you're a lone turret gunner defending a stretch of beach that's under siege. You view the beach from a first-person perspective and aim using the mouse. Your turret is equipped with a machine gun, a howitzer cannon, and guided surface-to-air missiles. You also have a handgun to use as a last-ditch defense. At the beginning of each level, you're given a limited amount of ammo for each gun. Much of the strategy of the game comes from deciding when and where to employ this precious supply of ammo. Fortunately, supply aircraft make frequent parachuted drops of ammo and health. But to obtain these, you've got to shoot the drop-package itself. Attempting to nail these drop-offs with anything but a machine gun poses a considerable - and at times frustrating - challenge. Even if you get the extra ammo, you may still come up a few missiles or rounds short, which can make completing the level nearly impossible.

BeachHead 2000's graphics are OK sometimes, but pretty rough in certain respects. The enemy choppers, APCs, landing craft, tanks, and bombers are rendered in 3D with real-time lighting effects - and they actually look decent. The problem is that many of the units pop up out of nowhere, almost as if the game were rendering them late. The infantry troops don't look nearly as good: The foot soldiers look acceptable, but only from far away as they file out of the armored landing crafts. As they draw closer, their choppy animation and 2D photo-scanned faces look silly.

BeachHead 2000's gameplay is fast-paced and straightforward. It plays similarly to old arcade shooters like Operation Wolf and Terminator 2, only the screen doesn't ever scroll in any direction. The levels steadily increase in difficulty until it seems as if they won't get any harder. After that, you just continue on and rack up as many points as you can by gunning down the enemy. You can't actually win. The game grows old quickly, as taking out the stream of enemies in each level becomes repetitive. Even the enemy units themselves soon become predictable, as the ground and air units seem to repeat the same maneuvers over and over again. Also, although your inability to move makes sense in the context of the game, it makes the game much less engaging.

BeachHead 2000 isn't horrible, though it's not ambitious at all. It has moments that can be satisfying, and the gameplay is quick and easy to learn. If you're a casual game player looking to let off a little steam in a WWII environment, you might enjoy BeachHead 2000 for a little while. But the game isn't suitable for anyone else. 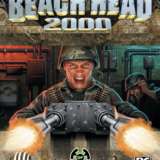 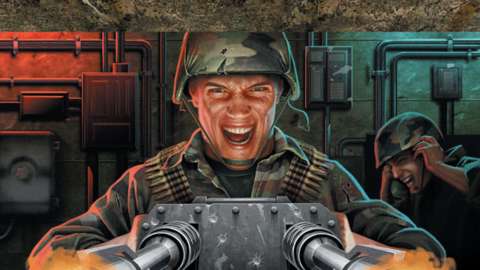