The designers have neutralized the fast pacing and complex mechanics that made the first game so much fun.

Activision's Battlezone has become better known for its poor sales than for the fact that it was a great game. It combined elements of real-time strategy and action games to create a hybrid that was at once unique, intuitive, and fun. Most everyone who played it loved it. Whatever the reason for Battlezone's disappointing sales, it certainly wasn't the quality of the game. Unfortunately, in what must have been an effort to make Battlezone's sequel more marketable, developer Pandemic Studios attempted to fix something that wasn't broken. As a result, Battlezone II is just a dumbed-down version of its predecessor.

Battlezone was set in the late 1960s during a secret space race between the United States and the Soviet Union. The two superpowers on Earth were attempting to become superpowers on other worlds as well and were fighting to colonize and mine resources from the planets in the solar system. Toward the end of the game, a hostile alien race appeared that forced the warring earthlings to team up against the new threat. Their alliance is the basis for the sequel, which begins with you serving as a lieutenant for the ISDF, a multinational fighting force attempting to combat alien terrorism. Your apparent enemy is the Scion, an alien race that is building some sort of superweapon and destroying ISDF outposts.

However, even from the beginning it is clear that something else is amiss. You are given conflicting orders, put in harm's way more than seems necessary, and then told to remain silent about your operations. There's something going on that's more than meets the eye, and watching the story unfold is one of the more enjoyable elements of Battlezone II.

That the campaign's story is interesting enough to motivate you from mission to mission is a good thing, because Battlezone II's missions themselves are often boring. Whereas Battlezone was entertaining precisely because of the sheer amount of control it put it your hands, Battlezone II is dull because it isn't as flexible. Early missions typically tell you what to do, step by step, and lack any of the base building and resource gathering that made the first game fun. Instead, you just follow your commander around and perform various small tasks and listen to reports of other more interesting activities as they occur elsewhere in the field. The first ten missions in the game feel like tutorials, and it isn't until you've played through at least a dozen missions that you're given the ability to plan and build your base and assemble an army of units.

Even when you finally take control of an army, it feels less significant than in Battlezone. Inevitably, you'll be planning your base defenses and preparing to build offensive units when you'll receive an order to go explore an event happening somewhere else, and you'll have to abandon the strategy portion of the game to go on some solo excursion. In fact, you spend so much time on short solo missions that it seems as if the real-time strategy elements of the game are almost an afterthought. Fortunately, the interface has been significantly improved over Battlezone, which makes it easier to control your other units than before. The only problem with the first game's interface was that it was difficult to assign orders to units that weren't in your line of sight. That problem has been remedied in Battlezone II, which offers a more complete command menu that lets you give a wider variety of orders to both offensive and utilitarian units, no matter where you are on the field. And Battlezone II lets you create building queues and group units together, which makes creating and commanding a large force not only easier, but more useful.

Unfortunately, the improved interface is counteracted by the game's artificial intelligence, which makes units take the most basic approach to every task. Assign a force to attack an enemy, and they'll start blasting away, regardless of whether you or other friendly units stand in their way. In fact, friendly fire is such a problem that it's often dangerous to use large forces when you could just as easily take out the enemy yourself. The same problems affect the units' pathfinding. Ask a service truck to come repair you, and it'll take the shortest route available, even if that means going through an enemy base. Such pathfinding is acceptable in a top-down real-time strategy game in which you can set waypoints, but it's frustrating to have to micromanage your units to safety in Battlezone II's 3D environment. More realistic unit behavior would have gone a long way toward making Battlezone II a better game.

The units of Battlezone II are disappointing in comparison with the ultrapatriotic designs of the original. The eagle-headed tanks adorned with red, white, and blue have been replaced with plain-looking vehicles and more generic science-fiction vehicles such as walkers. It makes sense that the jingoistic designs would be ousted in the face of an army made up of many countries, but the ISDF could have come up with something better than orange, boxy tanks. Likewise, the alien ships are fairly standard, and they display little to distinguish themselves from any other alien race design since the movie Alien. At least Battlezone II's environments are much better than in its predecessor, and the wide variety of battle settings helps make the game more interesting even as the bland missions and the vehicles don't.

Ultimately, by trying to appeal to some mythical mass market, the designers have neutralized the fast pacing and complex mechanics that made the first game so much fun. As a result, Battlezone II seems completely generic. Its missions are short and easy and are filled with scripted events and plot points, but the missions don't actually let you make any interesting decisions. There are brief flashes in which the old Battlezone shines through, but you'll have to be patient to find them. 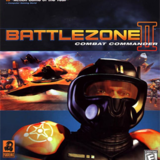