Battlestations: Midway strikes just the right balance between action and strategy to create a game that's as unique as it is enjoyable.

If the gaming gurus at Milton Bradley have taught us anything, it's that battleships are made to be sunk. It's a lesson that the creative minds at Eidos must be familiar with, because the publisher's latest game, Battlestations: Midway, makes sinking the steel behemoths of the sea every bit as satisfying as hearing a friend shout out, "You sank my battleship!" However, Battlestations: Midway is more than a game about blowing ships out of the water; it's an interesting blend of action and real-time strategy that does a remarkably good job of appealing to both tastes.

Battlestations: Midway is set in the Pacific Theater of Operations during World War II. In the single-player campaign, you play as Henry Walker, a Navy recruit who shows up at Pearl Harbor just in time for the Japanese attack in December, 1941. From there, your skills as a commander are put to the test in historical battles such as the Battle of the Coral Sea and, eventually, the Battle of Midway. Between battles, you'll see rendered cutscenes intended to develop a story about Henry Walker's rise through the ranks to eventually become the captain of the massive aircraft carrier known as the USS Yorktown. The dialogue in the story is forced and almost comically bad at times, but the characters do a decent job of personalizing the battles, and it's gratifying to see your recruit go from cruising around a harbor in a tiny PT boat to commanding fleets of ships out on the open sea. There are 11 missions in the single-player campaign, and although some of those missions can easily take the better part of an hour to complete, you can easily finish the campaign in four or five hours. There are 10 extra challenge missions focusing on specific types of units from both the Japan and US forces, but the challenge missions aren't as exciting as the larger story battles. Despite these bonus missions and the inclusion of a very good online multiplayer game, it's disappointing that the single-player campaign is so short.

Although all the battles in the game are sea battles, there's enough variety in the missions and the units at your disposal to provide a unique experience each time you play. You usually start out with a handful of units at your command and a few simple objectives, such as destroying all enemy carriers or defending your airfield. From there, it's entirely up to you how you go about completing your objectives. For the larger battles, you'll probably find yourself spending most of your time looking at the tactical map. It's a small map of the battle area that shows you everything you need to know at a glance. Using this map, you can command all of your ships, subs, and planes to move and attack. It takes a short while to get used to using the map and commanding sometimes dozens of units at a time, but the level of detail isn't so fine as to require excessive micromanagement. The artificial intelligence in the game works very well, and you never have to worry about your units disobeying orders or behaving irrationally. The artificial intelligence is so good that in the larger battles, you'll find the best strategy is to spend about 75 percent of your time commanding units from the tactical map.

The other 25 percent of your time will be spent directly controlling your units, which is every bit as fun as commanding them from afar. At any time, you can take control of any of your units and do the dirty work yourself. You can captain a sub as it stalks an enemy cruiser, take to the skies for an intense dogfight, man the antiaircraft guns on the deck of a battleship, manage the operations of an airfield or shipyard, and more, all in a single battle. The units all have unique controls, weapons, abilities, and limitations that you'll need to learn so as to make the best use of all of your forces. This isn't a simulation game, though, so it doesn't take very long to get a feel for each unit under your control. The ships, subs, and planes don't handle realistically at all, but they are at least fairly well balanced against one another. You can feasibly take an all-action approach to battle and forget about being a commander, but without proper support, you'll have a hard time winning any battles. Taking a hands-off approach works better for developing a strategy, but even then you'll want to jump into the action from time to time. There's a simple but very distinct pleasure to be found in piloting an airplane and swooping in out of the skies to dive-bomb a battleship or pelting the hull of a carrier with a volley of torpedoes from a submarine.

Beyond going on strafing runs and commanding fleets of ships, you are given a few other responsibilities in battle. There are shipyards and airfields in the game, as well as aircraft carriers. You can command ships and squadrons of aircraft to deploy and attack or defend targets. As your squadrons get shot down and your ships get sunk, it's up to you to deploy more. You're usually given a choice of which type of ship or airplane you want to issue, as well as which weapons you want them to use. It's an important decision because certain weapons are better against certain ships. If you need to sink a sub, you'll need to send out some dive bombers equipped with depth charges, and if you want to sink a cargo ship, your best bet is to send out a squadron of torpedo bombers. You can only have a certain number of squadrons, airplanes, and ships active in battle at a time, but as your units are destroyed, you can keep deploying new ones.

As you do battle, your ships will take damage. You can repair the damage by assigning crewmen to focus on certain tasks, such as repairing leaks in the hull, extinguishing fires, or fixing the engines. If your ship's hull takes too much damage, it can't be repaired and will quickly fill with water and sink. Repairing your ships only takes a few seconds, and it doesn't require much effort, but your ability to make quick repairs can greatly affect the outcome of a battle.

The multiplayer game plays just like the single-player game, but with all of the units being commanded by real, live players, the battles can vary wildly. There are nine multiplayer maps, many of which are taken directly from the single-player game. You can play with up to seven other players, each player commanding a specific ship, fleet, or squadron. The battles are all team-based, and you can choose to play as Japan or US forces. Each side has unique units, but they are still balanced. The maps aren't quite as balanced, though, with one side often starting at a significant disadvantage. Even then, sound tactics and good communication between teammates can easily give an underdog the upper hand in a battle. As with any multiplayer game, your enjoyment depends on the people you're playing with, but that goes double here because of the higher level of cooperation and strategy required in these battles.

Battlestations: Midway is available on the PC and the Xbox 360, and the biggest difference between the two games is the price. The PC version is $20 cheaper, which makes the Xbox 360 version a tougher pill to swallow. If you're playing the Xbox 360 version, you can earn some achievements by doing things like using a specific unit for a certain amount of time during a battle, shooting down a number of enemy planes, or sinking a certain number of enemy ships. The controls are intuitive and easy to manage in both versions of the game. The PC version does support gamepads, and playing with the Xbox 360 gamepad works just as well on the PC as it does on the console. Another difference worth noting is that the PC version uses third-party software to connect to online games. The service works just fine, but it's still not as quick and easy as playing on Xbox Live.

The two versions of the game both look and sound good. You can turn up the visual effects in the PC version of the game and get it looking comparable to the Xbox 360 version. Regardless of which version you play, the visuals look good, but they aren't especially impressive. The ships are detailed down to the tiny crewmen walking around on deck, and you can enjoy some nice views of the Pacific islands from the cockpit of a fighter plane. You'll occasionally see some rough spots like when objects suddenly pop into view as you approach, or flat land textures, but for the most part, Battlestations: Midway looks good and runs smoothly. But the game leans more toward real-time strategy than action, so you'll spend most of your time looking at the tactical map. If you're playing the Xbox 360 version on a standard-definition display, you'll probably have a hard time reading some of the text, which can be a problem because there's a lot of small type that you'll need to be able to read. It's not such a problem that it renders the game unplayable, unless perhaps you're playing the game on a very small television.

The score in Battlestations: Midway is rousing and dramatic, just as you'd expect in a game about historical naval battles. The tunes also change depending on whether you're fighting for Japan or the US, which subtly sets the tone in battle. The voice acting in the cutscenes could be much better, but it's not terrible. While you're in battle, you'll hear your subordinates report to you with updates about the condition of your units, and these updates are often the best way to keep track of what's happening. It's also a nice touch that you hear different sounds on the tactical map based on which unit you have selected, which is also a good way to gauge what's happening. If you're playing as the forces of Japan, you'll hear your pilots and captains shout in Japanese, but even if you don't speak the language, it still helps clue you in about one of your ships being in trouble. The explosions and engine noises all sound powerful and distinct, and some of the more intense battles sound particularly impressive, with artillery, torpedoes, bombs, and machine guns all going off at once.

Battlestations: Midway strikes a balance between action and strategy that makes it uniquely appealing. The strategy isn't especially in-depth, but it is accessible and satisfying. The action portion of the game is also kept very simple, which works in the game's favor by making it easy to switch gears between the two different parts of the game. The action is also exciting enough to make it worth your while to jump into battle, if only for a few minutes at a time. The single-player game is sadly way too short, but the online multiplayer game is at least a small consolation. And while it lasts, Battlestations: Midway is a very fun game to play. 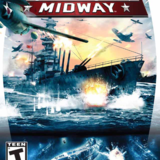