There's just no need for a game like this on the PlayStation in 1997.

Video games can essentially be divided into two distinct categories: long-lasting games that ultimately hypnotize you into full-on obsession, and games worthy of maybe a few plays only when you're in the mood for a quick fix. The former 3DO game and new PlayStation title from Acclaim, BattleSport, belongs to the latter group.

A fast-paced arcade-style affair that recalls the days when games were based primarily on point scoring and survival, BattleSport is a futuristic combination of football, hockey, and space shooter. The rules of this cybersport are relatively simple: two 30-ton hovertanks race around an enclosed playfield trying to recover a bouncing ball and shoot it into the goal for points. Oh, and you can blow each other to bits for added excitement. The action is fast and furious - almost dizzyingly so - but the rush lasts for only a few moments. It's not long before you realize that BattleSport is a pointless game with nothing to work toward - there's no sense of accomplishment after playing.

To its credit, BattleSport boasts a whopping 50 arenas, each with its own unique characteristics and layout. Games can be played with a selectable number of goals or designated amount of time, and after each contest a full list of stats is displayed, including number of fumbles, interceptions, kills, goals, missile hits, etc. A host of intriguing power-ups like blindness (temporarily blinds your opponent) and ball attract (brings the ball closer to you) is placed randomly throughout the playfield. You can select from different types of goals, including two-sided or four-sided and stationary or roaming. While the basic gameplay eventually becomes repetitive, there are enough customizable options and variable details to keep things mildly entertaining for a while.

One of BattleSport's biggest flaws is the controls. Unlike traditional 3-D shooters where you can stop on a dime and pivot in any direction with ease, there seems to some kind of unexplained gravitational pull on your hovertank in BattleSport, often causing you to fly right past the ball even though you appeared to be headed straight for it. It's sort of like flying in a wind tunnel, which lends an unnecessary air of joypad-fighting frustration to the proceedings. And the fact that you're stuck in a cockpit view with no peripheral or rear-view vision doesn't help.

While BattleSport certainly has its moments and is by no means a wretched effort, the fact is that there's just no need for a game like this on the PlayStation in 1997. It didn't work for the ill-fated 3DO - why should it work now? 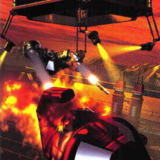 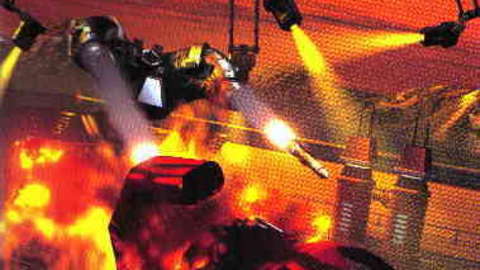 There's just no need for a game like this on the PlayStation in 1997.