If you like wargames and can stomach the price, Battles in Normandy definitely provides enough entertainment to earn its keep

Take one of the best operational-level World War II wargame engines ever devised, improve it, and cross it with one of the most compelling campaigns in military history, and you get Battles in Normandy, the latest entry in SSG's Decisive Battles series. The new game has the same basic engine and gameplay as The Ardennes Offensive and Korsun Pocket, but it incorporates several improvements, including a deadlier computer opponent, a streamlined interface, and much better in-game support, which can be relied on to present answers to most questions with simple mouse-overs.

This turn-based wargame lets players invade (or defend) Normandy in multiple campaigns and scenarios, and many enhancements to the combat engine were made to handle the unique aspects of this epic clash. Naval units can now bombard the coast, which dovetails nicely with a new amphibious operation component that was added to handle the D-Day beach assaults. Fail to clear a path with the US Navy and the boys on the ground are hit hard when they disembark from their landing crafts. The system is specifically devised so that infantry units are more likely to survive an initial assault than are artillery or antitank gun units, which forces players to make realistic decisions regarding the order in which units land.

Aircraft were vital components in the Normandy war machines, and their importance is reflected in this game through interdiction and carpet bombing capabilities. Interdiction existed in previous editions of this series, letting players commit aircraft to disrupting the enemy's supply lines, and here the interdiction model is improved because of changes in the antiaircraft system. The Allies have overwhelming air support, but the Germans can somewhat diminish its effects by committing antiaircraft assets to areas affected by interdiction strikes. This causes some tough decisions for the German player, who needs to decide whether antiaircraft assets are needed more in the rear (to blunt interdiction strikes) or on the front lines (where they were historically used to blast Allied tanks). Carpet bombing is only available at certain times during certain scenarios, and it's tremendously useful for softening up large groups of units. You just have to be careful not to hit your own troops in the process.

This is obviously a complex game, requiring players to make tough decisions at every turn, but the excellent interface makes things much less complicated than they could be. Combat is driven by underlying CRTs (Combat Result Tables), which are spreadsheets that show the battle odds for various types of terrain. A little luck is added by incorporating dice rolls during combat to spice things up. However, as the game progresses, players always have enough information to know if they are making well-informed decisions, taking calculated risks, or gambling wildly.

If looking up combat odds sounds tedious, don't worry. The combat advisor feature that made previous entries in this series so manageable is back. With one click, players can instantly see the overall odds for all possible combat, which are overlaid directly on the game's map. This reduces reams of data to single, meaningful points that are easy to understand but challenging to act upon. For example, seeing good initial odds in several areas along the front doesn't necessarily mean that you can punch through all of those areas on a single turn, because if you commit enough resources to a single attack to put the odds in your favor, it takes those resources away from some of the other areas and shifts the overall odds in further attacks. Also, taking advantage of high-odds attack situations isn't always the best choice, because it can leave the attacker exposed, or it can cause a breach in your lines, which is never a good thing. The real challenge in this game comes from collecting enough units in one spot to successfully attack a weak spot in the enemy's line--but without spreading your forces too thin elsewhere. And here the combat advisor helps you to avoid costly mistakes.

An excellent set of tutorial scenarios is included, but veterans of previous editions can get an immediate feel for some of the changes by jumping into a smaller scenario, like the amphibious assault on Omaha Beach. This is a 10-turn assault that takes an hour or less to play but provides an excellent overview of how the system works. We played from the American perspective, so we bombarded both shore and inland strongpoints with tremendous barrages from offshore destroyers, cruisers, and battleships before bringing the ground forces across the English Channel. Our initial wave of infantry, tanks, recon vehicles, artillery, and antiaircraft guns made it ashore with surprisingly little difficulty, quickly carving out a beachhead and clearing a path for the inevitable reinforcements. Things went very well, until we decided to intentionally create a small gap in our lines to see what the AI would do.

The results were immediate and dramatic. When it became the German team's move, German units poured through the gap and into our rear echelon, where they wreaked havoc among our helpless artillery and antiaircraft units. They quickly brought tanks up to apply pressure on our front-line troops, and although we managed to push ahead somewhat and established a modicum of cohesiveness in our main line, the damage was already done. A few of the units on our extreme right and left flanks were encircled, and with their vital supply line severed, they quickly exhausted their ammunition and died miserably. Moreover, our main force had forged ahead too far in the center and was also cut off from the supply line as German units swarmed toward the beach. It's nice to see a system where real-world weaknesses, like the one we created, are not only exploited by the AI, but also are available for human players to exploit.

Graduates of the smaller scenarios can take on larger challenges, like the full, 32-turn Operation Overlord scenario, which plays out on an enormous map of northern France that extends from Cherbourg in the northwest to Argentan (and a bit farther south) in the southeast.

The graphics are excellent for a wargame. The topographical maps have a pseudo-3D look and are detailed enough that you can easily tell what type of terrain you are about to move into. If there is any doubt at all, you can simply right-click a hex to see a pop-up window that contains the terrain type, roads and rivers that affect the hex, and other information. The nicest aspect of the map is that the entire thing is handcrafted, so instead of using generic terrain hexes that would give the game the look of an old-school board game, each hex flows together to create more-organic-looking graphics. The game doesn't run in a window, which is actually a boon, because it scales to fit any size monitor (using either 1024x768 or 1280x1024 resolution) and looks great even on the 21-inch display we used during most of our testing.

Unit graphics are sharp and legible and contain a great deal of information, despite their small sizes. Players should get familiar with standard NATO unit symbols to get the most out of the game, but mousing-over, clicking, or right-clicking on a unit brings up enough information that anyone can keep their troops sorted out. Sounds effects are limited to typical wargame battle and movement sound bites, and the score consists of some decent period music.

The developer was nice enough to include an updated version of The Ardennes Offensive in this package, which takes full advantage of the new rules and tweaks. Only the main, 28-turn battle is included--there are no smaller scenarios--but it comes with its own map and adds a great deal of value to this package. If that's not enough, any of the included scenarios can be completely customized in the included battle editor.

Despite all of the content that is included, the game's relatively steep price is its main drawback. It is sold only through Matrix Games, so price drops are unexpected. Additionally, for the money, it's a shame that the game doesn't come with any printed documentation, because the full-color PDF versions of the manual and the tutorial handbooks look terrific. If you like wargames and can stomach the cost, however, Battles in Normandy definitely provides enough entertainment to earn its keep. 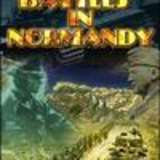