With its great multiplayer action and fleshed-out single-player campaign, Bad Company really isn't bad at all.

In Battlefield: Bad Company, no one is safe. Not a sniper hiding inside a tower. Not a soldier driving a massive tank. And definitely not you, as you bob and weave across a fiery sandbox of destruction. If you thought the action of the Battlefield franchise was intense before, you haven't seen anything yet. Thanks to a fleshed-out single-player campaign, Battlefield's trademark multiplayer action, and a new level of destructibility, Bad Company is quite simply one of the most fun shooters released this year.

With its Frostbite engine, Dice has created a warzone that is almost completely destructible. Nooks and crannies that were once a safe haven in other shooters can be reduced to rubble with a well-placed tank shell or mortar strike. Is a quaint Russian home standing between you and an objective? Blow a hole in a wall and walk right through. The system is not perfect since not all buildings can be completely destroyed. Some materials like brick may crumble to dust, but wood crates will often withstand whole missile strikes. Frostbite has its foibles, but Bad Company still gives new meaning to breaking and entering.

A good place for new players to enter is Bad Company's single-player campaign. That's right, a Battlefield game has a bona fide single-player campaign and not a collection of multiplayer maps littered with AI bots. You play as Private Preston Marlowe, recently reassigned to the 222nd Battalion, B Company, which is a collection of misfits and castoffs that the Army likes to send into battle first. B Company, in short, is expendable. You complete a four-man squad composed of Sergeant Redford, a grizzled veteran who volunteered for B Company so he could retire early; Sweetwater signed on to take advantage of a college scholarship without realizing he may actually have to fight; and Haggard is a country bumpkin and demolitions expert who loves to blow stuff up. Together, you'll fight your way into Russian territory and take out a number of well-guarded installations. When the Army leaves you stranded behind enemy lines--something about plausible deniability--the squad goes AWOL in search of mercenary gold. Along the way you'll rescue a flamboyant dictator that resembles Saddam Hussein on ecstasy, and then make your escape in a pimped-out gold chopper. No, the story isn't exactly the stuff of Stephen Ambrose, but the tongue-in-cheek humor and numerous unlockables scattered throughout the campaign make it worth fighting.

Marlowe is a jack of all trades and can handle any of the weapons and vehicles in Bad Company. Often he'll be in control of a mortar strike or laser designator that can lay waste to entire villages. The designator is meant to be used on heavy armor, but it's hard to resist dropping 50-ton bombs on lone troops just for the heck of it. There's a short recharge time so you don't inadvertently start World War III here, but you'll never get tired of unleashing explosive mortar strikes on our foes.

Your squadmates are full of friendly chatter during the campaign, but they never die and don't work together very well at times. Whereas multiplayer requires you to coordinate with your teammates, single-player feels as if you're truly playing alone, with three characters in the background that only list new objectives and provide a little comic relief. They'll take out a few enemies, man turrets and take cover, but you're doing the bulk of the work. This wouldn't be so much of an issue if friends could jump online for a little co-op, but there's no option to do so unfortunately.

Enemy soldiers are not exactly the sharpest bunch and some have no problem standing in the open, waiting for their own demise. Luckily there are so many enemies and objectives that the game never feels easy, but the firefights would be even more intense if enemies more frequently made use of cover, if only so you could blow it up. Marlowe comes equipped with an automatic health injector that refills your life bar and can be used over and over again after a short recharge. Is stabbing yourself in the heart with this panacea any more unrealistic than regenerating health as seen in Call of Duty 4 and Rainbow Six Vegas? Not really. But it certainly feels cheap plunging that needle into your chest every 20 seconds during an intense battle, something you'll surely do toward the campaign's final few missions that border on ridiculousness. You would think that four Army oddballs versus an entire mercenary force and Russian army equipped with tanks and attack choppers wouldn't stand a chance, but you would be wrong, thanks to the handy health injector.

When you've got the hang of the weapons and gadgets of the single-player campaign, jump into Bad Company's excellent online multiplayer mode. It's called Gold Rush, but it's really just a basic attack and defend mode in which an attacking team tries to blow up crates of gold. If you're successful, a larger portion of the map opens and the attackers push forward to do it all over again. This has been done before in other games, but no one does it better than Bad Company, thanks to absolutely massive maps that support 24 players, a vehicle list that includes tanks, jeeps, choppers, boats, and Humvees, as well as laser-guided rocket turrets and artillery cannons. There are five character classes in multiplayer and each has its own special abilities and unlockable extras that will make you giddy. The specialist can lace enemy vehicles for demolitions experts--their rockets will automatically hone in on tagged targets. The sniper can utilize the laser designator to nullify tanks, and the specialist can drop med kits, repair vehicles, and call in mortar strikes.

It's strange that the conquest mode in which teams vie for points on the map and drain enemy tickets, a mainstay of the Battlefield franchise, is absent. The mode will purportedly be made available as a free download at some point, but it should've been in the game right out of the box. That said, you're not likely to get bored of Gold Rush anytime soon. The maps are perfectly balanced with defensive turrets and offensive weaponry, and often matches are decided by the smallest of margins. This is the kind of game where you call your friends to let them know you somehow sniped an enemy chopper pilot or dropped a missile on the final gold crate on a map for the win. The game would've benefited from more vehicles; there aren't nearly as many on each map as you find in Battlefield 2, so teammates will often fight over fun toys such as choppers. But with its persistent ranking system and unlockable weapons, Bad Company is surely the most addicting multiplayer shooter since Call of Duty 4.

Be sure to crank the volume up to 11--Bad Company has some of the finest sound design out there. A sniper shot echoes perfectly through the mountains, while indoor firefights are so loud you may want earplugs. Visually the game does not fare as well. While it's by no means ugly, there is a strange graininess on each texture. Even looking into the clear blue sky in the first scene of the game, you'll be amazed at how fuzzy it looks. Of course, the destructible environments and exciting explosions make up for any graphical shortcomings.

Battlefield Bad Company is the most fun, addictive shooter released so far this year. While far from perfect, the intense sandbox warfare is something that you have to experience. Dice calls it tactical destruction. We call it explosive fun. 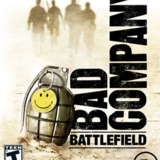 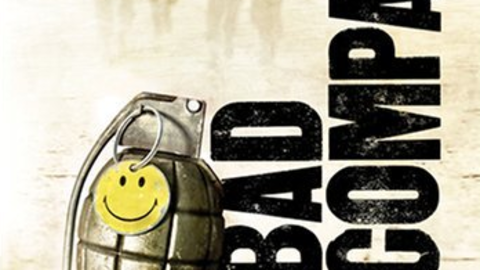 Battlefield: Bad Company puts you in control of a squad of renegade soldiers who infiltrate enemy territory for revenge and profit.