Few games wear their inspiration on their sleeve as proudly as Battle Princess Madelyn does. From the moment you lay eyes on its detailed pixel artwork and see the titular armor-clad Madelyn throwing lances at the creeping undead in a murky marsh, you'll immediately have flashbacks to the classic Ghosts 'n Goblins series. That's not a knock against the game--if you're going to take inspiration for your retro-styled platformer, you may as well take it from some time-tested classics. And when Battle Princess Madelyn is at its peak, it really feels like a worthy successor to those games.

Unfortunately, that fiendishly fun and challenging action game is only half of Battle Princess Madelyn. The other half is a botched attempt to shoehorn large-scale levels filled with traps, tough enemies, and tricky platforming into a Metroidvania formula.

Battle Princess Madelyn finds our rough, tough royal recovering from her family being kidnapped by a wicked sorcerer. In the wake of such tragedy, she sets out to find and defeat the fiend… but she's not alone, as the soul of her deceased dog Fritzy is there to fight alongside her and help revive her when she falls in combat. She'll explore creepy crypts, sprawling caves, volcanic peaks, haunted fields, and dangerous waters in her quest to save her loved ones, and it certainly won't be easy. It's a simple premise, but an effective one, and the ghost dog gimmick adds a nice little dash of originality.

There are two play modes in Battle Princess Madelyn: Arcade Mode and Story Mode. Both options follow the same story but present it in a different way. Arcade Mode is short on dialogue and cinematics and long on fierce action, while Story Mode goes far more in-depth, featuring a semi-open world, story beats to progress through, items and secrets to uncover, and NPCs to interact with. Movement and action in both modes are similar, though in Story Mode, Madelyn has to find items needed to progress and gain abilities; in arcade mode, she has the necessary abilities from the start (aside from optional weapon drops from enemies).

Arcade mode is where you can most clearly see this game's Ghouls 'n Ghosts inspiration. The one-hit buffer of your breakable armor, the various weapons like lances and axes, the unending waves of creeping zombies that make it hard to stay in one place for too long--heck, even Madelyn's running animation looks like they referenced several of Arthur's frames. It does improve on the GnG formula in some key ways, though. Madelyn's double-jump is much easier to control, and her life force--powered by Fritzy's ghostly magic--can be replenished by slaying enough enemies. She can also spend a little bit of Fritzy's magic to perform a homing attack on an enemy, which is a great aid in some of the trickier areas. While the game doesn't really explain these controls to you, you should know well what to do, especially if you've experienced simple 2D platforming before.

The Arcade Mode is easily the best part of Battle Princess Madelyn. It's a tough action-platformer that rewards careful, thoughtful play and features memorable environments, tricky platforming, and some really cool encounters with gigantic bosses. Yes, you do have to restart the whole level if Fritzy's life-giving magic power runs dry, but that's part of the old-school experience. At least there aren't limited continues! Rounding out the retro experience is a great chiptune soundtrack that really helps make the game feel like a forgotten relic. (You could change it to an orchestrated version, but why would you?)

While Arcade Mode is a great experience for challenge-seeking action fans, Story Mode is a pretty heavy disappointment in comparison: a fumbled effort at trying to fit a patient, precise platformer into an exploration-based gameplay mold that often fails in incredibly frustrating ways. Unfortunately, Story Mode is also the default mode, meaning that most folks are going to play it first… and likely have a bad taste in their mouth from it.

Story Mode tasks you with exploring several interconnected areas based on similar design concepts to the ones seen in arcade mode, but with very different layouts. Your abilities are extremely limited at the beginning, and in order to progress, you need to scour these sprawling areas to find routes, items, and NPCs that will help you on your quest.

The problems with Story Mode become obvious from an early point, and only worsen as the game progresses. For starters, the extremely large, hazard-laden areas feature little in the way of checkpoints, meaning that losing all of Madelyn's energy results in a complete restart from the area's entrance--a tolerable setback in a linear arcade mode, but infuriating in an exploration-driven game. In addition, a lot of these areas tend to look very samey in terms of props and backgrounds, so unless the level you're in features a very linear path, you may have some serious trouble figuring out how to get back to a specific location.

In addition, a lot of things just aren't hinted at or explained well at all. One way the game tries to guide you is with a bony skeleton hand that will sometimes pop up to point in the general direction of important items, but it's less useful and more frustrating when the means to get to said items are difficult to discern.

Sticking points like this come up often, particularly when you have to start backtracking to reach previously inaccessible areas with new abilities and especially when you have to do quests for NPCs, some of which are necessary to proceed. It's easy to forget what character needs which macguffin, or who needs to be rescued where, and there's no quest log or intuitive way to remind you of what's needed. Compared to the skill-testing action-game challenges of Arcade Mode, Story Mode's challenges are frustrating in a far worse way: they often fail to tell you just what the heck you're supposed to do, leaving you to wander aimlessly through huge, dangerous maps in hopes that you might find or trigger something.

Battle Princess Madelyn looks and sounds fantastic, and half the game is a delightful spiritual throwback to a beloved action game series. It's a shame that the other half drags down the whole package--and performance issues on Switch like slowdown and stalling when moving through menus don't help, either. There's at least one great game in the Battle Princess Madelyn package, but it's hard to fully recommend it when the game mode that's presented front and center drops the ball royally. 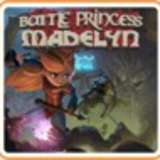 Heidi played through Battle Princess Madelyn on Nintendo Switch. A code was provided by the publisher for the purposes of this review.