Batman: Vengeance may not be one of the year's best overall, but it is one of those incredibly rare birds known as a good licensed game.

Batman games are generally not very good. There. We got that out of the way without having to go through a roll call of video game misfits more freakish and twisted than Batman's rogues' gallery itself. Licensed properties from all kinds of media have suffered when brought to video game form, but few as much as Batman. That said, Ubi Soft's Batman: Vengeance is an anomaly. Some will say that it's the best Batman game yet, while others will qualify it as at least neck-in-neck with some of the Batman NES and Genesis titles. Either way you see it, it's the best Batman game in years, and that's what matters now.

For those keeping track of continuity, Batman: Vengeance is based on Paul Dini and Bruce Timm's smart and stylish cartoon series, rather than on Tim Burton's and Joel Schumacher's films or on DC Comics' comic book series. You play as the "dark knight" himself and enjoy access to all his wonderful toys, including the batmobile, batplane, and batarangs, just to name a few, and you'll need them all to fight the enemies you'll face, such as Mr. Freeze, Poison Ivy, Harley Quinn, and, yes, The Joker. Without giving too much of the game's storyline away, The Joker has apparently set a plot in motion from beyond the grave, and you're obliged to play along in order to uncover his plans.

There are many different gameplay modes in Batman: Vengeance, but most of the time you control Batman from a third-person perspective. You can run, jump, and glide through 3D polygonal environments as you have in many other games, but that's just the beginning. You can position Batman flat against a wall in order to sneak up on an enemy or peak around a corner, as in Activision's Tenchu: Stealth Assassins. Or you can shift into a first-person perspective to throw batarangs at opponents or fire a grappling hook to gain access to areas higher or further away from you. Other modes have you driving the batmobile through the streets of Gotham City, flying the batplane above them, or diving down from tall buildings in order to catch falling civilians before rappelling to safety.

Picking a fight with a thug will shift the action into a 2D/3D fighting mode where combat consists of punches and kicks, powered-up combinations of those two, and supermoves that you learn as you progress. The fighting is simple and straightforward, but it's done well enough to be entertaining and only becomes frustrating when multiple onlookers sucker punch you from behind. A typical encounter with foes consists of entering a room where a few thugs are perched on catwalks. You throw batarangs at them to knock the machine guns out of their hands and then engage them in hand-to-hand combat, handcuffing them once they're down so they don't get back up to fight you again. Add platform jumping, puzzle solving, boss encounters, and some of the other aforementioned modes to the mix, and you've got Batman: Vengeance.

The variety found in Batman: Vengeance is easily the game's best feature. Unlike Acclaim's Batman & Robin (which also had a diverse selection of modes), though, most of the modes come off passably or well. Of course, since the game is neither a dedicated fighting game nor a first-person shooter, those features don't compare to games that only involve those elements, but they get the job done nonetheless.

Batman: Vengeance's drawbacks are its camera, its fluctuating difficulty level, and its final few stages. At first, the game's camera isn't much of a problem. When playing in the third-person perspective, the camera follows you loosely, catching up shortly if you make a sudden turn. You can center the camera behind you with a touch of the R1 button, and Batman's body goes translucent if he's in the way of your frontal view. As you get farther into the game and must platform jump and dodge enemy fire, it becomes apparent that having the camera always center on Batman, save for being able to rotate it manually as in Eidos' Soul Reaver, would work much better. Additionally, Batman is great at running and gliding, but not at precise stops and movements. He is also, for some reason, difficult to keep facing forward during glides. Both of these things make the platform jumping sections of the later levels more difficult than they should be. In fact, while the difficulty level is extremely forgiving throughout most of the game, it becomes so frustratingly hard toward the end that you'll contemplate breaking your PlayStation 2, your television, or both. It's one thing for a game to present a challenge--it's another for it to stack the odds against you and then present you with camera and control difficulties.

That aside, the graphics and sound in Batman: Vengeance are often excellent. The game looks exactly how you'd expect a 3D version of the animated series to look. The cartoon's art deco building designs have been preserved, and its sharply styled characters animate very well. The game's visual effects follow those of the series with numerous instances of soft indirect lighting, as well as the occasional glowing phosphorescence appearing on the walls of Ivy's plant kingdom or creature. The game's environments are sometimes visually sparse, even considering the oft-minimalist look of the show, however. The soundtrack is equally satisfying, with many themes appropriate to the series and with voice work performed by many of its actors. Kevin Conroy and Mark Hamill's performances as Batman and The Joker are especially noteworthy, although some of the other actors sound a bit flat and occasionally muffled.

In the end, Batman: Vengeance succeeds at what it set out to do--it puts you into the role of Batman. Every major aspect of the character is presented in some way in the game. Those looking for that sort of experience should be pleased, but hard-core game players might not appreciate the tribute in the same way. Suffice it to say, it's not competing with games like Devil May Cry and Metal Gear Solid 2, it's competing against Spider-Man and Superman, and in that scenario, it fares pretty well. Batman: Vengeance may not be one of the year's best overall, but it is one of those incredibly rare birds known as a good licensed game, and hopefully it marks the end of what has been, until now, a disappointing trend in Batman games. 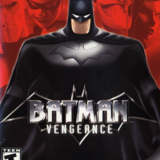