Batman: Chaos in Gotham does well by following a storyline that would have appeared in the comic book or animated series and dressed it up with an assortment of gaming styles and a deep level of control.

In Batman: Chaos in Gotham, the Dark Knight returns to once again wage war on the criminal element in Gotham City. The latest sinister event in the city is a familiar one to fans of Batman and his comic books, cartoons, and games. The most dangerous villains of the city have broken out of Arkham Asylum and are again wreaking their individual brands of havoc. Finding the police utterly powerless to stop them, Batman must track each and every one down and return them to their always temporary home in Arkham.

Batman, as much as he may wish for solitude, finds himself surrounded by a robust cast of characters in the game. Joining him in his fight are a few of his better-known Gotham knights: Robin, Batgirl (who is the only other playable character), and Nightwing. There is also a supporting cast of essential allies, consisting of Commissioner Gordon, Rene Montoya, the cynical Harvey Bullock, and Bruce Wayne's trusty butler, Alfred Pennyworth. On the opposite side are the renegade criminals: Mr. Freeze, Poison Ivy, Roxy Rocket, The Penguin, Bane, and the clown prince of crime himself, The Joker. There is also another mystery villain, whose identity will not be revealed until the final levels of the game. This serves well as a carrot to dangle in front of gamers--to keep them coming back for more.

Batman has a fairly large number of attacks and other forms of offense and defense available to him. The control in the game is pretty tight overall, but it does hiccup on a few odd occasions. One example is when you find yourself mysteriously unable to grab ledges that are well within reach.

The attack button defaults to a jab, but when you hold the up button and then press the attack button, Batman will throw an uppercut. If you hold the down button, Batman will drop into a crouch, and if you then hit the attack button while holding the down button, he will perform a sweeping kick. Batman can also pull off a jump kick, a forward somersault, a rush attack, and a handful of other moves. Of course, one of Batman's greatest assets is his nifty tool belt, which in this game comes equipped with batarangs, the trusty grappling hook, and stun bombs.

The sound is pretty good, and the music is decent, if repetitive. The sound effects for punching, kicking, and other such moves are pretty standard, although for some reason, at times they seem to disappear when you're attacking an enemy. The music is strangely absent from the cutscenes as well. The graphics, while nothing phenomenal, do a good job of capturing the Batman/Gotham atmosphere. Batman's character animations are top notch; the way Batman flourishes his cape when using the grappling hook or when completing a level is especially good. The level design can leave much to be desired at times, though, and on some levels it can even be difficult to distinguish what a platform is or what is merely part of the background.

Not all the levels are standard platforming fare, though. Batman is also known for his arsenal of vehicles, and some of them make an appearance in the game to mix things up and boost the replay value. The batcycle takes a Road Rash-style approach (you need only avoid enemies), and the batmobile takes the direct overhead view. The Jet Wing serves up what is essentially a side-scrolling shooter level, and the batboat is basically the same level as the batcycle; just remove the blacktop and replace it with water. All these levels are pretty fun, and they do their job of keeping things interesting quite nicely.

One last thing of note is the difficulty. This game can be pretty hard and may turn some gamers off. It takes a little while to get used to the variety of moves, but even after you master them, the game still manages to be somewhat difficult. Running straight up to enemies and punching them out is not always the wise way to do things; you may want to hang back and throw a batarang to dizzy them first or lay a stun grenade for the more persistent foes to walk over.

Overall, Batman: Chaos in Gotham is a game that does well by following a storyline that would have appeared in the comic book or animated series and dressed it up with an assortment of gaming styles and a deep level of control. In doing this, it manages to avoid some of the trappings of many lesser Batman video games and delivers a reasonably fun gaming experience. Batfans are sure to gobble this game up, and most handheld gamers will enjoy it as well. 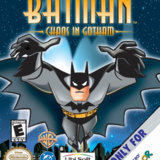