Not only is Batman Begins a great Batman game, but it's a great game in general.

In Batman Begins, you control the Gotham hero, staving off the attacks of mob boss Carmine Falcone in a series of missions that could very well have been lifted from the upcoming movie. Although these two characters are the only two from the movie that you'll encounter through the game's five levels, Batman Begins for mobile does such a good job of representing the classic gritty Batman atmosphere that you won't find much missing in the way of the franchise at all. In fact, not only is Batman Begins a great Batman game, but it's a great game in general.

Like any well-done Batman game, of which there have been remarkably few, Batman Begins distinguishes itself with a heavy emphasis on the license's unique style. Most notable is the comic noir cityscape backdrop, against which a stealthy Batman is positioned, a character who does good in a way that can't help but look like it is bad. The animations in the game are particularly good, from the way Batman's cape moves when you crawl or glide through the environments to the designs of the objects and characters with which you can interact. The graphics might have benefited from a closer resemblance to those in the movie, but the game looks excellent regardless. When it is apparent, the sound is equally well done. The music, which plays on the title screen and during cutscenes, is nice but completely understated on the LG VX7000, and there are very few sound effects in the game at all. The game could have benefited with a little more work on the sound, since all of the sound is either good or just not particularly noteworthy.

The gameplay is 2D side-scrolling stealth action in the truest sense, meaning that there is a completely equal balance between the stealth and action elements. You'll be able to sneak by quite a few enemies without having to confront them, and there will be plenty to fight before being able to continue on. Although the life meter, and keeping your health high, is a big factor in the gameplay, there is an alert meter, which is also important and indicates how aware the enemies are of your presence. Having a high-alert meter for a long time will result in point loss and even mission failure, since there is an underlying theme requiring you to do all the missions stealthily, if possible. However, stealth doesn't mean just running away in Batman Begins. The game rewards you for coming up with creative ways to kill enemies, without them seeing you first. This can either be done by sneaking up behind patrolling enemies when they're facing the opposite way, or by pulling off one of the more-complicated maneuvers, such as the glide or grapple attacks. Both of these moves can be executed with a combination of platforming and attack maneuvers, and when pulled off successfully will provide you with point bonuses at the end of the level.

Not all of the gameplay is combat, however. The majority of the game you will have to wander through environments, platforming up and down building rooftops and inside warehouses as you try to find the level's objective. All five of the levels require that you make it from one end of the environment to the other, but what you do within each level varies. For example, on one level, you must get to the exit, but on the way you must also find, access, and defuse six bombs that have been strewn about. At your disposal are a few different items from Batman's utility belt, including a grapple hook for high jumps, batarangs to attack enemies and sever cords, and flash powder that will temporarily stun the enemies to make them more approachable. In true caped-crusader fashion, your goal is not to kill everyone, but to disable them, so it is important that you tie up your enemies after attacking them, or they'll resurface and cause you trouble later. Tying them up is very easy to do and requires no resources...you simply must kneel by them, and they'll be incapacitated for the remainder of your time on the level. On later levels, you will use your cloak to glide across to other portions of the level without having to suffer damage from falling. Anytime you need to use any of the game mechanics, Alfred will provide an onscreen indicator as a hint, although you don't need the indicator in order to use them.

The one drawback of Batman Begins is the length and lack of modes. The five levels can be completed rather swiftly, and there's no reason to play them again, nor are there any other modes to enjoy. This is too bad because the gameplay itself is quite good. It is full of variety, consisting of action and stealth elements, as well as traditional and specialized platforming mechanics. Add to that a solid visual appearance and a story that ties in to a huge upcoming summer movie, and you have a recipe for success. To top it all off, Batman Begins is just plain fun. You don't need to be a big fan of Batman in order to be a big fan of Batman Begins. 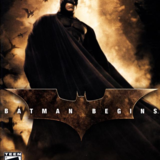