Only as good as the world allows it to be.

"A clean shot to the head," drones the villain known as Arkham Knight. "That's all it will take." At every opportunity, the Knight speaks of the horrific deeds he might perform, doing his best to drive fear into Batman's heart throughout the open-world adventure game that features his name. Scarecrow similarly trades on Batman's doubts, attempting to convince the troubled hero of his own impotence at every turn. "All eyes, all hopes upon a man who fails his friends," calls out Scarecrow through Gotham's public networks, reminding Bruce Wayne that he, too, bears responsibility for the losses his loved ones endure.

Batman is a troubled hero, and past Arkham games haven't shied away from exploring his dark side. Arkham Knight is no exception: the caped crusader growls his way through one confrontation after another in which he must question his role in Gotham's current crisis. We've seen these themes before, many times over, and Batman: Arkham Knight's villains repeat them ad nauseum, as if you weren't already choking on heavy-handed metaphors at every turn. It's fortunate, then, that Arkham Knight, for all its ham-fisted storytelling and frequent returns to well-trod ground, features the qualities developer Rocksteady has infused its previous games with: superb production values, hard-hitting combat, and a wonderful sense of freedom as you soar above the skies of Gotham.

Scarecrow, Arkham Knight, and the legacy of the now-dead Joker loom large over this freedom. There is another, more surprising obstacle which you must overcome if you wish to retain your ownership of Gotham's skies, however: the Batmobile. For the first time in this series, you can leap into the iconic vehicle and zoom down the streets, drifting around tight turns and pursuing key vehicles as they speed away. The driving itself is slick and satisfying, as long as you can overlook Rocksteady's tendency to wrest away camera control to show you some dramatic sight or another. Yet there's no beating the incredible rush of using your line launcher to fling yourself through the sky--and it's worth mentioning that taking to the air is usually faster than settling behind the wheel. As a result, Arkham Knight is constantly trying to justify the Batmobile's presence, forcing it upon you at nearly every opportunity.

Particularly in the latter third of the story, you're frequently forced to take part in vehicular battles against remotely manned drones. When you first engage in this kind of combat, which turns the Batmobile into an agile tank, it's a delight. You strafe from side to side, sliding the vehicle into safe areas between the visible lines that indicate the path of incoming enemy rockets. All the while, you fire your cannons at the drones and use small fire to eliminate missiles fired upon you; the dark sky lights up during these battles, giving vehicular combat an initial spark, and making you the director of a spectacularly violent fireworks display.

But in spite of the upgrades the Batmobile earns over time--EMP blasts, the ability to hack enemy drones, and so forth--the Batmobile battles never become more interesting, just more monotonous, as they seem to go on forever. The story's final hours succumb to a series of same-ish battles that play out more or less like the last, lending an air of tedium to what should be the game's most poignant surprises. The Batmobile is also the centerpiece of a number of mediocre boss encounters, all manner of puzzles, boring cat-and-mouse games with superpowered tanks, and even some of the Riddler's many optional challenges scattered across the city. Don't be surprised should you end up muttering to yourself, "Too. Much. Batmobile."

Arkham Knight is at its best when you are given the freedom of movement you both need and deserve. What a treat it is to look down upon this beautiful and derelict city as you glide through the thick, black air. Gotham has been deserted by most citizenry due to Scarecrow's most recent threat to release a hallucinogenic toxin into the streets, making the clouded heavens and the stoic statues all the more imposing. The bat-symbol cuts an impressive silhouette in the sky, drawing you towards your next mission objective--and the objective itself may be a structure like the grandiose Panessa Movie Studios, where climbing ivy and guardian statues warn you of potential danger.

Arkham Knight is constantly trying to justify the Batmobile's presence, forcing it upon you at nearly every opportunity.

Batman is beautifully animated and an absolute joy to control. To soar towards Man-Bat and tackle the shrieking beast in one of the game's many side missions, and to zip to higher vantage points only to descend onto a rioter and deliver a hard kick, are the moments that represent Arkham Knight at its very best. Every mechanical edge is oiled to maximum slickness: Batman glides through Gotham with the confidence of an experienced predator, and exhibits the exact right amount of stickiness as he approaches surfaces. There is an astounding amount of flavor voiceover; Batman comments on the task at hand should you try to leave the area you are confined to, enemies remark on the number of fallen comrades they have counted during stealth encounters, and the annoyingly chatty thugs swarming the streets have more speaking lines than any number of film scripts. Few games are this rich in audiovisual details.

Don't forget: Batman isn't killing anyone in his rampage against Gotham's enemies, though he delights just enough in breaking bones that it's hard not to nod your head along to the Arkham Knight's insistence that Batman is just as responsible for Gotham's dereliction as anyone else. The storytelling gymnastics the game performs to remind you that Bruce Wayne is not a murderer are ridiculous. The Batmobile is using nonlethal rounds, you are told, and when you run over criminals, a little zap lets you know that you're not squishing them under your tires, just giving them an electrical jolt as you pass. I could dismiss this mounting nonsense easily as forgivable video game logic if the narrative didn't devote so much time explaining (and re-explaining, and re-re-explaining) that Batman lives by a non-killing code. Rocksteady tries to have it both ways, representing this code as an emotional conflict that figures heavily into the story, then letting you plow through crowds of bad guys without consequence. Even in the oft-illogical world of video games, the dissonance is striking.

Then again, this is a story about a billionaire in a bat suit, so perhaps there is only so much plausibility to be expected. It might be hard to believe Batman isn't sending men to the morgue during Arkham Knight's melee battles, but the series' rhythmic hand-to-hand combat continues to set the bar high. Batman is a frightening, almost otherworldly creature as he tumbles and slides from one target to another, and his fists exhibit the raw power of any hammer or club. Stealth combat sequences, which offer astounding flexibility in how you approach enemies, are as good as ever. Slinking through vents, taking down a goon, and zipping away is as rewarding as it is to sabotage your armed foes with your disruptor rifle, causing their weapons to malfunction and leaving their owners open to attack. Smart level design and a large array of gadgets--a remote electrical charge, a machine that emulates villains' voices, a hacking device, and so forth--keep each predator room as interesting as the last.

Batman's many talents give rise to a terrific amount of variety. He is a scientist and a detective in addition to being Gotham's scowling savior; he has a computer that knows the answers to every imaginable question (except the ones that drive the plot, of course); and he possesses the memory of an elephant rather than a bat--a nice skill to have when solving the murder mystery that serves as one of the game's better side plots. Arkham Knight finds great ways of incorporating these talents into gameplay. For instance, you re-create a kidnapping by activating the returning bat-vision mode and scouring the street for clues. The crime's events are then depicted on screen, allowing you to forward and reverse through them at will in your search for answers.

Puzzles like this are clever, and the related tasks, such as scanning a corpse's tissue to find anomalies, make you feel like an active participant in a real forensic analysis. The game constantly digresses, asking you to team up with comrades like Nightwing and Robin to deliver cooperative beatdowns, and to perform all number of secondary missions, which incorporate villains like Penguin, Two-Face, and Firefly. Some set pieces, such as one in which you defuse a set of bombs as a villain stands on a rotating platform, are particularly noteworthy for smart use of camera angles, and for the way the gameplay assists in characterization, teaching you about the miscreants at hand not just through dialogue and plotting, but through the way you interact with them.

Arkham Knight is loaded with villains, actually, including the one that gives the game its name: Arkham Knight himself. His identity is meant to be the game's greatest mystery, but conspicuous foreshadowing, and a reliance on age-old storytelling cliches, make every reveal as surprising as the time The Mighty Ducks won that big hockey game. There are some tense story beats and moving events, but your two primary goals--to stop Scarecrow's evil toxin plot, and to confront and unmask the Arkham Knight--are too predictable to be compelling.

What Batman: Arkham Knight does well, however, it does really well. Gotham is a dazzling playground where neon lights pierce through the rain and mist; all it takes is a single glimpse to tell you that this is a city in need. Moreover, many individual elements are so carefully constructed, and presented with such flair, that appreciation is the only reasonable reaction. Yet most of these elements--excellent acting, wonderful animations, moody soundtrack--are ones that Batman: Arkham City also excelled in, making Arkham Knight's missteps all the more noticeable. Rather than escape the pull of the games that spawned it, The Bat's newest adventure refines the fundamentals; it is a safe but satisfying return to the world's most tormented megalopolis.

View Comments (2987)
Back To Top
7
Good
About GameSpot Reviews

Kevin is now well into a new-game plus in Batman: Arkham Knight, and has spent about 30 hours with the game in all. He played the PlayStation 4 version provided by WB Games on a debug console. He welcomes debate on whether Arkham City or Arkham Asylum is the better game, but scoffs at anyone who thinks it's Arkham Origins. 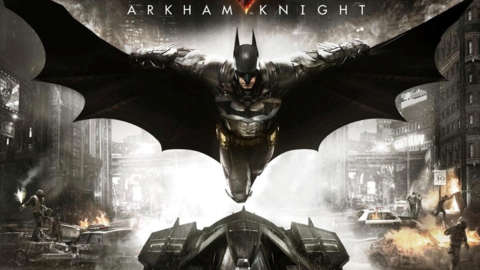 Batman faces the ultimate threat against the city he is sworn to protect. The Scarecrow returns to unite an impressive roster of super villains, including Penguin, Two-Face and Harley Quinn, to destroy The Dark Knight forever. The game introduces Rocksteady's uniquely designed version of the Batmobile---drivable for the first time in the franchise. Batman: Arkham Knight offers gamers the ultimate and complete Batman experience as they tear through the streets and soar across the skyline of the entirety of Gotham City.