The tried-and-true gameplay of Arkham City makes Harley Quinn's Revenge enjoyable, but a limited scope and an underdeveloped story prevent it from soaring.

A Batman's work is never done. He may have dealt with the Penguin, Hugo Strange, the Joker, and the other supervillains who plotted schemes within the open-air megaprison of Arkham, but in the wake of those events, a new threat has arisen. For reasons that need no explanation if you've played through the story of Batman: Arkham City, Harley Quinn has it out for Batman in a big way. Harley Quinn's Revenge gives you a decent excuse to return to the immensely satisfying combat of Arkham City, and lets you play as Robin in a narrative context (as opposed to challenge rooms) for the first time. But unfortunately, this downloadable content feels restrictive in comparison to the original game, and it ends with a weak final confrontation that makes this a disappointing note on which to bring the Arkham City story to a close.

Like the original game, Harley Quinn's Revenge jumps between characters, but it adds a new narrative twist by jumping back and forth in time. You begin as Robin, who has ventured into a shipyard that has been taken over by Harley Quinn and her thugs. Chatter between Robin and Oracle establishes that in the two weeks that have passed since the events of Arkham City, Bruce Wayne has seemed depressed and unwilling to talk about the lives that were lost. The concept of Batman coming a bit unhinged and struggling with his emotions is exciting, but Harley Quinn's Revenge never develops it. It serves no purpose here other than to plant a seed in your brain about what condition Batman might be in when a sequel rolls around; within the context of this DLC, it just resonates with untapped potential.

As Robin, you make your way through Harley's base searching for Batman, who disappeared a few days earlier while trying to rescue some police officers Harley had kidnapped. Robin has a few unique gadgets, like the snap flash, which you can plant on unsuspecting baddies and then detonate to stun them and other nearby enemies, and a bullet shield that lets you withstand assaults from turrets for a limited time. On the other hand, he can't pull off all of the techniques that Batman can; he lacks the ability to do an inverted takedown, for instance.

But for the most part, playing as Robin feels just like playing as Batman. That's not a bad thing, of course. Arkham City's combat hasn't gotten any less hard-hitting and rewarding in the months since the game was released, and Robin's animations have him making graceful and brutal use of his metallic bo staff to hit and knock out enemies. But there's little freedom here; you use your shield when you need to and you fight enemies when you need to, as you're ushered down the narrow hallways and through the larger but still confined rooms of the shipyard.

Soon, the game flashes back to two days prior and puts you in control of Batman, revealing the circumstances that led up to his disappearance. Here, gameplay opens up a bit. Though you're restricted to the area around the steel mill where Harley Quinn is apparently holding the police officers she's kidnapped, you get to enjoy the freedom of Batman's glide and the satisfaction of diving into enemies from high above. The air around the mill is thick with the piercing lasers of sniper rifles, and the ground is crawling with thugs, so you have incentive to employ the full range of Batman's abilities as you work your way into the facility. It doesn't introduce any hazards you haven't already dealt with if you've played through Arkham City, but it's nonetheless a tense scenario that makes stepping back into the batsuit exciting.

The steel mill is a familiar location, having served as Joker's base during Arkham City. But it's worth revisiting; once you're inside, you see that Harley Quinn has made it her own, and a few of her decorative touches offer a disturbing glimpse into the state of her psyche. This DLC moves along at a snappy pace from this point on, jumping back and forth between its two playable characters and including challenging brawls against huge, varied groups of enemies, stealthy standoffs against patrolling guards, sections in which Batman must follow blood trails and interrogate thugs, and a race against the clock to find and defuse bombs.

This is all reliably engaging; if you enjoyed doing these things in Arkham City, you will find them no less enjoyable here. But the final confrontation these activities build up to is incredibly basic, and the cursory ending leaves the story's most fascinating elements unexplored. Additionally, the overwhelming majority of this DLC takes place indoors; you rarely get a chance to spread your batwings and experience the openness that helped make Arkham City so extraordinary. Once the credits roll on this roughly two-hour adventure, it's over; there's no option to continue exploring its locations, and the 30 balloons you can hunt down and pop aren't a compelling reason to return to Harley Quinn HQ. Fighting evil in Gotham still feels heroic, but this isn't the conclusion Arkham City deserves. 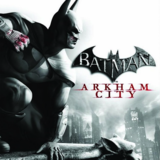