The frustrating controls ruin what would have been a perfectly good fishing game.

BASS Strike for the PlayStation 2 is a game that gets the lofty distinction of being the first of its kind for Sony's newest console. For the most part, this outing on the lake is very similar to what Dreamcast owners found in Sega Bass Fishing 2, with several differences, both good and bad. Those uninitiated to the genre will most likely be pleased with what they find, provided they are able to overcome a few obstacles within the control scheme.

BASS Strike contains many of the features found in Sega's recent release, Sega Bass Fishing 2. While Dreamcast owners are no strangers to fishing games, players with PlayStation 2s have been, up until now, left high and dry. Some of the same features you can expect in this game are huge lakes to explore by way of a powerboat, as well as varying weather conditions that have a direct effect on how hungry fish will be. The five available lakes are expansive and provide more than enough fishing holes to keep even the most avid video anglers happy.

Most gamers will be kept busy for quite some time by BASS Strike's three modes of play: free fishing, arcade, and tournament. Free fishing gives you the ability to explore any of the five lakes in an untimed stay on the water. From here, you can hone your skills before moving on to the more challenging modes. Arcade mode pits you against a computer-controlled opponent to see who can catch the most fish in a limited amount of time. Tournament mode provides even more depth by extending the allotted fishing time to two days (of game time) for catching the most--and biggest--bass on the lake. Arcade mode hosts unlockable characters, one of the mainstays of the genre. By successfully besting an opponent over the course of five rounds, you can then unlock up to five more playable characters.

BASS Strike also has two vastly different difficulty settings, amateur and professional. Amateur mode is the video game equivalent of the old adage "Like shooting fish in a barrel." When you're playing the game in this mode, your view is changed to split-screen--here, your boat is displayed on the top half of the screen and everything under the water on the lower half. Rookie anglers can use this mode to get a hang of where the fish like to spend their time, but for the most part, this aspect takes most of the fun out of locating fish. Professional mode, on the other hand, gives you more of a challenge (without split-screen), and fish are a little more finicky when it comes to taking the bait.

While BASS Strike contains all the components for a solid fishing game, its control scheme really hurts it in the long run. Possibly the most key aspect of the game, reeling in and landing fish, is controlled by making a circular motion on the right analog stick. In theory, the idea sounds not only novel, but also feasible. In practice, however, it really doesn't work so well. Successfully landing a fish requires some practice before you can actually start reeling in the fish. There is an option to switch the control scheme to "linear" or to just pull back or push forward on the right analog stick to reel in fish, but this doesn't aid the situation much because the analog stick is sensitive--so much so that most of the time, even the slightest touch will apply too much pressure to the line and will cause the fish to fall right off the hook. This disappointing aspect makes the game much more frustrating than it needs to be, and honestly, most gamers probably won't have the patience to get the hang of either of the control schemes.

Graphically, however, this game is quite impressive. The five available lakes, while being expansive, are also full of detail, with reeds, rocks, and the like. The fish look very realistic, with nice textures and animation, and look very much at home under the water. It also seems as though a lot of time has been put into making the water and weather effects look good. In terms of gameplay, BASS Strike may be difficult, but it is quite nice to look at. The music--an interesting combination somewhere between electronica and samba--doesn't really sound at home, as it is more of something you'd hear on a crowded dance floor instead of a serene lake. These drastic extremes between aspects that do and don't work make this game difficult to get comfortable with.

All in all, BASS Strike offers a nice amount of depth with its massive, detailed lakes and challenging gameplay. On the other hand, it has a control scheme that makes the game way too hard to play. While the Sega fishing games were very easy for just about anyone to pick up and play, BASS Strike has a learning curve that may be too steep for the average gamer to climb. To put it bluntly, the frustrating controls ruin what would have been a perfectly good fishing game. 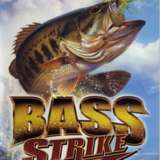