Blowing up in your face.

Basement Crawl opens with a cutscene that promises horror and perhaps a bit of mystery. A grandmother sternly tells her granddaughter of the dangers that lurk outside their home, though the grandmother's warning is itself tinged with a sinister tone. What has happened to the outside world? How have these two people survived? Is the grandmother evil? What are these horrific creatures that we're getting glimpses of?

Then you start the game and find a lackluster, multiplayer-only Bomberman clone bereft of features and personality. Any promise the premise had is immediately lost, and disappointment--not terror--lurks around every corner.

Basement Crawl is a grid-based game for multiple players in which you bomb things. As one of four different characters, each with slightly different starting stats (one is a bit faster, one has a bit more health, and so on), you lay down bombs--sorry, "traps"--which explode in straight lines in four directions: up, down, left, and right. You can collect power-ups for longer explosions, kick traps away from you, and hide behind a predictable pattern of unbreakable blocks, all in an effort to kill the opposing players over and over again.

If this sounds familiar, then you've probably played a Bomberman game before. Basement Crawl may call its bombs traps, but even the game's dark visuals can't hide the fact that this is just Bomberman with a shoddy horror theme.

Basement Crawl's biggest problem isn't that it's derivative, however; it's that it gives you no options. Never mind that there is no single-player mode whatsoever, not even an option to play against bots for practice. There simply aren't any settings to toggle for what kinds of rules you want to play by. Even when you create your own custom game (which is likely, since there's no matchmaking), you can't set options like match time, the number of kills needed to win, whether or not certain power-ups are disabled, or even a player limit. Your only options are Deathmatch or Team Deathmatch. That's it.

Want to limit your online match to four players, because you think having eight players in a match is too hectic and not very fun? Too bad. Want to disable the ability to kick traps, because that's all some players ever use? No dice. For having been inspired by a classic party game, Basement Crawl sure doesn't want you to have any chance at forming house rules. But hey, you can take your room full of four local players and join online matches with them, so that's something, right?

One thing you do get to choose is the arena, though differences between arenas are negligible and almost entirely cosmetic. They come in three flavors, with a few different grid shapes for each: Restaurant Dungeon, Abandoned Circus, and Forgotten Factory. Notably, none of these environments is a basement.

One thing all these environments have in common is that they are dark and cramped. So dark and cramped, in fact, that it's easy to lose track of the action. A pillar of light highlights your location when you spawn, but if you lose track of your character after that first moment, good luck finding it again. It's bad enough that there are only four characters to go around for eight players, but they're not visually distinct enough from each other to quickly pick them out in the dark environments anyway. There is often so much happening onscreen--much of which looks too similar to its surroundings already--that you lose track of the action constantly. As you play, you hear people screaming and a creepy child laughing, but none of it is the least bit effective at delivering on the premise of horror.

The only sense of progression is the ability to play online against strangers in an effort to increase your online rank. But since there's no form of matchmaking, your rank means very little. And if you want to increase it at all, you have to actually win matches--as in, win first place in Deathmatch (or as a team in Team Deathmatch). Otherwise, you get nothing. Reaching the maximum rank of 30 could take a very long time.

To top it all off, Basement Crawl is buggy at worst and unfinished at best. For example, when you pause an offline game, the action pauses, but the match timer keeps ticking down. How do you get the act of pausing wrong? It has been a while since a good Bomberman game was released, and nobody else seems to be interested in mimicking that classic gameplay. If you can get a solid group of four local Bomberman fans, and you have no desire to change any of the game's standard settings, you can have some simple fun blowing each other up. But if you're really desperate for this kind of experience, you're better off hunting down just about any Bomberman game from years past, rather than getting dirty crawling through the muck in this basement.

View Comments (44)
Back To Top
3
Bad
About GameSpot Reviews 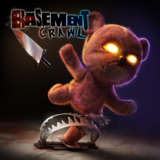 Britton Peele lives in Texas, where basements are practically nonexistent. Therefore, he has never crawled in one, but if he had one, he probably would have used it to play Bomberman with his friends all day. He played dozens of Basement Crawl matches before writing this review.