Like so many of the early NES sports games, Baseball hasn't withstood the test of time.

Following Soccer, Tennis, and Ice Hockey, Baseball is the fourth NES sports game from Nintendo to hit the Wii's Virtual Console. While even after all these years Ice Hockey is still a blast to play, time wasn't so kind to Soccer and Tennis. And now time has claimed another victim: Baseball.

Like the other early first-party sports games for the NES, Baseball is a bare-bones re-creation of the sport. You can play single-player against the CPU (there's no difficulty option) or take on a friend in two-player mode. There are six teams to choose from--you may know their names from a little thing called "the alphabet." Yes, the teams are simply named A, C, D, P, R, and Y. Other than having different-colored uniforms, there doesn't appear to be any difference between the teams; there are no player names, nor are there any statistics to speak of.

The action on the field is simple. You can throw different pitches, such as a curve or fastball, by pressing a direction on the D pad before the pitch is thrown, and while the pitch is headed toward the plate you can move it left and right. Fielding is handled by the computer, but you do have to throw the ball once the fielder has picked it up. Hitting is just as easy. You can move the hitter around the batter's box, swing with the press of a button, and lay down a bunt by letting off of the swing button before you've completed your swing.

This may sound all well and good, but there are a number of issues that make Baseball not much fun. It's pretty boring watching the computer field for you; every player is exactly the same, so there's not much strategy involved; and base runners are very slow--it's not uncommon to get thrown out at first base on a ground ball hit deep into the outfield. As the graphics are about what you'd expect from a NES game circa 1985, there's not a whole lot to get excited about from a visual standpoint. But there are a few nice touches, such as large player models and umpires signaling home runs. You'll hear the familiar tune that played during the title screen of many early first-party NES games, and there are a handful of simple sound effects. But that's about it.

If you spent hours of your youth playing Baseball it may be worth $5 as a piece of nostalgia, but anyone looking for an enjoyable game will likely be disappointed, as Baseball is just too simplistic. 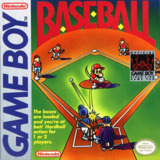