Uninteresting characters, a poor storyline, and some problems with its gameplay mechanics serve to bring Barbarian down.

Barbarian is an attempt at re-creating the manic formula that Capcom used for its Powerstone games, but with a hack-and-slash theme featuring ancient castles, wizards, demons, and more. You'll take on several opponents in a variety of environments, in which you can move around in any direction and even use and interact with certain objects, like rocks, clubs, or even stone pillars. Barbarian executes the most basic elements correctly, but unfortunately it ultimately falls short of its intentions. Uninteresting characters, a poor storyline, and some problems with its gameplay mechanics serve to bring Barbarian down.

There are only three gameplay modes to choose from in Barbarian--practice, quest, and versus. The practice mode teaches you the basics of the game--for example, how to use the magic system and the counter-and-combo system, as well as how to interact with objects in the environment. In practice mode, you're given a computer opponent who essentially stands completely still while you attempt the skill being described. If you successfully complete the skill, the game will kick you back out to the practice menu screen--so if you want to repeatedly practice a specific technique, you need to reenter that particular section and go through it again. The practice mode also offers a full AI opponent in a battle where neither participant loses energy, but as you'll quickly find, almost everything learned in the practice sessions goes flying out the window when fighting a real opponent.

In Barbarian, you can execute several different combinations, depending on the order that you press the weak and heavy strike buttons. Some of these combinations can be used to lift opponents into the air or to stun them. When you've successfully executed a combo, you'll be granted a rune based on the type of combination. So, for example, if you just threw an opponent, you'll be given a throw rune. If you've just executed a basic combination of moves, you'll be given a different rune. Essentially, these runes function as special magic attacks, giving your character the ability to perform techniques that range from damage shields to unblockable strikes. You'll also have access to some basic magic attacks in the form of projectiles, but these can drain your magic power quickly, so you can't just stand at a distance and fire away.

It sounds like a solid gameplay system, but none of it really matters because regardless of how you try to play the game, every fight almost always comes down to just using a specific combination, blocking counterattacks, and then using the same combination again. In Barbarian's quest mode, some of the fights have special conditions in which your character may be poisoned. Or the opponent has the ability to regenerate energy--but even then, you'll fall into the same cycle. Suffice it to say, this makes Barbarian's gameplay pretty tiring, and even if you try to go out of your way to vary your attacks, the enemy AI seems to entice you right back into the routine because of the way your opponent fights.

The aforementioned quest mode has some good points. Each of the 10 characters in the game has a separate storyline that unfolds differently, depending on the fights you select. At the end of each fight, you can also spend some points on a few different character attributes, such as strength and energy. However, the storyline in the quest modes is told through boring, sometimes poorly written dialogue sequences in which a narrator simply reads the text that scrolls up the screen. In addition, the branching storyline aspect isn't handled particularly well because, in some cases, the storyline that you were engaged in beforehand will end abruptly. There's little transition, if any at all. Lastly, the character-building aspect seems largely irrelevant, partly due to problems with the gameplay but also because you simply won't notice any substantial gain in your characters' abilities.

The graphics in Barbarian are surprisingly good. Though the character designs are uninspired--just the usual assortment of barbarians and magic users--all the characters look detailed and animate decently during a fight. Most of the environments in the game are equally appealing. You'll fight in places like the sands of Egypt next to a fallen statue of a pharaoh or in a crumbling castle next to the sea where waves break on the rocks nearby. You'll even fight in the cold north, where a Viking ship is frozen within a massive glacier. The frame rate remains solid on most of the levels, though in some of the levels with large amounts of water, you'll notice some hiccups.

While the basic sound effects in Barbarian are done well, every other aspect of the sound is incredibly subdued. You'll hear grunts from the fighters, as well as the clashing of weapons, but that's about it. The soundtrack seems to serve as ambience rather than to stir you into action.

Overall, there really isn't much to Barbarian. The gameplay mechanics are pretty basic and repetitive, and the storylines are so bland that there's not much value in finishing the game with every character. The versus mode doesn't do much to help matters either, other than to test one of your powered-up characters from the quest mode against a friend's. Even the four-player action is dull. So unless you're desperate for some barbarian action, or unless you wish to increase your chances of getting carpal tunnel syndrome from mashing the same buttons repeatedly, you should probably pass on Barbarian. 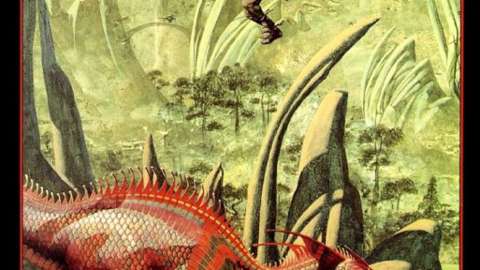 Players will be able to chose from one of ten barbarians in this game.