The challenging breadth of the adventure, the richly detailed graphics, varied gameplay, killer sound, and multiplayer mode all fuse into one amazingly fun experience.

Those who bought Banjo-Kazooie for their kids a couple of years ago found out quickly that Rare's 3D platformers are not child's play. Those who stuck with B-K all the way to Grunty's game show and the unveiling of the Jinjonator at the end of B-K are few and far between. But those who did are going to get off on this sequel big-time. Banjo-Tooie takes the few things that were troublesome in Banjo-Kazooie and makes amends while pushing everything that was great about the original to new heights.

Banjo-Tooie picks up right where Banjo-Kazooie left off. Gruntilda is still stuck under the boulder you planted on her, but her sisters soon show up and free the hag. In retribution, Grunty dusts Banjo's buddy Bottles with a devastating spell. Predictably, Banjo and Kazooie set off to restore the life of their pal Bottles and bring down the wretched Gruntilda once again. Let's face it. Anyone who is into playing 3D platformers isn't playing them to experience a tear-jerking plot. Banjo-Tooie's plot is absolutely absurd. This is the Banjo-Tooie panache. Never taking itself too seriously, the Banjo series is a parody of the very genre it attempts to perfect.

Tooie begins with the ability to perform every last jump and butt stomp from Banjo-Kazooie. Another 40 moves wait to be taught to you by the militant Jamjars who hides in precarious places throughout each level. The most glaring change from Banjo-Kazooie is that the red-breasted breegull can jump out of Banjo's backpack and adventure on her own. Banjo can venture out on his own as well, and while solo, they learn new moves, and multiple puzzles in Banjo-Tooie cleverly exploit this ability. The skull-headed shaman Mumbo Jumbo has quit the transformation business and left it for a girl named Wumba Jumba. Mumbo instead takes a starring role as a playable character with the majority of his duties revolving around standing on special pads and casting spells. Wumba transforms Banjo and Kazooie into forms Mumbo only dreamed of. The duo is transformed into a funky panel van, a heavily armed submarine, a clothes washer, and a massive T-rex, to name a few. Each transformation allows access to areas that were previously inaccessible, and in conjunction with the adult innuendoes and sharp writing, each helps to set a genuinely comical tone.

The pacing of Banjo-Tooie is dictated by the rate at which you acquire new moves from Jamjars. The first eight jiggies in each world can usually be reached with moves learned in previous areas, but for the last two it's time to head to the next level. While it would cut down a bit on play time, allowing access to all the moves from the beginning and providing a move list seems like an obvious fix for a major complaint among game players. Banjo-Tooie also includes a multiplayer mode where each of the game's 14 minigames are playable one at a time or in customizable competitions. New minigames and options are opened when you advance and when you discover secret objects in the single-player mode. The multiplayer mode provides a nice diversion, but its staying power is suspect.

The great thing about 3D platformers is that they are so free flowing in nature that the gameplay variety has no limits. It's possible to include first-person shooting, racing, minigames, you name it. Banjo-Tooie has all these and much more. The platform-jumping elements do not present much of a hurdle, but the demanding puzzle elements more than make up for it. Some of the puzzles are straightforward "flip a switch and open a door" deals, while others are just evil. Banjo-Tooie is difficult enough without obscure puzzles to solve and few clues to go by. The majority of the level design is top-notch, and some of the task progressions take things even higher. It's that feeling of "I have to get just one more jiggy" that keeps the controller glued to your hand and your eyes in a fixed gaze. Then that jiggy leads to four. The next thing you know, it's almost 4am and you've rubbed your eyes raw. Banjo-Tooie is that kind of game.

Banjo-Tooie hasn't completely discarded the collecting scheme. There are plenty of items that must be found or won and taken to other levels for use. Thankfully there are five time-saving warp pads in each level that facilitate zapping to different areas. This, in conjunction with warp portals that instantly shoot you to the entrance of each level, helps cut down the leg time considerably. Even so, there are plenty of times when the game could use some action. Most enemies go down with one shot and are placed merely for the sake of annoyance.

There isn't a single game on the Nintendo 64 that looks better or is more detailed than Banjo-Tooie. The lushly textured worlds are gargantuan, and if it weren't for the warp pads it would be easy to get lost. The game engine's drawing distance is just staggering. It's possible to soar up to the heavens and look down upon the entire world being displayed at once. Where Donkey Kong 64 constantly bombarded you with real-time lighting and atmospherics, Banjo-Tooie takes a more subtle, classy approach. A real-time shadow follows Banjo and Kazooie around at all times, and while walking past torches in caves it will realistically stretch along the wall. If there are multiple light sources, there will be multiple shadows. Wisps of fog swirl around in real-time lighting, creating rays, and the particle effects are the best yet seen on the console. As if this weren't enough already, the number of different animation routines stuffed into the cartridge is difficult to comprehend. Making it even more impressive, all this comes without the help of the Expansion Pak.

The visual splendor comes at the expense of the frame rate, which fluctuates wildly at the strangest times. Fortunately, the action level is normally so low that it does not significantly distract from the experience. The camera is one aspect of Banjo-Tooie that hasn't been improved. It still has a tendency to get stuck on objects, obscuring your view.

Rare has the Nintendo 64 sound hardware licked, and the development house struts its stuff in Banjo-Tooie. The MIDI compositions use the N64 the way it was intended, as sounds solo in and out to provide location-specific cues without ever breaking the flow. The sound effects are the final piece of the immersion puzzle - there are dozens of different sounds for footsteps alone. The characters still speak in looped gibberish, but considering the enormous amount of text in the game, this is certainly forgivable. The Dolby surround sound uses all five points well to emit some quality 3D sound with deep bass and clear highs.

Like the original game, Banjo-Tooie is one of those games that invades your subconscious and beckons you to return and play. The challenging breadth of the adventure, the richly detailed graphics, varied gameplay, killer sound, and multiplayer mode all fuse into one amazingly fun experience. Those who were put off by the fanatical banana collecting of Donkey Kong 64 will get some relief with Banjo-Tooie, and completists will be salivating to start collecting jiggies. Banjo-Tooie pulls out all the stops on its way to becoming one of the greatest 3D platformers ever. 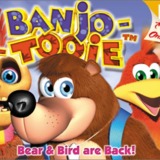 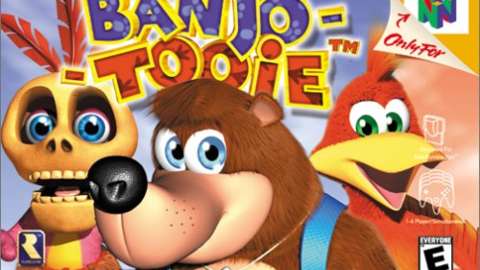 The challenging breadth of the adventure, the richly detailed graphics, varied gameplay, killer sound, and multiplayer mode all fuse into one amazingly fun experience.