Red Storm hasn't done anything wrong with Bang! Gunship Elite, but the elimination of the multiplayer features found in the PC version of the game limits its appeal.

In a galaxy far outside of our own, there exists an alliance between three races: the Arikhans, the Dagons, and the Numidians. For years, the three groups have worked together to explore the vastness of space, using a rare mineral called Kha as their energy source. Unfortunately, a fourth species, the Sektar, has recently declared war on the alliance. Mighty and powerful, they want the Kha for themselves. Forced into service prematurely, you'll assume the role of an Arikhan fighter pilot through 19 perilous missions in Red Storm's 3D space shooter, Bang! Gunship Elite.

If you've ever played the Colony Wars, Wing Commander, or Starlancer series of games, you're already familiar with Bang! Gunship Elite. You begin the game in the Panthaal system, assigned to protect an errant science vessel. As the incoming Sektar ships break for attack, it's up to you to take the little buggers out. To accomplish your task, you have only a single Wolverine class fighter outfitted with a modest array of weapons: a plasma cannon and a shield generator. As the mission progresses, however, you'll obtain a handy flux beam, which is then yours to keep. This is Bang! Gunship Elite in a nutshell. As each of the game's 19 missions throws more and tougher enemies at you, your job is simply to eradicate them and acquire new weapons in the process. All told, there are ten different weapons to collect, ranging from the rather ho-hum hellfire cannon to the uproariously violent titan's hammer. The action is roughly on par with Psygnosis' Colony Wars series, complete with interwoven game-engine FMV snippets to keep the storyline progressing.

The real dilemma with Bang! Gunship Elite isn't in how it plays, but the level of variety therein. The controls are easy to pick up, the game is challenging, and enemy AI at least tries its best to sneak up behind you. However, the game's mission mode is also its only gameplay option. Unlike Colony Wars on the PlayStation, there are no alternative scenarios, no arena battles, and no multiplayer options of any kind. Bang! Gunship Elite even lacks the online capabilities present in Crave's Starlancer, a game three months its senior. As such, what you see is what you get: 19 missions.

If you don't mind the lack of depth, however, Bang! Gunship Elite will send your senses for a loop. In-game graphics really push the envelope in terms of speed and detail. Asteroids, space stations, and other sorts of galactic clutter constantly float by, with voluptuous weapon discharges and debris-filled explosions invading the vastness at every turn. Ship designs aren't complex, but their simplicity is offset with healthy doses of thruster burns, smoke effects, gun turrets, and bizarre alien graffiti. If anything, the game is a bit too dark in spots, but ambient weapons fire helps illuminate the blackness of space quite nicely. The soundtrack is about what you'd expect from this type of game. Bold orchestral music, a brassy onboard computer, and booming weapon sounds comprise the sum of the game's auditory repertoire, while a stereotypically European male voice actor lends his talents to the game's premission video sequences.

Red Storm hasn't done anything wrong with Bang! Gunship Elite, but the elimination of the multiplayer features found in the PC version of the game limits its appeal. As such, it's an excellent game if you're into single-player sci-fi shooters. 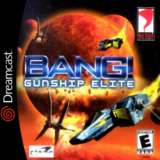