It has been quite a while since I've had a good excuse to pull out the old Ibanez sitting in my closet collecting dust, but BandFuse: Rock Legends' mix of rhythm game rocking and guitar training provided an excellent incentive. It blurs the line between musical rehearsal and plain-old fun, giving everyone from total guitar novices to more seasoned players the tools to rock out while improving their chops. While it might lack some of the more useful extras and visual pizzazz of the recent Rocksmith games, BandFuse is fun to pick up and play and delivers a straightforward guitar tablature-focused experience.

Getting the visuals and audio to sync up properly on HDTVs is one of the biggest nuisances plaguing the rhythm game genre. Spending a half-hour fiddling with finicky hardware tends to kill the mood when you just want to dive in and play. BandFuse takes a smart detour around all of that with the AudioLink adapter, a nice piece of kit that plugs into the back of your console and lets you stream the audio out to your TV or stereo through composite cables. It's lag-free, works perfectly, and sounds phenomenal. I also appreciate that the adapter includes a separate headphone jack to let you rock at high volume without blasting out your entire household.

Once you plug in and tune up--a thankfully intuitive and speedy process--you can dive into any selection in BandFuse's entire 55-track arsenal with a quick play session or explore them all in a more traditional campaign mode. The latter does away with any elaborate story trappings or goofy character gimmicks. You simply rock your way through a series of increasingly tough tours with names like Venomous Licks and Behemoths of Rock, earning money with each performance to go toward unlocking subsequent stages. Each tour offers a mix of multi-song gigs and one-off challenges to plow through, and the natural progression weaves in harder songs at a gradual pace.

Track-wise, BandFuse's eclectic mix of jams skews toward the rock, punk, and metal end of the spectrum. Face-melters like Children of Bodom's "Are You Dead Yet" and Testament's "Souls of Black" top a pleasantly finger-punishing stretch of the list, though plenty of catchy hits spanning the past four and a half decades make it in there too. Some tunes are recycled more than once as you go along, but rather than irritate, this structure encourages you to crank up the difficulty a little bit higher to push your skills as you progress and encounter tunes you've already played.

BandFuse's biggest strength is the way it balances its gameplay elements with more serious guitar practice. There's a welcome focus on realism, but the fun of playing a game and boosting your score isn't lost in the mix. While it's not the most attractive setup, the no-nonsense interface makes it easy to gauge what's happening onscreen and what you're being asked to play. Instead of flying at you down a vertical runway, Guitar Hero-style, notes are charted out on a side-scrolling horizontal fret board that mirrors standard guitar tab. Anyone who has thumbed through a guitar magazine or hopped on the Internet to look up the chords to their favorite radio hit will feel right at home.

A forgiving scoring system leaves lots of room to improvise and fiddle around between the notes and chords you're meant to play. You're not penalized unless you miss the notes altogether, and even then it's impossible to fail a song completely. This flexibility is awesome for experimenting on the lower difficulty tiers, where newcomers really benefit from the freedom to ease into more complex playing styles. It's a freedom that evaporates entirely on the highest difficulty setting when you have to play songs note for note as the fret board fills with dizzying chaos meant for pro-level players.

Despite five different challenge levels to suit a broad range of playing abilities--from the total newbie to the hair-twirling shredmaster--it's hard to find the sweet spot as you outgrow your current skill range and try tunes on a higher setting. Shifting up and down across different skill levels is an uneven, jarring experience to say the least. If you have moderate guitar-playing abilities, the easiest settings get boring in a hurry, but stepping it up a notch throws a whole lot more at you all at once. It's easy to get overwhelmed and flustered. This isn't a total drag, however, because it spurs you to actually practice and improve your playing.

To that aim, BandFuse's learner-focused ShredU section packs lots of tutorial videos and inspirational vignettes from guitar pros like Slash, Mike Ness, Zakk Wylde, and more. While only a handful are interactive, they're very informative, assuming you're in the mood to sit and watch hours of footage rather than actually play. The Lick Lab and Practice menus are more useful if you're in a hands-on mood, because they let you tweak the speed of any song in the game to practice at a slower pace and even loop specific parts until you've mastered them. These diversions are helpful if you're looking to learn, even if they're not as entertaining as the musical minigame found in the competition.

Whether you plug in a guitar or a bass, the instrument sound quality is top-notch, and both offer a different challenge with a wide assortment of tracks that will keep even the most skilled musicians on their toes. A trio of virtual FX pedals include adjustable levels of autowah, overdrive, and digital delay to tinker with. Between those and a handful of amplifiers, there's enough to fine-tune your sound even if the limited selection doesn't come close to satiating the needs of more dedicated pedal enthusiasts. You can also plug in a USB microphone to sing along, though both this and local multiplayer require extra adapters and hardware.

BandFuse's biggest strength is the way it balances its gameplay elements with more serious guitar practice.

BandFuse's user-friendly approach to guitar mastery strikes some chords that Rocksmith misses. The tab-based gameplay is accessible and easy to grasp, which makes shredding through this heavy-hitting batch of tunes an entertaining and educational romp for players of all skill levels. A limited scope of extra bells and whistles, along with sharp difficulty spikes between tiers, is an occasional turnoff, but the rush that comes from improving your playing over time until you can nail these songs note for note smoothes out some of the rough edges. 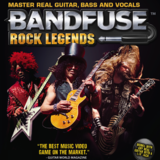 Playing in an assortment of oddball rock, punk, and metal bands since his early teens, Nathan Meunier is down with the face-melting goodness. Drums might be his instrument of choice, but he's no slouch on the six-string or low end either. For this review, he plowed through the extensive tracklist on all manner of difficulty settings, truly pushing his guitar and bass-playing skills to the limit...and then some.