The best pinball games have hidden levels, animated beasties, and plenty of surprises. Balls of Steel has all the above.

The Bally table king of PC pinball sims is Empire's Pro-Pinball: Timeshock! With its realistic look, visceral feel, and dynamic lighting, plus the customizability of its one deeply entertaining table, it's without peer. But Balls of Steel gives Timeshock! a run for its money, even bettering it in some aspects.

To be sure, this is a narrow PC gaming niche. But fanatics seeking the ultimate PC pinball experience abound, and an accessible and enjoyable game like BOS may draw in some new players. What gamers want is something equal to and ultimately greater than what electromechanical tables can provide. They're looking for true physics and a proper table presence: Can you make a "dead catch" with a flipper; does the ball look like it's rolling, rather than flying like a Frisbee; and do the rails, bumpers, and targets react realistically? In addition, does the PC sim bring in elements that only a PC game can include? There should be more to the game than simply racking up points by keeping the ball in play. The best games have hidden levels, animated beasties, and plenty of surprises. BOS has all the above.

Each of its five tables has a theme, from barbarians slaying dragons to space commandos on alien search-and-destroy missions. Those themes play out gradually and it may take hours before you see the entire retinue of a table's features. Hit the right target sequence and you can set off a horde of scurrying ants that, when rolled over, squish with a satisfying "splat." In other circumstances you may have to complete a series of events: Defuse a bomb threat by shooting your ball up the airport ramp several times to "load the buses," then send the ball up the freeway ramp to escape before detonation. This variety puts BOS a cut above Timeshock! in playability.

And like many modern-day electromechanical tables, BOS also offers a dot-matrix graphic display that presents minigames, like a variation of five-card Monte or a space alien shooting gallery.

You can display the table in one of two ways: full screen or scrolling. Unfortunately neither is completely satisfying. The scrolling mode's graphics are finely detailed, but you might as well be a deaf, dumb, and blind kid to play it. When the flippers are in view your targets typically are not. The 800x600 full-screen mode looks fine, but a lot of the graphic detail is lost in the compression. And both displays pale in comparison with Timeshock!'s multiple, isometric, full-screen views that display at up to 1280x1024 in 24-bit color. In addition, BOS doesn't come close to the superb lighting effects used in Timeshock!'s illuminated bumpers and elsewhere on its table.

Other drawbacks include a plunger that generally has no variable pull-back distance. In some instances the opening roll is too strong, and the ball always misses a target that would come into play if you could make a small adjustment. The sound effects and music are both OK, but nothing spectacular. You can "nudge" the table from the left, right, and center, and that may affect the ball's movement, but there's virtually no visual or aural feedback. The table image remains rock steady. And while you can vary gameplay from novice (the ball saver is active for several minutes) and standard five-ball play to three-ball arcade games, there's no other table customizability. Like Timeshock! you can record your high scores on a web site (Worldscores.com) for all to see.

If you're looking for the ultimate in PC pinball sim realism, BOS won't satisfy you. Rather, where BOS succeeds is in its fun factor. As you'd expect from a game that includes a Duke Nukem table ("I have balls of steel"), there's fun to be had here. Couple that with online bragging rights (some gamers have managed to keep a game going for ten hours, rolling up scores in the billions) and you have a game worthy of the Pinball Wizard moniker. 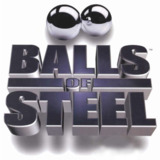 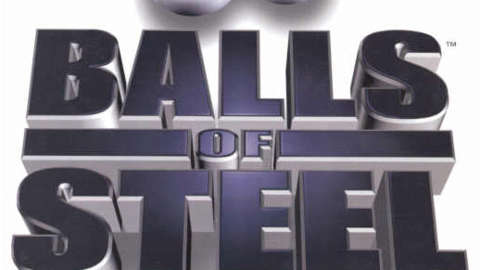 The best pinball games have hidden levels, animated beasties, and plenty of surprises. Balls of Steel has all the above.