A forgettable comedy is actually a good table tennis game on the DS.

Whether or not you enjoyed the recent motion picture, the video game rendition of Balls of Fury for the Nintendo DS is actually quite agreeable. The movie's goofy characters and lame story are merely window dressing for a table tennis game that's easy to pick up and quite a bit of fun.

Spanning the system's two screens is a vibrant, though plain representation of a ping pong table. Your opponents and their half of the table are shown on the upper screen, while your paddle and your half of the table occupy the lower touch screen. To play the game, you simply use the stylus to move the paddle around and, in turn, serve and return the ball toward your opponent.

The onscreen paddle has no trouble keeping up with fine movements or fast sweeps, so it's easy to line up returns and get lengthy volleys going. Overall, the controls work like you'd expect them to. Hitting the ball at an upward angle will result in a straight shot, whereas hitting the ball at a sideways angle will cause it to veer to the left or right. You can also hold left or right on the directional pad to put more English on the ball, which comes in handy when you're trying to slap an ace off the corner of the opponent's side.

Every time you return the ball or score a point, you add power to your character's power move gauge. Power moves are trick shots that are tough to return, because they tend to explode with speed or spin in circles. Each of the 10 characters has his or her own unique power move. To use a power move, all you have to do is tap up on the control pad. A full gauge lets you store three power moves, and the gauge itself builds rather quickly, which means trick shots are a frequent occurrence in every match. People who prefer traditional table tennis rules may find them out of place, but they definitely add a much-needed jolt of energy to an otherwise straightforward depiction of ping pong.

On the normal and hard difficulty settings, the CPU opponents put up a decent challenge. You'll find yourself in the middle of frequent volleys and firing off power shots at every opportunity. Playing on the easy setting isn't recommended. It's fine for picking up the controls, but the opponents tend to stop and let you take the point after three or four returns.

The presentation won't impress you, but it gets the job done. There are six different tables and 10 different characters to pick from. The tables are sufficiently detailed and the characters move with enough grace, but there's really not much going on apart from your paddle, your opponent, and the ball flying back and forth. The audio consists of a couple of "thwack" noises and a few vocal comments, as well as a half-dozen Asian-flavored music tracks that are utterly forgettable despite the goofy beats. At the very least, it's awesome how closely the characters and their portraits resemble the Hollywood actors who portrayed them in the film. Playing ping pong as Christopher Walken or James "David Lo Pan" Hong is truly a guilty pleasure. Thankfully, the story is told through text boxes, which means you won't have to suffer through the movie's dead jokes or insufferable dialogue.

How much time you spend playing the different single-player modes really depends on how much you enjoy playing ping pong against a computer-controlled opponent. If you strive to unlock all of the bonus characters and obtain all of the trophy awards, you can expect to invest roughly five hours batting the ball back and forth in the story, arcade, and exhibition modes. Beyond that, there's a multiplayer mode that lets you compete against friends, provided they have their own copy of the game. If you have friends who you know would enjoy a ping pong video game, convincing them to buy a copy of Balls of Fury shouldn't be too difficult. The cartridge can track four individual player profiles, which means you can feel free to loan it out and let your friends see for themselves.

As long as you don't need to be blown away by the graphics, you'll probably enjoy Balls of Fury. The Nintendo DS's dual-screen layout and touch-based control method provide an accessible, intuitive depiction of the sport of table tennis, and the game itself is genuinely fun. 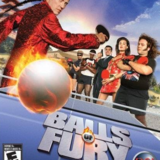