The 23-minute psychedelic vortex scene near the conclusion of Stanley Kubrick's mysterious 1968 film 2001: A Space Odyssey proved to many flower-power-era hippies that they needn't take drugs to experience quasi-hallucinogenic effects. For a modern update on that blasting-through-a-whirlpool-of-colored-lights experience, Xicat Interactive offers Ballistics, a hoverbike racer that lets its practitioners rocket through a series of humungous snaking tubes. Ballistics is all about speed, more speed, and the audiovisual effects that such tremendous velocity produces. It's an impressive sensory affair, though not overly compelling in the long run.

Unlike most racing games, Ballistics doesn't ask you to negotiate corners. In fact, analog joysticks and steering wheels are the least suitable control devices you could choose. Ballistics' bikes are, for the most part, magnetized to the interior walls of their slim futuristic courses and thus automatically follow the curved track whether they're right side up, upside down, or somewhere in between. The only time you will need to move to the left or right is to avoid one of the many obstacles or glide over one of the power-ups that Swedish-based developer Grin has placed en route. And since just a quick tap in either direction adjusts the angle of attack--much like the "strafe" or "sidestep" commands in a typical shooter--fast-action digital steering controls are infinitely preferable to incremental analog axes. In the end, most players will find that the venerable mouse-keyboard combination is the best equipment for the job.

Riding a Ballistics bike is an exercise best reserved for those who prefer bizarrely fast speeds and short, lightning-quick movements to careful maneuvering. Click the left mouse button to accelerate. Keep it firmly depressed to maintain a speed of 250mph or above or you'll soon be passed by each and every one of your opponents. Dodge the big red Xs, the partially open doors and gates, and the red cubes that are strategically positioned to slow you or stop you dead in your tracks. Search for the yellow-colored ramps, each of which allow you to use your "boost" button to temporarily supercharge your top speed to a near-insane and decidedly necessary 800mph or above. Head for the blue-colored ramps, each of which partially repairs the beating you've been taking from all those obstacles. The game designers have struck a good balance between positive and negative elements and that tremendous speed, thus forcing you to keep all your senses sharp throughout the duration of an event or face a premature end.

Yet Ballistics is clearly at its best when you do come upon an open and uncluttered section of track. Here, you're able to use your acceleration and boost buttons to their maximum potential and, in doing so, experience the proliferation of motion-related sensations that Grin has devised. At first, objects zip by above, below, and all around you at a frightening but still perceptible rate. Then, just prior to hitting Mach 1, the scenery appears to blend together in a mishmash of power-ups, obstacles, and sounds. When you actually break the sound barrier, the resulting sonic boom signals a period of true weirdness--a time when all sound effects, except for the rush of the wind, dissipate and the screen produces a psychedelic display of cosmic lighting and motion-blur wizardry. For a moment, you appear to move backward like the white lettering on spinning automobile tires. Then the rush of scenery begins again. If ever an epilepsy warning was warranted in a game, it is here.

Sadly, Ballistics loses much of its fascination within the first few hours of playtime. For instance, consider the static nature of each of its seven circuits. Certainly most of them are lengthy enough, and have single lap times in the one- to two-minute range. Yet the obstacles, which hold far more challenge than the none-too-threatening artificially intelligent opponents, are always placed in precisely the same location. It won't take more than four or five practice sessions at a given circuit to determine exactly where each of the undesirable roadblocks--and desirable power-ups--are positioned.

Furthermore, Ballistics' gameplay is simply so fast and so confined that you have very little opportunity to really experience the thrill of virtual racing. Most often, the scenery, opponents, and hazards move by at such a high speed that the bare-bones rendering of individual objects and bikes becomes indistinguishable. The game offers several first- and third-person view perspectives, but none alleviate the general lack of clarity. Nor does Ballistics have animated riders, noticeable vehicular damage, or replays. At least the postrace "shop" adds intrigue by letting you purchase high-performance parts with your winnings, and the multiplayer component permits a maximum of eight humans to race together if they're first willing to take the time to find one another. 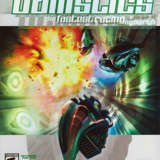 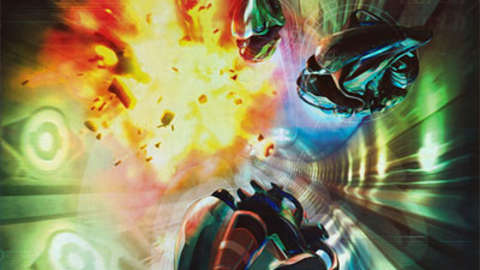