Despite the simplistic nature of the game and sheer mediocrity of many of the game elements, Ballistic is still a fairly fun puzzle game with a refreshingly new premise.

The puzzle game is truly a unique genre. To make a good puzzle game you don't necessarily need all the elements other games need. A good puzzle game may not require amazing graphics or sound, as long as the basic idea that drives the puzzle is a good one. Ballistic is a perfect example of this truth, with an original and interesting puzzle mechanic resting behind overly simple graphics and music.

It's easy to tell that Ballistic was probably inspired by Bust-A-Move, as the gameplay revolves around you shooting variously colored balls at other balls of the same color to eliminate them from the puzzle. Where the game differs is in the actual presentation. Instead of just being in a standard puzzle-gaming pit, your cannon sits at the center of a spiral, with a series of balls slowly moving toward you. Once the balls reach the center of the spiral, they blow up your turret, and your game is over. As in most puzzle games, the key to preventing your doom is to start long chains and therefore eliminate large numbers of balls at once. You'll also get the help of various power-ups, such as the bomb piece (which eliminates one color of balls completely) and the snail piece (which slows down the rate that the string moves toward the center). But there are also things to deter you, such as covered parts of the spiral that inhibit shots, as well as tornadoes that deflect balls.

There are two modes you can choose from - the stage mode and the panic mode. Panic mode puts you up against an unlimited string of balls with a meter that increases the level of difficulty as you progress. The stage mode puts you up against a limited string in different stages. Some stages have power-ups, some have variously shaped spirals, and some even have two different spirals, each with a separate string. If you'd like some competitive challenge, you can play in the two-player mode or even in the link mode. The two-player is a simplified version of the panic mode - the game ends when one player loses.

To call the graphics simple would be an understatement. There aren't a lot of objects in this game, and about the only thing that changes are the colors of the balls and the backgrounds. Aside from that, get used to seeing the turret, the spiral, and a whole lot of colored spheres. The various items you'll encounter are all in the form of self-explanatory icons. The clock briefly halts the spiral, and the treasure chests contain power-ups. The sound is pretty bad. The effects are really simple - a slight shooting noise when you shoot a ball and a breaking noise when you eliminate a series. One of the cooler effects is a sound similar to a rotary phone whirring when you make two separate parts of the spiral backtrack into each other. The music is all the same - cheesy elevator tunes that get crazy and hectic when the spiral gets close to the center. Unfortunately, once you reach the spot where the string is on the edge of being too close to the center of the spiral, the soundtrack will switch back and forth between the normal music and the excited music as you eliminate sets. This gets extremely annoying and makes the temptation to turn off the music very great.

Playing the game is about as simple as it gets. Move the controller up and down to aim the cannon then hit any of the four buttons to shoot a ball. The cannon has a cool dotted line to help you align your aim, as a miss will plant another ball in your string. Such simplistic control really lends itself to the gameplay, making it a game anyone can pick up and start playing. However, the game's interface is also extremely simplistic, making it almost tedious. After you end any of the modes you'll have to go back to the press-start screen and then proceed back to the mode you want. An interfacethat was more user-friendly could have helped this game a whole lot.

Despite the simplistic nature of the game and sheer mediocrity of many of the game elements, Ballistic is still a fairly fun puzzle game with a refreshingly new premise. While the gameplay may get a little boring at times, it's still fairly solid, and it lends itself well to people who aren't necessarily fans of the puzzle genre. 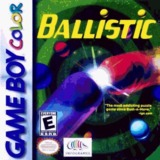 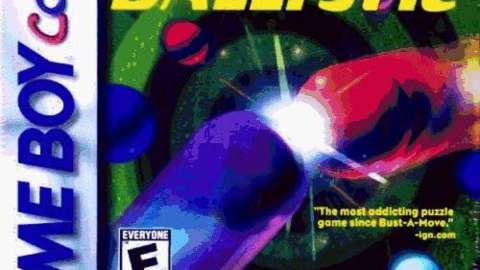 Despite the simplistic nature of the game and sheer mediocrity of many of the game elements, Ballistic is still a fairly fun puzzle game with a refreshingly new premise.