Ballblazer Champions has everything that a remake could want.

Ahhhhh… Sweet Ballblazer, how I've missed you. Now that you've returned to me I will be able to conquer the world… Er, sorry. It's hard not to be excited by LucasArts' triumphant remake of the Commodore 64 classic Ballblazer. Filled with everything that made the original great, along with better graphics, sound, and control than the Commodore ever could have delivered (yes, I know it's sacrilege, but it's true…), Ballblazer Champions has everything that a remake could want.

For those of you new to the video game world, or for those whose parents forced the gaming impaired Apple II unit on them (and yes, I know the game was available for the Apple, but let's face it folks, an internal speaker the size of a Wacky Wafer and a monochrome monitor do not a game system make), let me bring you up to speed. Ballblazer Champions is a high-speed, futuristic sports title that looks a little like a cross between Speedball 2 and Cybersled. The rules are simple. You pick out one of eight basic rotofoils, jump into one of over a dozen arenas, and attempt to put a glowing ball into a goal. Simple eh? The tricky bit is that you have an opponent who's trying to do the same thing, and you're both armed to the teeth with an assortment of futuristic gizmos designed to crush, fry, or confuse. If you don't master the controls quickly you'll find yourself shoved into a corner by a hailstorm of bullets and missiles as your opponent casually launches ball after ball into your goal. Fortunately the game looks fantastic, so while you wait for your competition to set a new high score, you'll have a lot to look at.

From first glance it's obvious that LucasArts has devoted some serious time to making a conversion title that takes full advantage of the PlayStation high-speed graphics engine. Although relatively simple, Ballblazer's graphics are pleasing to the eye and never seem to suffer from slowdown. Unfortunately, it's obvious that the company was forced to make a few decisions between graphics and game speed, so every now and then you'll find yourself confronted by some large, ugly pixels. It's not really all that big a deal, and it only happens occasionally. The game's sounds are much like its graphics: solid, but never really inspired.

In addition to being a great game on its own, Ballblazer also comes through with the all important head-to-head play – greatly adding to the game's long term play value. If you've been looking for a game that you can use to get a tourney started, or you're just into solid action games, Ballblazer is just what the doctor ordered. 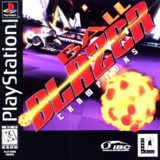 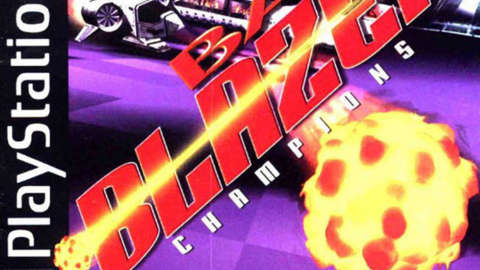 Ballblazer Champions has everything that a remake could want.