It's a definitive role-playing experience, and the only reason it can't be called the best game in its class is because in a sense there's nothing available that compares to it.

Initially, Baldur's Gate II looks very similar to its 1998 predecessor. The isometric perspective, the controls, and the interface bars along the edges of the screen will all be instantly recognizable to anyone who's played the original or either of Black Isle Studios' two most recent RPGs, Icewind Dale and Planescape: Torment. That's because Baldur's Gate II uses the same engine as in all those games and consequently plays in much the same way. Various similarities between Baldur's Gate II and previous games using the Infinity engine are readily apparent, and a lot of these similarities may be initially disappointing, as they may seem derivative of previous games, rather than reveal what's certainly the best of Black Isle Studios' AD&D-based role-playing games to date.

Baldur's Gate II picks up soon after the conclusion of the first game: A stylish cinematic sequence explains that your character is captured, jailed, and experimented upon, presumably because of his unusual lineage. Your character starts off at a relatively high experience level, based on his previous adventures. And you'll immediately need to put these honed combat skills to use: The first chapter in the game mostly consists of a dangerous prison-break sequence that's presumably meant to be an action-packed opening for the game. However, the sequence falls flat - you'll spend a lot of time trying to equip your character, and the battles even in this early part in the game can be quite difficult. You'll see several bizarre events in the prison that won't make much sense, and you'll be glad the whole escape scene is over after a few hours of play. The game gets much better at that point, once you've escaped to the city of Athkatla, and from then on, throughout the dozens of subsequent hours you'll spend with the game, Baldur's Gate II remains highly enjoyable and very involving.

Some players felt that the original Baldur's Gate was too drawn out - you had to thoroughly explore each area and keep track of all the characters you met as well as the tasks you needed to accomplish. Since then, role-playing games using the Infinity engine have been refined so that they're more cohesive, and Baldur's Gate II represents the ultimate stage of this refinement. It's an enormous game that lets you do a lot of different things, yet it's surprisingly easy to keep track of your main objectives. This is possible partly because of a well-implemented map feature. You'll refer to the automap often, because its miniaturized depiction of each of the game's hundreds of big areas clearly notes the various landmarks you've encountered, such as important structures, exit paths, and more. Some areas are fully mapped for you as soon as you get there - namely, the city of Athkatla. You can conveniently check your map to find locations you'd be interested in visiting such as taverns, guilds, shops, and temples. This is very fortunate, because Athkatla is huge.

However, one of the things that makes Baldur's Gate II so great is that in spite of the fact that you're free to travel throughout the entire city, many of your objectives will quickly become apparent. You need to find your captor and discover the nature of his experiments. Accomplishing this is anything but simple, yet Baldur's Gate II does a great job of keeping you from getting too lost or bewildered in your search, partly through the map, but mostly because of the well-designed quests. There are seemingly countless quests in Baldur's Gate II, and amazingly, most of them are very substantial. You'll almost never encounter a situation so simple as having to retrieve lost property or clear out some small monster infestation somewhere - there's always more to it than that. Also, since your character has already earned himself some notoriety based on the events in Baldur's Gate, it's understandable that rather than having to pry information out of everyone you meet, oftentimes it's you who'll be approached and asked for help. And just as often, as you're working on solving a particular quest, you'll end up discovering more than you expected and will take on other quests as a result. All this makes the pacing in Baldur's Gate II very fluid.

Once you get to Athkatla, the subsequent chapters of the game mostly alternate from being open-ended to more linear. You'll travel through a huge variety of settings and encounter hundreds of different characters to speak with and monsters to fight. All this variety somehow manages to maintain the game's tight pacing throughout the long duration of Baldur's Gate II. It helps that the party members that travel with your main character are generally very well developed. Your party members will often interject a comment into conversations you have with other characters, and over the course of the game, they'll all take some time to speak with you and even with each other. Some of these characters are entertaining, while others offer a real sense of camaraderie over the course of the game as they do their best to support your decisions and to offer their advice whenever appropriate. All your party members have a lot of dialogue, and a good portion of it is actually audible speech, which is put to good use throughout the game in order to provide deeper characterizations for many of the more important individuals you'll meet. At any rate, since you won't be able to travel extensively with all the characters in Baldur's Gate II if you play it through once, you'll actually want to play it a second time if only to learn more about your companions.

Another reason you'll want to play Baldur's Gate II more than once is that the game poses several tough choices for you at various points; you'll need to go with your instincts and make decisions where the right solution isn't obvious. The game also features many dozens of optional quests, lots of hidden treasures and artifacts, and a very flexible character-generation system. Actually, unless you import your character from Baldur's Gate, chances are you'll spend a long time just deciding which sort of character to play in Baldur's Gate II. That's because in addition to each of the basic AD&D classes, Baldur's Gate II offers three variations of each class. Several of these are intriguing, such as the shapeshifter, a druid who can change to a werewolf; and the kensai, a master swordsman who forgoes wearing armor in his effort to achieve supremacy with his blade. Baldur's Gate II even features three of the new 3rd Edition Dungeons & Dragons character classes: the monk, the sorcerer, and the barbarian. Many of the Baldur's Gate II classes make for a very different play experience, and if you wish to try them all, you have the option to play the game's multiplayer mode, create up to six characters, and play through the whole game with your own party. The only disappointing aspect of character creation in Baldur's Gate II is the very limited selection of character portraits available to choose from, which is especially disappointing since the portraits all correspond with the various characters you'll meet in the game. You can also choose to select a portrait from the original Baldur's Gate, and, as in the first game, you have the option to import your own portraits and even your own sound effects for use with your character.

During the course of Baldur's Gate II, you'll find a huge variety of conventional and magical equipment for use with your characters. Weapon specialization in Baldur's Gate II is broken down into each individual type of weapon, including long-, short-, and two-handed swords, scimitars, maces, flails, spears, slings, crossbows, katanas, and many more. You can also gain proficiency in different types of combat, including sword-and-shield skill and two-weapon fighting. Thus, whereas any fighter character could be equipped with a mace in one hand and a longsword in the other, unless he specializes in two-weapon fighting and those particular classes of weapons, he'll be relatively slow and weak in battle. As such, choosing your equipment and your skills in Baldur's Gate II is an important strategic decision.

The magic-using classes are even more interesting, if even a bit overwhelming. Baldur's Gate II features literally hundreds of different spells, many of which are exceptionally deadly. Later in the game, when you're facing powerful magic-users and probably have strong magic of your own, you'll be firing off debilitating or deadly spells and powerful protection auras constantly. Although the game does tend to slow down when a lot of spells are being cast simultaneously, the Infinity engine actually does an elegant job of letting you manage all your magic. You can set hotkeys for spells you use often, and when your party rests, your healers will automatically use their remaining healing spells in order to expedite your recovery. Another very helpful feature in Baldur's Gate II is the difficulty slider, which can be adjusted to make battles even more challenging or to automatically give you maximum hit points when you level up and eliminate the chance of failure in trying to scribe mage spells.

Baldur's Gate II even has an optional tutorial sequence, a huge manual (much of which is devoted to describing all the spells), and a collapsible interface so that you can play the game full screen. The full-screen mode is actually highly versatile, as the interface pops back up whenever you pause the action, which you'll have to do often in order to issue commands in battle. The game runs well in either 640x480 or 800x600 resolution and has unofficial support for even higher resolutions than that, and it takes advantage of your 3D-accelerator card for slightly enhanced visual effects. The game's loading times can seem a bit long, and it may crash on a few occasions, but these problems aren't significant. Otherwise, the game's prerendered maps are highly detailed and generally look very good, while the characters and monsters are fluidly animated. In addition, the great voice acting is complemented by the game's memorable symphonic score. Yet it's somewhat unfortunate that the game recycles some of the special effects and miscellaneous sounds and graphics from the first Baldur's Gate, as Baldur's Gate II is a superior game in every other respect.

There's always more that can be said about Baldur's Gate II, because while it's a very long game, its fine points are what make it so great. Clearly, it was designed to be the ultimate AD&D role-playing experience - it features the most powerful monsters, the strongest artifacts, and the huge variety of characters, places, and situations that make Advanced Dungeons & Dragons so prevailing. The game has a great story, good dialogue, highly sophisticated combat, meaningful decision-making, memorable characters, and plenty of replay value. It's a definitive role-playing experience, and the only reason it can't be called the best game in its class is because in a sense there's nothing available that compares to it. 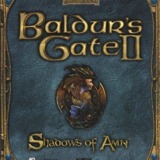