Awesomenauts is fun and frantic, and a great introduction to a typically unfriendly genre.

Multiplayer online battle arena, or MOBA, is a genre of games that are well known for their intimidating learning curve and dense knowledge-base requirements on the PC. They're about as friendly to novices as an algebra problem is to a first grader. That's not the case with Awesomenauts, a console-based 2D MOBA that serves as an excellent introduction to the genre for the uninitiated and is a fun spin on familiar tropes for MOBA veterans. It's also got a French chameleon with a robo-laser sword for an arm, which ranks pretty high on the awesome scale.

You play as one of six Awesomenauts on a mission to mine solar, a galactic fuel source and currency. Unfortunately, another group of Awesomenauts wants the solar too, and so you must fight to control the precious resource. The premise and plot are as absurd as a monkey with a jetpack, but Awesomenauts isn't about telling a story; it's about battle. You pick your hero, join two others (or AI-controlled bots), and slug it out against another team of three on one of a few symmetrical maps. Your goal isn't to kill other players, but to reach and destroy their solar core. While killing opposing heroes helps, this is not a game of 2D team deathmatch, and playing it as a straight team deathmatch game is a recipe for frustration. Success in Awesomenauts requires teamwork, strategy, and smart upgrade decisions.

You need your teammates to get to the solar core, which is housed behind layers of heavy-duty turrets. To aid you in your efforts, your solar base cranks out a never-ending stream of droids. They whittle away at the turrets, providing you cover to stand behind so you can blast them with your more powerful weapons. You battle back and forth, in a constant struggle to press forward into the opposing base.

It might sound like a plodding war of attrition, but the setting and crazy characters turn every match into a frenetic clash of strategies. It feels like you're always just one button--one quick decision--away from death or domination. The maps have multiple levels filled with jump pads, a couple of environmental hazards, and some local creatures you can kill for health. There's plenty of space to duke it out while your droids bop along on their paths of destruction. It's a dead-simple concept made more complex by the three player-controlled hero characters on each team.

There's a lot of room for customization in Awesomenauts, both as an individual and as a team. The heroes blur the lines between traditional battle roles, like tank, healer, ranged, and damage dealer, thanks to a diverse set of upgrade options. As you fight, you earn solar, which you can use to buy upgrades and abilities. There are more than a dozen upgrades per hero, some passive and others active. Seeing them all listed before you can be overwhelming early on--this isn't a simple loadout choice like in a team-based shooter.

The upgrade path you follow can have a huge impact on a match. For example, you could go full-tilt tank with Clunk the robot and upgrade his bite ability so that it steals health and lengthens his health bar with each successful bite. Or you could be a bit of a glass cannon and dump points into his missile launcher and self-destruct ability. The former build makes him last longer, while the latter does more damage but could lead to more deaths, which costs you precious solar. Awesomenauts gives you wiggle room to shape characters to your style of play. Like with a good fighting game, in time, your favorite character will feel uniquely yours.

Unfortunately, not all of the characters are available up front, which means you need to level up your account through matches with characters you might not like in the meantime. You can level up in offline practice modes (the only single-player option because there is no campaign mode), but playing against the not-so-smart AI doesn't come close to playing against real people with real strategies. Awesomenauts isn't as intimidating as its PC counterparts, but it's still a MOBA game, which means you need to invest in some tinker time to find the right build. There's a short tutorial in the beginning of the game, but it focuses more on the basic mechanics than it does on how to build a character and a team. It would have been nice to see some character-specific scenarios that offered tips on upgrade selections.

If you're willing to put in the time to explore characters on your own, or you've got a couple of friends who can help you along, you'll be richly rewarded. The more you know about the characters, the more you understand how to play as them and, more importantly, fight against them. When you start playing as a new hero, it may take you a few matches before you learn how to use them effectively. Yuri the jetpack monkey might look cool, but he's easy prey for a skilled Leon, the French lizard player. The good news is that the learning curve is scaled in a matter of hours, compared to the months of some PC MOBAs. That's thanks in part to the easy controls.

You have several abilities, each mapped to the face buttons, and you move around the 2D space with the left analog stick. A knowledgeable, synchronized team of Awesomenauts is a thing of beauty. There's a camaraderie that blossoms when you successfully use your character's strengths to cover a teammate's weaknesses. You're never an all-star in Awesomenauts, because lone wolves die fast; rather, you're always a team player, doing your part for the success of the group. The focus on an objective and the reliance on others make Awesomenauts feel more like a team sport than a typical frag fest. Once you get on a roll with a team, it's hard to stop. Every match is a new challenge: Will the next team have a better strategy than yours? Does someone have a different build of Lonestar the space cowboy that could best yours? Should you try out that new upgrade you unlocked? The addictive momentum of Awesomenauts is easy to get caught up in.

The 2D presentation is the most obvious departure from the usual MOBA setup, but it's the art style and underlying absurdity that steal the show. Awesomenauts has everything you'd want out of a wacky Saturday-morning cartoon: ridiculous eccentric characters, goofy voice acting, and an enthusiastic theme song, complete with an over-the-top animated intro. The characters are brimming with personality. They're all visually unique and easily identifiable, which is great since things can get hectic on the 2D battlefield. You won't mistake the floating brain creature Voltar for the hip-hop-inspired Froggy G (who might have the best theme music of any hero). The dedication to the Saturday-morning cartoon theme makes it feel like Awesomenauts is based on an actual show, and after spending a few hours with the colorful cast, you might wish it were.

There are a few issues that can make your play time decidedly less awesome. The net code isn't always reliable. We lost a few games and parties to connection issues, both in lobbies before a match and randomly in the middle of matches. If a player drops out, he or she is instantly replaced by a bot, which for a well-tuned team could spell disaster. Jumping back in to a game is a relatively quick and painless process, but in an intense battle, every second counts. The heroes aren't perfectly balanced either, and some combinations work much better than others. Those are issues that could be ironed out through patches, or additional downloadable heroes, which are already being advertised in the game.

If you've never played a MOBA, Awesomenauts is a great place to start. Grab some friends, take the time to study up on your favorite characters, and you'll have a blast. MOBA pros may enjoy the fresh perspective and the quirky characters too. There are a couple of hiccups that can spoil the fun, but they're not frequent enough to ruin the experience. For just $10 or 800 Microsoft points, Awesomenauts is a great value offering a deep and rewarding competitive battleground. 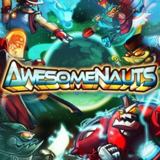