You may want to shuffle away from this dungeon crawler.

Away: Shuffle Dungeon is an intriguing collaborative project between Mistwalker and Artoon. It blends the creative talents of Hironobu Sakaguchi, the creator of Final Fantasy, and Naoto Oshima, famed Sonic character designer. It's a simplistic role-playing game that emphasizes fast-paced dungeon-crawling and a unique presentation, but the lack of any depth or challenge makes it hard to stay interested for long. The game offers little more than a simplistic dungeon romp with a mediocre story.

Webb Village, a cozy, seaside paradise, is experiencing a phenomenon called the Away, which is a mysterious force that occasionally whisks off villagers. The hero, Sword, is next in line for abduction when a local village girl takes his place, triggering the disappearance of the entire village. Sword immediately begins rescuing villagers from the monster-filled caves that have ripped open the land. Though the storyline is initially quite dull, there are a few twists that keep it appealing.

The game is so player-friendly that it's often too easy, offering brief tutorials that explain almost every aspect, from gaining experience to shopping. Village exploration is very straightforward and occurs on the bottom screen, where it's displayed in primitive yet adequate 3D. The top screen, meanwhile, houses a convenient map that marks a star whenever your current goal is on the field, so you'll spend little time wandering around aimlessly. Most of the objectives amount to nothing more than simple, monotonous fetch quests, but if you get stuck, there's always a fortune teller to point you in the right direction, making every quest ridiculously easy.

Very little differentiates Shuffle Dungeon from the usual dungeon crawler with the exception of its unique shuffle mechanic. Dungeon segments are displayed in 2D on both screens along with a timer; the designated screen rumbles as the clock counts down, eventually "shuffling" sideways to display a new segment. The goal is to flip switches that modify dungeon segments, clearing a path to the next staircase. This refreshing, fast-paced system is highly dynamic, applying constant pressure as you rush against the clock, making split-second decisions before a shuffle. Whenever you're caught in a shuffle, the switches reset and you restart that floor, but the penalty is hardly crippling given that most dungeons are limited to an easy three floors.

Unfortunately, the combat system is boringly simple, providing absolutely no depth at all. Basic combat consists of hacking and slashing your way through opponents via short, three-hit combos in between flipping switches, which is largely dissatisfying. To worsen matters, there are only four available weapon types, and their clumsy, slow combos make them highly impractical given a dungeon's push for speed, simultaneously lessening combat variety along with any opportunity for strategic thought.

Strategic play is further discouraged by a cumbersome magic system that relies on fupong, which are colorful blobs that enable you to cast spells. You're allowed six fupong at a time, and though initially, your fupong grant you only one spellcast each, you'll eventually be able to increase their magical strength by combining them. However, you can't combine fupong of different types to expand your spell variety, which is a huge disappointment. While the inclusion of fupong makes for an interesting magic system, you have zero strategic control over your spellcasting because you're unable to cycle among fupong, even during boss fights. This is highly frustrating because you're forced to cast spells exactly in the order that the fupong line up in behind Sword rather than the order you want. This means that you'll have to waste all the spells in front of a fupong you want that just so happens to be at the end of the line, leaving you without magic until you recharge the fupong by changing floors.

The highlight of any dungeon crawler is its boss battles, but only a handful of 3D boss fights are included, with most of those rehashing boss designs and tactics. You'll find it annoying that you're unable to maneuver the camera to look around because bosses occasionally sneak up from your blind spot and whack you in the back. Another irritant is that the game manages to make even boss fights tedious by requiring the same strategy for each one: hit the glowing red gem on the front. The only way to attack a boss is to position yourself directly in front of it; swiping it from the side by an inch causes you to miss.

Additionally, there are a few strange quirks. The foremost is that the gameplay is sometimes cheapened by enemies suddenly spawning on top of you or backing you against a wall, where you have difficulty moving to attack monsters head-on. This is due to narrow dungeon pathways and the controls, which become less responsive when you're surrounded by foes. Another quirk is the inclusion of a partially implemented, meaningless feng shui house minigame that encourages you to place your starting shops according to nature's chi flow. Ideally, this feature should impact the item availability and success of each store, but you'll find that feng shui rarely affects a store's inventory and is suddenly dropped for the rest of the shops.

The 2D dungeons are very detailed, with colorful sprites and spell effects. However, the game's real visual delight is its 3D village environments, where cute if crudely textured houses and flowers dot the landscape. Some may be put off by by the admittedly unique blocky character designs, which are so unattractive that they actually detracts from the presentation's somewhat charming aesthetic. The fully voiced cinematics are of a lower quality than the handheld is capable of, but their exaggerated voicing is far more annoying. Ambient noises are a treat, however, with appropriate sword slashes and casting effects accompanying attacks, and the mildy endearing music provides a nice backdrop for each dungeon.

It should take you 15 hours to complete the main quest, but there isn't much in the way of replay value. You can start a new game, maintaining your experience and items you have on you, or start up multicard multiplayer matches with a friend, battling bosses together, but it's a shame that a two-player dungeon mode isn't offered. 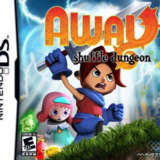