Audiosurf's addictive gameplay is a fun new way to experience your music collection.

You'd never know it by the millions of copies that Guitar Hero sells on an annual basis, but just a few years ago rhythm and music games such as Frequency, Amplitude, and Vib Ribbon were part of a fledgling genre that garnered plenty of critical attention but failed to sell very well. Audiosurf, which at the time of this review is available only as a downloadable title via Steam for $9.95, is a game that harks back to those days. You don't so much play the music stored on your computer as you experience it. The gameplay is simple but addictive. And while you'll have the most fun competing with friends for high scores, you can lose yourself in your music for extended periods and have a great time, too.

Audiosurf can best be described as a cross between the futuristic racer Wipeout and Harmonix's first music game, Frequency. Rather than play a simulated instrument, you use either the keyboard or mouse to move a futuristic craft left and right on a moving, floating track. Each track is unique because it's generated by analyzing the music that you've chosen for that particular track. You can pick any MP3, M4A, or WMA file (among a few other formats) that doesn't use digital rights management. Slow parts of songs go uphill and the track moves slowly, while faster song segments go downhill and the track moves extremely fast. There's no doubt that faster songs are the most exciting and the best for points, but part of the fun with Audiosurf is to see what kind of track a particular song will generate, so slow songs still have a place in the game.

The main objective of Audiosurf is to score lots and lots of points, which are earned by running into the different colored blocks that fill the different lanes of the track. As you collect a block, it falls into the 21-block, 3-by-7 board in front of your craft. If three or more of any color blocks that you've collected touch one another they're considered a cluster and disappear. The more blocks you have in a cluster, the more points that cluster is worth. You'll also earn more points for clusters that are made up of "hot" colors such as red and yellow, which are worth more than colors like blue and purple, but are also less plentiful.

The basics of Audiosurf are just that--basic. Once you've watched the included tutorial you'll have little difficulty getting all the way through songs and you might find yourself wondering where the challenge is. The challenge will become apparent to you the first time you see your position on the leaderboards for a popular song. If your score isn't at the bottom it's going to be near the bottom, and you're going to need to employ some strategy to move up the leaderboards. There are a number of ways to do this. For starters, there are 21 different characters that are divided into three classes. Each character/vehicle has its own unique abilities; some can jump blocks, others can grab a block and move it into a different lane. A few can shuffle blocks once you've collected them, and some can make an entire color vanish. There's even a driver that uses two cars, one of which is controlled via the keyboard while the other uses the mouse. Finding the character that best suits your play style is an integral part of improving your scores.

Another key method of earning better scores is using the various power-ups that are sprinkled among the blocks on the tracks. Storm power-ups throw several like-colored blocks onto your board; multiplier power-ups make your next cluster worth several times its normal value; and paint power-ups can turn all of the blocks in your board the same color, which results in huge clusters and higher scores. Another way to earn big points is to finish a song with an empty board. This is known as a clean finish and will net you a 25 percent bonus. At first, it may seem as though you'll never be able to move up the leaderboards; but mastering just a few simple techniques will yield much higher scores.

Audiosurf is a lot of fun, but it does have some problems and areas for improvement. We had a problem where the game didn't recognize that we'd purchased it and insisted it was a locked demo. This was quickly solved with a visit to the game's message board, but it's a well-known issue that should have been fixed by now. The game also generated blank tracks and froze on several occasions. There are a few design issues, too. Audiosurf analyzes your music to generate each track, but the blocks don't always follow the beat very well, so you'll sometimes feel as if you're playing a randomly generated track with a song you like in the background. Audiosurf is also a bit shallow. It's possible to lose yourself in the music for extended periods of time if you're keen on setting high scores, but if you're not a high-score maniac you might feel as if you've experienced everything the game has to offer after just a few hours, as there are no alternate modes of play. Nor is there any multiplayer outside of one character that lets a person control one ship with the keyboard while a second person guides the other ship with a mouse. Though you may eventually tire of the gameplay, there's never any shortage of tracks to play thanks to free weekly downloadable music courtesy of Audiosurf radio and, of course, your own ability to add music to your PC.

The visual presentation in Audiosurf is simple, with tracks appearing as little more than wire frames and sparsely populated backgrounds with minimal effects, but the uncomplicated visual design gets the job done. Graphic detail, resolution, and antialiasing can all be bumped up to slightly improve the graphics, but you'll need a pretty powerful machine to do so, or else the game's frame rate will chug and stutter.

Audiosurf is a very good game that gives you an all-new way to enjoy your music. Granted, Audiosurf does have some technical issues and the lack of alternate play modes is disappointing, but few other rhythm/music games can provide so much entertainment for such a low price. 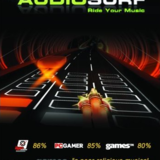