Fitting somewhere between the Tony Hawk-style extreme sports games and the supercross-style BMX racers, ATV Offroad Fury delivers a game that adheres to a more arcade style of gameplay, with a definite focus on fast, simplified gameplay mechanics and big, big air.

ATV Offroad Fury bears a remarkable resemblance to one of its developer's previous offerings, Motocross Madness. The similarities between the two are evident, with ATV using the same sort of stripped-down, fast-and-loose controls and physics as Motocross Madness. Offroad Fury's controls are simple, but they work. Aside from the standard analog directional control, gas, and brake, the game also has a "preloading" feature to help you catch bigger air. The feature is simple--pull back the left analog stick as you go up a hill, and slam it forward once you hit the top. Preloading may prove to be difficult to time, but it is wholly necessary. Most tracks have speed lines that take advantage of the preloading feature, and if it isn't used on specific jumps, you'll find yourself slowly skipping off the tops of burms while your opponents fly overhead. There is also a simple trick system, which can be executed using both the left analog stick and either the circle or triangle buttons. The trick system is shallow, and it's really only of use in the freestyle tracks, primarily serving as window dressing in the lap-based courses.

The best word to describe Offroad Fury's physics is floaty. The quads have a propensity for flying into the air and staying there for a while. Fortunately, this is coupled with fairly tight control, creating a nice balance that allows for big air without having mushy controls while on the ground. A side benefit of the physics are the gigantic crashes, which, in all their gruesome glory, can honestly be some of the most fun to be had with the game.

The control and physics systems, while simple, prove to be fairly versatile, as they work well with the four different modes, each of which has a wide variety of course locations. There is the MAXXIS Nationals, a string of groomed off-road courses that vary greatly in location, ranging from snowy mountain tops to desert dunes. The stadium supercross mode is exactly what it sounds like--large man-made stadium courses with lots of long, flat straightaways and big jumps. The enduro and freestyle modes both take place in true off-road environments, with no marked paths to speak of. The freestyle mode gives you a set amount of time to pull off big air tricks, with the score focus on points instead of lap time. Enduro works like the other standard lap-based modes, requiring you to sequentially pass through checkpoints scattered throughout the level. This mode provides the purest off-road experience, as it is still a race, but with no well-defined track, you're given free reign on your path to the next checkpoint.

The overall presentation of the game is solid, if not slightly scattered in the audio department. The engine and rider sound effects are all sharp and a good fit, but the soundtrack can't seem to find any sort of cohesive theme, with tracks from the old-time grunge rockers Alice in Chains and Soundgarden, cuts from big beat techno outfits Apollo Four Forty and CIRRUS, and skate punk/nu-metal cuts from Sevendust and Strung Out, among others. The graphics, on the other hand, fare much better, with big well-detailed levels and physically accurate quad and rider models and movement. The game clips along at a good rate in single-player, though it takes a big hit in frame rate and draw-in distance when playing two-player.

If there is one outstanding flaw in ATV Offroad Fury, it's the AI. The opponents are consistently on top of their game right from the get go, almost always catching speed lines, which raises the learning curve significantly and makes the memorization of speed lines downright necessary. The AI also seems to lack variety, as opponents have the tendency to herd up, creating large groups of quads on the track. The AI and graphical flaws bring ATV Offroad Fury down, but not by a lot. The game's arcade feel may discourage those looking for an off-road racing sim, but most everyone else will find it to be a fun pick up and play game. 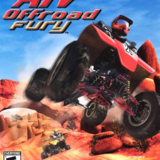 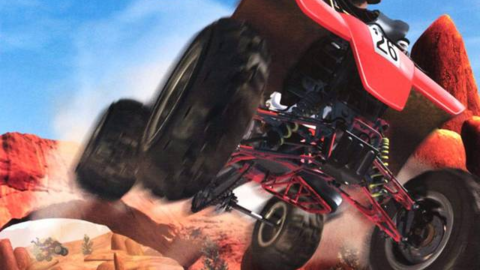