You'll be hard-pressed to find more bang for your buck than this packed PSP off-road racing game.

As is the case with other off-road racing games of late, you're not simply tied to MX bikes and ATVs in Offroad Fury Pro; you'll also be turning laps in dune buggies and sturdy Trophy Trucks. Each vehicle category features numerous models to choose from, and each model has unique handling thanks to differing horsepowers and cornering abilities. In addition, new vehicle classes are available--such as snowmobiles and rally cars--which are tied to the new events found in the game.

While the driving model in Offroad Fury Pro certainly isn't bad--the gravity-defying leaps and responsive controls remain just as fun as they were in the previous game--it isn't sophisticated enough to convey drastic differences between vehicles in the same class, such as a rally car and a truck or an ATV and a snowmobile. Only the MX bike, with its hyperresponsive cornering, feels remarkably different from practically any other vehicle in the game. Another quirk of the gameplay is the unbalanced nature of the trick point system. On either the MX or ATV bikes, earning points requires you to perform midair tricks using a variety of button combinations. Conversely, when driving a truck or buggy, you'll rack up points simply for hitting jumps or sliding through turns. As a result, you typically earn far more points in a heavy vehicle than you do on a light-class vehicle, which makes freestyle events (trick-based challenges only open to the MX and ATVs) more frustrating than they should be.

If you can get past the straightforward nature of the driving, you'll find a game that is absolutely loaded with different race types. Events include the standard supercross, rallycross, national, freestyle, and circuit events; as well as more unusual events such as the endurocross, rally, and snowcross races. In some cases, events can be run by more than one class. For example, to fully complete the nationals events in championship mode, you'll need to run it four times, once for each default vehicle type available in the game. Completing race events will earn you credits and unlock new race events in the game's championship mode. Using these earned credits, you can upgrade your vehicle with new parts for practically every aspect of your ride; brakes, clutches, engine internals, and exhausts, as well as a number of cosmetic additions such as new spotlights or wheels, are just a few examples. Just as differentiating the feel of the various vehicles is tough, you'll be hard-pressed to notice a massive difference between how your ATV handles on default settings compared to how it feels with every upgrade available installed. The most telling detail, then, is how easily you are keeping up with (or beating) your artificially intelligent opponents.

Your on-track foes are distinguished mainly by their refusal to give even an inch at any time on the track. While you really shouldn't have any trouble beating any race event in the game (provided you've kept up with your upgrades), you quickly learn to stay out of the way of your opponents, as you'll usually come out on the losing end of any collision. For example, should you get T-boned in a corner by a competitor, the opposing car will make zero effort to remove itself from you. Instead, it will be up to you to untangle yourself, usually losing valuable seconds in the process. The game's rubber-banding can be a pain, too; there will rarely be a moment in the game when you don't have an opponent barreling down your tailpipe, no matter how perfect a lap you drive.

Another wrinkle to the gameplay system is the various sponsors you can earn in the game. As you perform well in race events, you'll attract the attention of various sponsors as you go. If you choose to sign a sponsor to your team, you can earn items like prototype parts for your vehicle or cash bonuses for placing high in a race. Conversely, some sponsors will penalize you for not living up to your end of the bargain (that is, coming in last place), so you'll want to weigh your sponsorships carefully.

If the massive single-player championship mode isn't enough for you, there's always multiplayer racing to keep you occupied, both via infrastructure and ad hoc. So far, the game hasn't exactly enjoyed a glut of online participants to race against, but should you manage to find enough folks to compete with, you'll enjoy competition against live opponents with smooth, lag-free performance the entire time. The developers at Climax threw practically everything they could think of into Offroad Fury Pro's online play. Though you can only race against three other racers online, the game lets you create race, freestyle, and minigame events; run championships in any series found in the game; and even compete on tracks created in the game's easy-to-use track editor. With community features such as bulletin boards (for both PSP and PS2 players), buddy lists, and, eventually, downloads, the online component of Offroad Fury Pro is impressive. Here's hoping the population grows enough to take proper advantage of it.

There is little to complain about, or laud praise upon, in ATV Offroad Fury Pro's graphics. The vehicles are scaled-down versions of the same models used in the PS2 ATV Offroad Fury games, and the trick animations are identical, as well. For the most part, the environments themselves look fine, though you'll notice frequent draw-in of some roadside objects, as well as the occasional curious warping of some of the track textures. It isn't enough to screw you up while racing; it's just odd to see. The vehicles kick up a cloud of dust or mud behind them, but unlike in ATV Offroad Fury 4 for the PS2, your ride won't accumulate dirt as you go. Frame-rate problems are few and far between and never last long enough to be of major concern. The sound in the game is defined by the decent variety of engines found across all the different vehicle types found in the game. Some sounded a bit too "buzzy" for our tastes (such as the MX and ATVs), but the larger vehicles were appropriately beefy. Your enjoyment of the game's soundtrack will depend upon your tolerance of angry rock and up-tempo hip-hop tunes that compose the track list. Finally, despite a wealth of content in the game, the menu presentation does a good job of keeping everything organized.

Though ATV Offroad Fury Pro features a ton of content, the game feels largely the same as previous efforts. If you are new to the series, you'll enjoy much of what's available in Offroad Fury Pro. If you have played these games before, however, you'll likely feel as if you've already been down this road. Only this time, the trip is longer and there is more to do along the way. 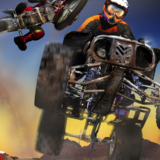