Forget about flight-sim physics and just enjoy this dumbed-down take on air combat over the Pacific in World War II.

Want to single-handedly win World War II ? Then sign up with Attack on Pearl Harbor, a physics-less shoot-'em-up where one Japanese Zero can sink the entire US Sixth Fleet. As you've probably guessed, this Legendo Entertainment game is about as true to history as Hot Shots and a long way from the usual hardcore PC flight sim geared to show you how punishing it was to get a P-40 Warhawk into the air, let alone use it to shoot down enemy aircraft. Even though the game's arcade slant may seem out of place on the PC, its engaging campaigns and fast-flowing action make for a nice, violent snack.

Consider this an arcade flight sim by the numbers. You fly a handful of fighter planes from a third-person perspective for either the Americans or the Japanese in the Pacific theater of WWII. There is a quickie dogfight option where you set up mission parameters and take to the skies against enemies either solo or in online multiplayer matches. There are also two separate campaigns where you fly for the Stars and Stripes or the Rising Sun.

Of these game types, only the campaigns really stand out, especially since nobody seems to be playing the online mode despite the game having been out in stores for a while. Missions are a bit formulaic, with just about everything from straight-out dogfighting or dropping bombs on enemy bases to sinking enemy shipping with torpedoes, though it's all so packed with nonstop shooting that it's tough to get bored. All of your assignments branch in the old Wing Commander style too, so failure means that you still move on rather than endlessly repeat missions until you get it right. Campaign missions also begin and end with colorful comic book panels that perfectly match up with the arcade gameplay, giving the game added flavor (even if the Japanese sequences are over the top when it comes to Asian stereotyping). Experience points earn you promotions as well, and shooting down enough enemy planes unlocks new planes in your own hangar.

Everything is arcade-friendly, which means you use the spacebar to take off and never have to worry about landing or stalling or any of the other foibles of flight-sim flying. You also have an unlimited supply of ammo, bombs, and torpedoes. You can't collide with other aircraft in midflight either, so you can wheel and turn with little regard for personal safety. This is actually a good thing because the enemy artificial intelligence is extremely aggressive when it comes to dogfighting. Once combat is joined, opposing fliers are on your tail until you either send them into the drink or they down you. This certainly increases the overall tension, although at times, it seems extremely unrealistic. Enemies lock on to you so unfailingly that it's as if you're taking automatic damage unless you're constantly turning. There isn't any concept of flying sensibly or stalking a foe. It's just nonstop scrambling and shooting, with the hope that you can get behind the bad guys long enough to blow them to pieces.

The visual engine keeps up with the pace, at least. The terrain is a bit odd-looking because of a focus effect that makes islands, ships, and buildings at a distance a bit blurry. However, the frame rate flies with all of the bells and whistles turned on, while the planes are quite attractive. The only drawback is a fairly limited number of aircraft types. You never get beyond a handful or so of planes representing each nation, and they all stick to the Zero/Warhawk style. Audio is what you'd expect, meaning lots of rat-a-tat machine-gun sounds and bomb-dropping whistles. There isn't any radio chatter though, which makes it seem like you're flying in a vacuum at times.

If you're looking for depth, look elsewhere. But if you're up for spending a few moments ripping around the Pacific single-handedly winning WWII, Attack on Pearl Harbor is a good bet. 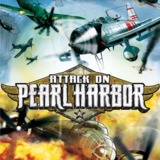