Attack Of The Earthlings Review: The Tables Have Turned

Predators vs. the Alien

The premise of Attack of the Earthlings is the flip of a well-worn trope: Instead of being faced with an impending alien invasion, humans are the intergalactic terror. And (even worse, depending on your own views) the invading terrans are hopelessly incompetent capitalists, who are out to make a quick buck. As the matriarch of a race of insect-like extraterrestrials, your only goal is to wipe out the humans and stop them from plundering your home to fill up their coffers.

Structurally, Attack of the Earthlings takes nods from the likes of XCOM and other turn-based tactical games. Instead of starting with a squad, though, you're generally alone. As you consume the bodies of your enemies (an essential part of hiding corpses, of course), you can spit out smaller, weaker creatures. Play revolves around your carapaced corps and guiding the spawnlings through each level. And, as a system for expanding play and tactical options, it works well. As you go, you'll unlock new abilities to torment the colonizers as well as more varied drone types that require careful coordination. In effect, this turns Attack of the Earthlings into a satisfying, single-player team-based stealth game.

Most maps revolve around a simple form of this dynamic. You--the misunderstood, scary alien hellbeast--are understandably terrifying to the weak, squishy humans, but they have guns that punch plenty of holes in your otherwise sturdy exoskeleton. You both kill (and can be killed) with little effort, meaning that you'll need to carefully measure your approach to battle.

The high lethality leads to a few exciting moments, but more often than not, those moments are defused by the tract of humor that runs throughout. After the first few missions, though, that's not much of a problem; once you regularly have drones to control, it becomes a lot clearer that Attack of the Earthlings is plenty content with letting you be an '80s horror flick villain. This goes double because, again, you are the hulking leader of your species. With your massive claws, the ability to eat whole people, and a legion of spawned followers, it quickly becomes clear that the Earthlings have no chance. You're here for the ride... and to see what kind of gory trail you can leave behind.

Where this really fits into that classic screamer vibe is how you'll need to make your approach. You can't fit into vents, nor is it easy for you to hide. Mission pacing varies, then, based on proximal goals. Inch the queen forward, kill a few dudes, create spawn, explore more of the area, and then bring your spawn slowly back to you as you complete objectives and unlock the exit. It can get a little monotonous, but the feeling of domination that you get from leading lots of little critters through the nooks and crannies of an interstellar planetary drill meshes perfectly with the tongue-in-cheek tone of the writing.

Attack of the Earthlings takes a different, absurd tack, dropping the severe consequences of mission failure and the emergent narrative for what is essentially a sketch comedy in space.

The connective tissue and guiding mission centers on a drill that the humans have brought to your stellar doorstep. Progress starts with infiltrating the drill and climbing upward, moving away from the blue-collar employees that maintain the drill bit and toward the posh execs at the top. Not too far-flung from the tongue-in-cheek brand of humor of Futurama or The IT Crowd, the most common thread in Attack of the Earthlings' writing is the silly, incompetent nature of your would-be invaders. They are threatening, yes--but not fundamentally so.

Your first victim, a lowly guard pausing for a pee break mid-patrol, sets the tone well. You are the horrific, unholy monster from the nightmares of these poor folks; at the same time, they are so hopeless and ignorant of the threat you pose that jumping a dude as he's taking a whiz (so that you can spawn more of your demonic children) doesn't ever come off as mean-spirited. They are hapless victims--stooges who get a little bit of humanity before they are playfully yanked offscreen, leaving a bloody mess behind.

Individually, the humans aren't concerning; they aren't even really a threat, unless they have weapons. Instead, the fear they instill comes from their ability to cooperate against you--clumsy and silly though they are. Countering that, much of the game has you pulling off simultaneous kills with one or more of your minions (and you) at the same time. This helps even the field--particularly down the line, when you can bring one of three specialized drones into combat.

Each specialization is an insectoid riff on the standard trinity of character classes: warrior, mage, and rogue. Goliaths are beefy brawlers, stalkers are sneaky trap-masters, and disruptors help to control foes--opening them up to attack or allowing you to slip by. The drones themselves aren't complex or novel, but playing their strengths off of each other and using their skills to complement your abilities is a joy, especially if you can conduct them in one massive assault. Unfortunately, there aren't enough of these orchestrations to make them consistently engaging.

Attack of the Earthlings is short-lived, and the levels don't showcase its strengths as well as they could. Much of that comes from each area's heavily scripted nature; the game has a story to tell, and you can't do much to muddle with the plan. Because of that, the game doesn't feel like an organic stealth adventure. Enemies move in rote patterns, with little in the way of surprises to shake up play. This is especially true when it comes to cross-level play: Where XCOM and its contemporaries bill themselves on persistent consequences for mission choices, Attack of the Earthlings takes a different, absurd tack, dropping the severe consequences of mission failure and the emergent narrative for what is essentially a sketch comedy in space. Despite that, the game is often funny enough to warrant a rather broad recommendation.

As long as you aren't thirsty for a deep tactical foray into the great unknown, Attack of the Earthlings is a competent (and occasionally great) jab at the corporate world, and the ludicrous lengths that people will go to in order to make a buck. 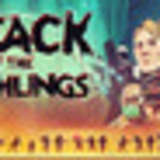 Daniel Starkey survived the human invasion, expelling the intruders in about 10 hours. He was provided with code by the publisher for the purposes of this review.