The Arland trilogy of Japanese anime-flavored role-playing games ends with a whimper in Atelier Meruru: The Apprentice of Arland. This last addition to the family bogs down the formula with a number of extras that make the game more annoying than entertaining. While the addictive alchemy formulas that sit at the heart of the gameplay have been held over for a repeat performance, everything else has been hit hard by an obnoxious spoiled brat of a title character, a repetitive plot loaded with never-ending tedious dialogue, and so many creepy moments with the short-skirted kiddie characters that you feel like you're committing a crime just looking at the TV screen.

Like the first two games in the franchise, Atelier Meruru is set in the fantasy kingdom of Arland. The scene shifts to the rustic backwater of Arls, and the new heroine is Princess Meruru, who chooses to become an alchemist simply because she's bored and wants to irritate her old man. Meruru is an insipid, self-absorbed kid, about as far from a sympathetic title character as you could roam, complete with a blackboard fingernails screech of a voice and a giggle that could cut glass.

The story is a bit more pleasurable, dealing as it does with Meruru's attempts to improve the kingdom and prove herself as an alchemist. But she is so annoying in every way that you can't help but cheer for her to be beaten into the ground by every monster she encounters. Needless to say, that is a problem given that you're supposed to be guiding Meruru to success. Other characters are easier to endure, although their meandering dialogue rambles on endlessly through conversations that make Saturday-morning cartoons seem like George Bernard Shaw.

The setting is overloaded with anime-style cutesiness. There are more pastel colors and glowing stars here than in the average 8-year-old girl's dream bedroom. The entire game sparkles like a Twilight vampire. Even hard-fought victory in combat is concluded with Meruru and pals jumping up and down like they just won a spelling bee. Music is equally light and poppy, although tinges of adult rock make it more acceptable for the crowd that doesn't need a fake ID to buy a six-pack. This kid-friendly atmosphere sits uncomfortably alongside sexualized fetish outfits on too-young female characters. Costumes are taken to extremes with super-short skirts and corsets that it makes playing the game somewhat cringe-worthy.

As in the previous games in the series, Atelier Meruru is mostly about alchemy. Meruru is a budding alchemist at the start of the game, with a small list of recipes that allow her to whip up everything from healing salves to bombs. Exploration on the world map is required to find all of the goodies needed to make these items, so you spend a fair bit of the game wandering far and wide stuffing your inventory with grass, rocks, salt, flour, water, logs, mushrooms, and more esoteric items that sort of defy description. As the game proceeds, you open up more areas on the map, access more recipes, and discover rarer items that can in turn craft more interesting and more powerful gear and weapons. It is overly formulaic, and somewhat linear in that there isn't as much room for experimentation as you would think given the significant number of ingredients available for your alchemical synthesizing.

But there is still something addictive about exploring for new items and then experimenting with the results of your recipes. It also adds a pretty involved tactical layer to the game, because you need to take advantage of the recipes to have a chance of surviving much of the combat. You can't cruise along on autopilot, relying on a handful of tried-and-true concoctions. So despite the game's atmosphere, you can find yourself hooked, at least for a while.

Unfortunately, the initially addictive combat eventually falls into a rut. Battles all take place in turn-based showdowns where you generally either launch right into melee attacks with Meruru and her friends or select some special item whipped up in the alchemist's pots. Skrmishes fly past, at least, but never involve much in the way of tension. You usually know from the first moments of an engagement if you're going to survive or not, since your chance of victory is set forth at the alchemist's pot in the lab long before you head out into the world. The only distinctive aspect of the combat system is the bizarre enemies, which take the cute premise of the game to a hilarious extreme with foes like carrot-wielding bunny rabbits.

Your actions seem somewhat removed from the campaign, however. The story centers on Meruru building a better Arls by making it bigger, which is accomplished mainly by clearing out areas on the world map and erecting structures that in turn boost the population. Unfortunately, this doesn't always directly tie in to your adventuring and scrounging for alchemical ingredients. Campaign goals are set on timers where success or failure governs what ending you get at the close of play. While you may feel driven to scrounge regions to find rarer items, slay foes, and boost your level, these things take time away from accomplishing timed goals. It can seem like exploration is something of a waste, as you find yourself rushing through areas after achieving goals. The time limits add pressure that takes away from being able to enjoy the game at a relaxed pace and simply have fun exploring and cooking.

You may well like the quirky, crafting gameplay of Atelier Meruru: The Apprentice of Arland. You may well get into harvesting ingredients and building this little backwater into a real kingdom. But it is impossible to enjoy the game as a complete experience because you see everything through the eyes of one of the most vapid gaming protagonists ever created, and do all of your adventuring in a world so sickeningly sweet that you should get screened for adult-onset diabetes the moment you put down the gamepad. This, plus the repetitive nature of the campaign and the timed goals, betray the good elements provided through the crafting and adventuring. 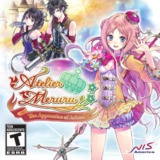 Atelier Meruru: The Apprentice of Arland
Follow
$29.99 on Target
Buy