With its simple, turn-based battles, storybook universe, and saccharine characters, Atelier Iris: Eternal Mana feels like a throwback to the glory days of the SNES role-playing games.

Nippon Ichi Software has built a name for itself by effectively cornering the market on lighthearted but complex strategy role-playing games like Disgaea: Hour of Darkness and Phantom Brave. Primarily a development company, Nippon Ichi has been publishing its own titles stateside under the NIS America banner since 2004. Atelier Iris: Eternal Mana is the latest from NIS America, and while it wasn't actually developed in-house, it has a distinct style and sense of humor that Nippon Ichi fans will immediately recognize. However, in a departure of sorts, this game features a traditional turn-based battle system that more closely resembles Final Fantasy than Disgaea. In fact, with its simple, turn-based battles, storybook universe, and saccharine characters, Atelier Iris: Eternal Mana feels like a throwback to the glory days of the SNES role-playing games--which is the best thing that can be said for a game like this.

While Atelier Iris is new to the US, the series has actually been around since 1997 in Japan. The series has always revolved around the practice of synthesizing powerful items through the process of alchemy, and Eternal Mana is no different in this regard. The main character of the game is Klein, a young orphan and budding alchemist. In the land of Regallzine, where the story takes place, alchemists are rare individuals who possess the power to create magical items. In order to do so, they rely on the help of elemental creatures called mana, who can fuse items and manipulate elements. Most alchemists can only use one mana, but Klein is skilled enough to use a half-dozen or more at a time. This skill, coupled with the ability to extract elements from just about everything in the environment, makes Klein an easy candidate for the position of savior of the world.

As with pretty much any role-playing game, the world is on the brink of destruction because a madman is hell-bent on reviving an ancient and deadly power that he thinks will save humanity somehow. Because of his unique powers, Klein is in the position to stop the madman, who in this case is a megalomaniacal alchemist named Mull. As Klein, you'll travel around the world seeking out mana and completing a variety of side quests, all while using your alchemy skills to outfit yourself and your friends with the latest magical equipment and items. There are hundreds of items to collect, and they can, in turn, be used to create other, more powerful items. You can take the items you purchase or find to synthesis shops where you can create new items based on a variety of recipes. The items you create can then be used in other recipes to create yet more specialty items. In addition to using the items yourself, you can extract elements from them or give the items as gifts to the mana you've collected.

Mana are spiritual creatures who help Klein use elements to create magical items. Mana can also be equipped to a character, resulting in specific stat bonuses as the mana and the character level up. Additionally, some mana give you special powers that you'll have to use to get through some of the dungeons in the game. For example, the mana of stone can be summoned to serve as a stepladder to help you reach places that would otherwise be inaccessible. As you collect mana, these special powers are represented by an icon on a small dial in the upper-left corner of the screen. You can cycle through the abilities with the R1 and L1 buttons, and activate them with the square button. Most of the mana abilities are strictly for the sake of convenience, and in fact, during one of the many in-game tutorials that shows up each time you learn a new ability, a mana tells you, "It's basically fan service at this point." As you call upon the mana to create items or use abilities, their energy level decreases, as does their disposition toward you. To replenish these attributes, you can give your mana gifts in the form of items. The energy and attitude of a mana is important when creating items, and mana will sometimes refuse to work for you if you don't treat them properly.

Aside from the item customization and mana system, Atelier Iris is a standard console-style role-playing game, complete with random encounters, dungeons, and character leveling. The storyline develops as you complete various quests that eventually manage to find a common thread. Usually, completing one task will open a new area of the world for you to explore. The world is made up of only a few towns and several dungeon areas connected by paths or fairy rings that instantly transport you to your destination. In all areas other than towns, you'll often be drawn into random battles.

The battle system in the game is just like the 2D Final Fantasy games, with the enemy on the left side of the screen and your party of up to three characters on the right. Only three characters can participate in a battle at once, but during a character's turn you can choose to swap him or her out for any one of your other characters. You can even swap a healthy character out for one who has been rendered unconscious, which is a good way to avoid damage. Likewise, you can substitute a healthy character for one who has fallen in battle. This combat system makes it easy to get to know the strengths and weaknesses of all the characters in your party, since you can effectively customize your party to fit any situation. Though, there are only half a dozen playable characters in the entire game, so it doesn't take long to test out all the different combinations.

Regardless of which characters you use in battle, your entire party will gain experience. However, any characters that didn't actually complete an action in battle only get half as many experience points as the others. This ensures that no characters are left behind, but it doesn't provide much incentive to use all the characters in your party since they continue to gain levels whether you use them or not. As your characters gain levels, they get skill points that you can distribute as you see fit to level up special attacks, support abilities, and defensive skills.

In addition to the battles, Atelier Iris has some light puzzles and platforming challenges in the vein of LandStalker, only not nearly as difficult. These diversions are brief and too easy to be fun, though, and if anything, they can get a bit tedious. Speaking of tedious diversions, Atelier Iris often suffers from annoying quest design that relies too heavily on mindless fetch tasks that tend to dilute the plot. For example, you'll be told to collect a few ingredients to create a particularly important item, only to find out that the item can't be created until some other completely arbitrary condition is fulfilled. Of course, to fulfill that condition you'll have to backtrack across the world, complete a minor task or fight a boss, and trek all the way back to where you were in the first place. Most role-playing games have plenty of these types of quests, but here it just feels like the developers were looking for an easy way to add a few more hours to the gameplay clock.

The main storyline of Atelier Iris only lasts about 25 hours, but that's without exploring the optional side quests. You can also spend hours finding and creating new items, and as you do, you'll unlock bonuses like character galleries and music tracks.

The graphics of Atelier Iris look generally dated by today's standards, but they fit perfectly fine for what the game requires. The androgynous, anime-style characters are represented by bright and colorful 2D sprites during battle and in most of the story scenes. There are also plenty of large character portraits that accompany the dialogue sequences. The world map looks pretty bland and uninteresting, thanks to a fog effect that covers the top portion of the screen, but again, the graphics are functional in that they don't detract from the gameplay in any way. In towns and dungeons, the environments are colorfully detailed and full of destructible objects that usually blend well with the background.

The enemies you'll face in Atelier Iris range from sickeningly cute to totally bizarre. You'll spend a lot of time fighting monsters that look exactly the same, only they come in different colors. There are well over half a dozen different types of slime blobs, known here as punies. Some wear hats, some are babies, and others are invisible, but they are all just blobs of jelly. It begins to feel like a cop out after awhile, like the developer simply picked the most generic role-playing monster type, created 10 different colors of it, and put it everywhere in the game. And this isn't just the case with punies either, as you'll see the same thing with golems, birds, cat-girls, and just about everything else. As you progress through the game, it doesn't really feel like you are defeating bigger and badder foes; it feels more like you're just defeating red monsters instead of blue ones.

The sound in Atelier Iris is strong in some areas, but completely buggy in others. The actual sound effects are functional, but the characters' voices often cut out or start skipping in mid-sentence. It's forgivable the first couple of times it happens, but it soon starts to feel like you're playing an unfinished game. It's especially disappointing because the English voice-overs are, for the most part, pretty well done. For purists, there's an option to listen to the original Japanese voice-overs.

For all its faults, Atelier Iris is still a charming and endearing game that will no doubt appeal to Nippon Ichi fans. Despite the buggy vocals, the dialogue is laugh-out-loud funny at times, and it's difficult not to like the silly characters. The game definitely doesn't take itself too seriously, which is a welcome departure from the oppressive tone of most modern role-playing games. Atelier Iris: Eternal Mana is a quintessential Japanese role-playing game and an amusing bit of nostalgia for those who cut their teeth on now-classic 16-bit role-playing games like Secret of Mana. If you don't mind 2D graphics and can forgive the frequent sound glitches, you'll find a solid and often hilarious role-playing game in Atelier Iris. 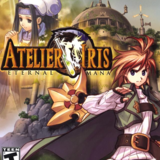