This is an excellent example of retro gaming done right. By taking the old vector graphics-based classic Asteroids and revamping it with fully polygonal 3D graphics, Activision has pulled off a faithful, yet fresh, translation of the original shooter.

Any of you who remember playing this classic game will find much to enjoy here. Wisely enough, developer Syrox didn't stray too far from the original concept. In Asteroids, you still rotate your ship with the goal of obliterating every last piece of space debris from the screen while trying to avoid an ugly death-by-collision. In this modern update, you still have thrusters and the ability to warp out of harm's way. Added to the basic concept is the introduction of power-ups. A large variety of weapons is available for the taking, including homing missiles, plasma swords, plasma drills, shield energy, etc. These power-ups randomly float by, giving you the opportunity to fly after them or simply wait until they drift by you. Other subtle changes include the presence of onscreen environmental effects, such as black holes, which will slowly draw you in unless you keep tapping at the thruster button. Elements like these add needed strategy to what would be an otherwise basic 32-bit update.

Simply put, this game is fun. The graphics look great, with all manner of particle effects, special effects, and sound effects conspiring to create a vintage, yet thoroughly modern game. All the sounds from the original arcade game are used here, but they've been augmented considerably. For example, whenever you get crushed by an asteroid, you really feel as if you've just been totaled. On a good sound system, this game will blow your walls off. Unlike the old days, where everything was just a bright outline, now you have huge polygonal asteroids floating your way, and the same goes for the UFOs who randomly appear to attack you, power-ups, and wrecked space stations too. Your little ship even looks cool with thrusters burning whenever you rotate or propel your ship. On a side note, the game also is littered with impressive CG cutscenes. Not bad for a fairly basic game. Depending on your scores (yes, there're high scores), you'll also access various secrets hidden in the game. Original Asteroids anyone?

Basically, if you liked the old Asteroids, you'll definitely like the new one. Sure, a lot of old games don't necessarily translate into a swell time these days, but this is an exception. With the variety of challenges found in the game, there's a surprising amount of replay value. Value, it should be noted, that is improved when a friend joins in. While it might make a better rental than a straight-up purchase, either way you won't go wrong. For old-school gamers and young ones alike, this game is worthy enough. 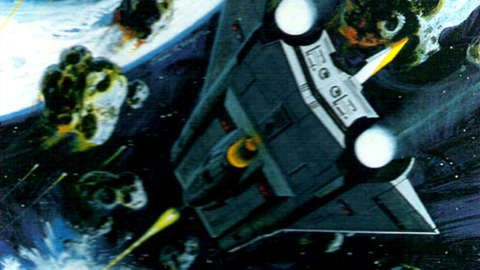