What The Infamy promised, The Betrayal fails to deliver due to a glacial pace, repetitive missions, and an inconsistent new power.

There's that classic problem with trilogies: after the intrigue and excitement of the first instalment, the follow-up must wrestle with moving the plot forward in a meaningful way, while avoiding those grand revelations so often saved up for the third and final entry. It's unfortunate that The Tyranny of King Washington - The Betrayal (Ep. 2) is the very epitome of a plodding second act. It makes no effort to expand on the mysteries raised by its alternate-universe setting, nor does it offer up much in the way of action from its dull assortment of characters. And worst of all, there's little to be seen of the enigmatic and evil George Washington, the very villain who brought The Infamy (Ep. 1) to life.

Instead, you're introduced to a few familiar faces from the Assassin's Creed universe, most notably Benjamin Franklin. He's not his old self initially, but he soon reverts to the same slightly odd character who never really sparked much interest in Assassin's Creed III. Indeed, many of the cast members of The Betrayal fail to capitalise on the alternate-reality setting and instead spend most of their time standing around conjuring up plans and sending Connor out on errand missions around misty Boston. There's a hope that it's all for the greater good of Episode Three, but when you're faced with waves of repetitive missions and seriously dull dialogue, it's hard to see the bigger picture.

The missions take the form of fetch quests, mixed up with the odd assassination. There's nothing here you won't have seen before, and because the mission types are repeated so often within the episode, they get very old, very fast. Like in the first episode, Connor is given a new power to spice things up, this time in the form of short-range flight. Rather than having to leap and climb across the rooftops of Boston, he can zip between them in short bursts, or even chain his flights together for some long-distance travel. It's quite a liberating feeling at first and brings to mind Batman's fluid glides around Arkham City, but the power's shortcomings soon become apparent.

Accuracy is not one of the power's strong points. While you can flap around almost endlessly if you don't mind where you're going, trying to direct Connor along the rooftops is massively frustrating. The icons that let you know where you can fly to are often clumped together too closely, making them difficult to pick out when you're in the middle of fast-paced motion. There's an endless battle between you and the camera as you try to highlight the place you want to go to, only to miss it and end up somewhere else, or on the ground. More useful is the ability to home in on targets from afar and land a sneaky kill, though Boston wasn't designed for such actions, so your attack is often blocked by an errant chimney.

The power itself is based on the abilities of a eagle. Like in The Infamy, Connor drinks a hallucinogenic tea and embarks on a strange, otherworldly drug-trip-cum-tutorial that's as clumsy as it is weird. The Eagle power is the only real nod to Connor's Native American heritage that featured so strongly in the first episode, which is something of a disappointment--particularly if you're interested in learning more about Connor--but not unexpected given the city setting. What is unexpected is Boston itself, which remains seemingly unaffected by Washington's dictatorship, and so looks and feels just like it did in ACIII: it's that lack of detail that makes Episode Two feel far less convincing than its predecessor.

That's a shame, because if The Infamy did anything, it sparked curiosity in the evil George Washington storyline. It's not until the very end of The Betrayal that things begin to get interesting again, and having to trudge through the rest of the episode to reach that point is a lot to ask, even if you're already heavily invested in the story. Lots of side missions and collectible memory artefacts help to ease the disappointment, but they're not enough to make The Tyranny of King Washington - The Betrayal the exciting follow-up the first entry hinted at. Here's hoping Episode Three picks up the pace. 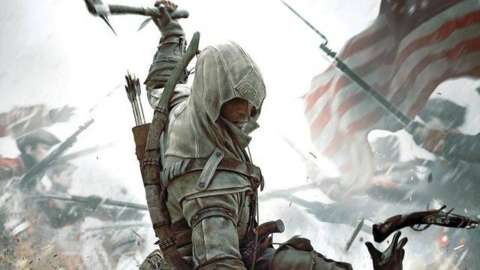 Assassin's Creed III is an upcoming free-roaming action-adventure game for the PS3, PC, Xbox 360, and WiiU that takes place both in a near-future setting and 1775 colonial America.