The middle chapter of the Chronicles trilogy improves the formula, but doesn’t perfect it.

Say what you will about the Assassin’s Creed Chronicles games so far: They know how to make one heck of a first impression. With India, the ominous mists that frequently shrouded the floating junks and palaces of the previous game--Assassin's Creed Chronicles: China--have lifted, and a dazzling, painterly Shangri-La awaits, awash in henna patterns and deep hues.

Something of a pseudo-sequel to Assassin’s Creed Chronicles: China, ACC: India picks up 300 years later. The Templars and Assassins are searching for a legendary artifact: the powerful Koh-I-Noor diamond. It's encouraging at first to visit a setting as underutilized as India, but it quickly gives way to disappointment once you realize its unique qualities are merely used for window dressing. When you’re running, jumping, climbing, and killing in ACC: India, its typically more for its own sake than any investment in the story. To expect more is folly.

Chronicles aims to be a hybrid between Assassin's Creed and old-school Prince of Persia. You're on a 2D axis, but with three or four planes you can move in and out of at specific points. Running, jumping, and swordplay have a fluidity and heft that must be accounted for before every major move. The kinetics are very much Assassin's Creed; vaulting over gaps and obstacles, using the environment to stay invisible, and, hopefully, getting to stick your sword or wristshank in the spinal cord of the hapless fools in your way.The typical AC mechanic of simply being able to hold one button and letting the acrobatics happen automatically is where the Chronicles series diverge from the main games. Jumping, sliding, and climbing are manual activities here, and have to be carefully plotted, more akin to Mirror's Edge than anything the Frye twins did in the last year.

You play as a clever, cunning rogue named Arbaaz, who has a dry wit and a notable disregard for authority. Your first mission is to infiltrate a heavily guarded palace to steal quality time with your lover, the princess. The first half hour of the game is magical, suggesting the kind of adventure we haven’t seen from Ubisoft since the last Prince of Persia. The magic of that first half hour only serves to highlight missed opportunities in the remainder of the game, even in the face of its many advancements over its underachieving predecessor.

The gameplay in India is much improved this time compared to Assassin's Creed Chronicles: China. For starters, there are more assassination missions to be done, and you're scored for each mission depending on your level of stealth. Most of your time is still spent crawling along the sides of buildings, obsessively watching for vision cone patterns, and hiding in alcoves, but this game no longer feels so vehement about players taking the stealthy, no-kill route. In fact, there are quite a few sections that require you to clear out a dozen enemies, often with a swift time constraint. Figuring out just the right dance to clear the room is a delight; with enemies diabolically placed and more lethal than ever, every kill feels like its own victory.

Arbaaz's attacks can sometimes feel a little sluggish, with the response time for him to even unsheath his sword not exactly quick when there's enemies all around. If you can accomplish missions without having to resort to hand-to-hand combat, even better, but it's not easy when the appropriate icon occasionally fails to appear when you're close enough to an enemy for a stealth takedown. Trial-and-error is definitely encouraged here, and thankfully, the game reloads in a flash, allowing for very little break in the action should you need to restart. The tools of the trade remain mostly the same--smoke bombs, explosive noisemakers, a simple grappling hook, and a whistle are joined by a chakram which can be thrown to cut ropes or stun enemies. New Animus Helix powers allow for instant, on-the-fly invisibility or one-hit kills. There's even a wonderful little puzzle involving a primitive sniper rifle that’s a bit tricky but ultimately satisfying. Still, ACC: India represents a missed opportunity to hearken back to Assassin’s Creed’s roots, which gave you a series of infiltration missions where you could ignore or avoid most other NPCs, and instead just focus on that big fat kill at the end. The challenge rooms that open up as you progress in the campaign scratch that itch to an extent, but not enough to satisfy it for good.

On the flipside, there are more sequences where straight parkour is required to get out of a hectic situation, which was arguably one of the more fun, unique parts of ACC: China. This time, you’re more likely to get into these situations because you’re trailing villains through temples or a full-on chaotic war has broken out and you need to flee to safety. The problem here is that, for all the speed these sequences require, and as gratifying sprinting across obstacles while cutting down enemies can be,courses tend to grind to a halt for uninspired timed-jump puzzles, which ruin the breakneck pace of the rest of the courses.

The real frustration of Assassin’s Creed Chronicles: India is seeing a game that fails to fix the problems of its predecessor, or take advantage of its setting's great thematic potential. We have a game that takes place in a particularly bloody era of Indian (and, in one segment, Afghan) history, where the Templar villains are two high-ranking British officials, and the protagonist has every given reason to defy the Assassin Brotherhood. Yet all of the most interesting efforts to fight the good fight are reduced to finding collectibles.

For the mainline Assassin's Creed games, the history and characters are the bones holding the gameplay upright. For the Chronicles series, the curiosities presented by the setting act as a thin veneer that only momentarily distracts from the flaws beneath. Like Arbaaz himself, these great moments have a bad habit of vanishing into thin air when you least want them to, bit there is still a lot of fun to be had in this Indian adventure. 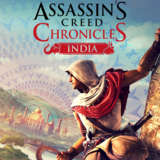 Justin Clark was able to slip in and out of AC Chronicles: India in about five and a half hours, compared to three and a half or so for China. Far too much of that time was spent remembering the Monty Python "How To Not Be Seen" skit at the worst possible moment, snickering, and Arbaaz catching a face full of lead as a result.