Asphalt: Urban GT 2 is a fun and visually impressive arcade-style racer, even if it is just an evolutionary upgrade of the original game.

One of the more pleasant surprises during the Nintendo DS launch was Asphalt: Urban GT, a racing game from Ubisoft and Gameloft. Everybody expected the worst, since the game had the misfortune of being released for Nokia's much-maligned N-Gage platform at around the same time. However, those who gave it a chance and played it discovered a fun arcade-style racer that actually did a good job of flexing the system's 3D capabilities. Word of mouth must have led to decent sales, because the sequel has just been published. Asphalt: Urban GT 2 picks up where the first game left off. The underlying gameplay and graphics haven't changed much, but there are many more cars, tracks, and events to pick from this time around. Motorcycles have also been added to the mix, and some of the kinks have been ironed out, specifically ones concerning the physics and handling that made the original game seem a bit rough around the edges. Taken together, these modest upgrades make for a sequel that's meatier and more polished than its predecessor, even if the nuts and bolts are really just more of the same.

A good way to describe Asphalt: Urban GT 2 in comparison with its contemporaries would be to call it a mash-up of Ridge Racer, Burnout, and Need for Speed Underground. The majority of race events involve completing three laps around a city course against a field of seven other vehicles. Cars tend to drift all over the place, to the point that you'll often find yourself going through curves at 45- or 90-degree angles. Obviously, this isn't a sim. Most of the time, you just have to mash the gas button and do your best to steer through the turns. When you need an extra burst of speed, you can kick in the nitrous. The game gives you extra nitrous, along with some serious bonus cash, for nudging opponents and getting into close scrapes with traffic. Collisions with oncoming cars will stop you cold and suck some money out of your bonus purse, while rear-ending the cars traveling ahead of you will send them sailing off the course and increase your bonus total without so much as dampening your forward speed. When you've caused too much mayhem, the cops will take notice of you and give chase. If a cop car bumps you into a wall, you'll stop for a few seconds and end up paying a fine. Between races, you'll find yourself constantly spending money to add another of the more than 50 different real-world cars to your garage, or to outfit any of the cars you already own with a variety of performance and body upgrades.

As arcade racers go, Asphalt: Urban GT 2 is exciting and hectic, although it may be too easygoing for some. Ratcheting the nitrous up to three bars, outrunning the cops, and slamming opponents into walls are all the sorts of things that add up to great fun, but the thrill fades somewhat once you realize that the CPU does a lousy job of keeping pace or taking revenge. If you pick your most tricked-out car, you'll blast past the pack and hold first place for pretty much the entire race. As crazy as it sounds, the best way to keep the thrill level up is to pick a low-end vehicle. You'll feel as though you're part of the pack that way, and you'll get to trash your opponents more often. The addition of motorbikes to the vehicle roster is cool and new for the sequel, although their inclusion hasn't made much of a practical impact. They tend to slide more, and they can use the hoods of oncoming cars as makeshift jump ramps; otherwise, they handle the same as cars do. A more significant improvement is the way they've tightened up the handling and physics, such that the cars feel heavier and the artificial intelligence players are no longer able to pass through walls and traffic like they could in the first game. Now, when you shove opponents into oncoming traffic, they're going to be out of commission for a few seconds.

The variety of events helps to keep things fresh. In the arcade mode, you can pick and choose from single races, time attacks, cop chases, bandit chases, and elimination events. The cop and bandit chase events are particularly interesting because they have you running from the cops or chasing down perps for an entire race. In the evolution mode, which is basically a career mode, you'll tackle roughly 60 different championships pieced together from normal race, duel race, elimination race, and radar events. The elimination and radar events can truly pose a challenge, because one ill-timed crash can leave you at the back of the pack right before a cutoff marker or slow you down so that you can't reach the speed required to pass the radar test.

It also helps that the game has the sweet 3D visuals and fast action that people crave from an arcade racer. Cars are large and nicely detailed. The 3D engine has no problem pushing the eight participating cars, a bunch of traffic cars, the multilane streets, and all of the various buildings lining each course. Buildings and trees look sharp and colorful, and every track has a healthy assortment of signs, garbage cans, and other sidewalk decorations that you can smash through. The frame rate does hiccup once in a while, but overall the action is smooth. Anyone who played the first game will be happy to learn that road draw-in and building pop-up are less obvious in the sequel. Most of the time, roads and buildings in the distance slowly fade into view instead of just popping into existence. About the only annoyance with the visuals is that objects and curves in the distance sometimes appear distorted, which can cut back on the time you have to plan for a drift or avoid an obstacle up ahead. It's the same sort of distortion that you see in every DS game that has to scale detailed graphics on the system's low-resolution screen. After you've run a couple of laps on each course, you probably won't be bothered by it. The generic sound effects and rockabilly music that accompany the visuals don't make as much of an impression as the 3D graphics do, but they'll get the job done without sending you rushing to mute the volume.

Compared with the first Asphalt: Urban GT, the sequel is an evolutionary update. The graphics are a little cleaner and the handling and physics are more consistent, but the overall look and feel has carried over relatively unchanged. The addition of motorbikes is noteworthy only in the visual sense, as you don't have to change your driving tactics one bit when you're on two wheels--you can rear-end cars and send them sailing off the course just as easily with a bike as you can with a car. The primary distinguishing factor between Asphalt 2 and its predecessor is that the sequel serves up a whole bunch more content. There are 14 different tracks to race on and more than 50 vehicles to collect and upgrade in this new game, as opposed to the nine tracks and roughly 30 vehicles found in the original. The sequel also boasts twice as many championships in its career-style evolution mode, and its arcade mode features a new bandit chase event that lets you see how long you can outrun the cops in a "three strikes and you're out" format. Multiplayer in the sequel consists of the same one-off race, three-race championship, and cop chase events that the original game had, although now there are obviously more vehicles and tracks to pick from.

Anyone who liked the first Asphalt: Urban GT will probably enjoy the sequel, too. It's more of the same, but that's not a terrible thing in this case. If you never played the first game and you happen to enjoy arcade-style racers, then you should definitely check out Asphalt: Urban GT 2. The CPU is a pushover at times, but the hectic thrills and enjoyable presentation more than make up for that. 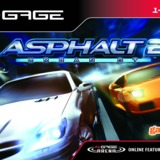