Due to its strong script and pitch-perfect performances, Interior Night's debut stands among the very best games of its kind.

A dusty motel in the middle of nowhere doesn't sound like a typical video game setting, but debut studio Interior Night, composed of industry veterans, uses this peculiar place to create a game unlike anything else you'll play this year. As Dusk Falls deftly explores themes of inherited hardship through the lens of two families who cross paths on one pivotal night. By way of incredible voice acting, a compelling and expertly written script, and a bounty of pause-worthy choices along the game's elaborate branching paths, it establishes itself as an instant classic in the narrative adventure genre.

Playing As Dusk Falls reminded me of something I think about a lot: how each of us is just the end result of every moment we've experienced before today. We often like to make up reasons for why we do something--drive recklessly, win the spelling bee, get a divorce, give an unhoused person some money--but ultimately, our behavior is more determined by our pasts than what feels like our split-second choices in the moment. Rationalization comes after the act, whatever it may be, as a way to make sense of ourselves. Enough bad experiences, especially at an early age, can create fundamentally flawed people who routinely make poor choices, while a rosier upbringing can birth inspiring role models. To some extent, we're fated for success or failure before we even know we're on the playing field. As Dusk Falls swims in these complicated waters.

The game opens in 1998, when two families collide--literally--on a desert road in Arizona. The Walkers are moving cross-country to reset their lives after the patriarch of the family, Vince, was let go from his job as an airplane mechanic due to a controversy that might end in litigation. The Holts, meanwhile, are infamous locals that have been making noise in the otherwise quiet town of Two Rock for decades. Side-swiped by the Holts, who flee the scene, the Walkers seek salvation at the Desert Dream Motel, the closest sign of life on the desolate road. Before long, the Holts end up there themselves following a robbery that goes south, and in their desperation, the Holts take the Walkers and others as hostages.

Right away, Interior Night showcases a keen understanding of pacing and exposition. You'll quickly understand each character's place in the story and what kind of energy they bring to it. But that's not to say they are predictable and one-sided. As Dusk Falls focuses on these two families and several other characters who get caught up in the mess, and every single one of them is made interesting and dynamic.

Because this is a choose-your-own-adventure-style game in the vein of those from Telltale, Supermassive, or Quantic Dream, you'll steward each of these fascinating characters through the use of frequent dialogue options and quicktime events. The game's motion-comic style means you aren't exploring the world in first- or third-person, which helps keep the story moving at a pace that mimics a serial drama perfectly, with smartly timed flashbacks that flesh out characters and cast so-called heroes or villains in new lights. Paired with an audio experience that fills in each scene the way you'd expect to hear in an audio drama podcast, the characters manage to come to life despite their still-frame delivery while a playlist of licensed music further settles the story in a place that feels real and lived in.

This delivery also seems to save As Dusk Falls from a major pitfall of the genre: Without needing to animate each character based on your dialogue choices, conversations flow much better. Sometimes in games like this one, you can almost hear the cuts between voice lines and the presentation suffers as the game jumps around reacting to this dialogue branch or that one, but that doesn't happen in this game. Every conversation expertly moves the plot forward and does it without the video gamey stutter-steps or pacing problems that you may be used to in such a game.

As if delivering a best-in-class story wasn't enough, As Dusk Falls also builds on the genre's burgeoning social elements in a creative manner. It can be played in solo mode or in a party as big as eight players, each of them casting votes to move the story in their preferred direction. This party can be all local, using up to four controllers and a companion app, it can be all online between you and seven others, or it can be some combination of local and online. There's also a broadcast mode, so streamers can have their say in decisions.

In my experience, it worked as intended, and the added wrinkle of mixing in-person players with online players seems like the best use-case of the game mode. This kind of game is made better when you can argue over choices with your friends and family, and As Dusk Falls has a lot of choices worth arguing over.

While so much of Dusk Falls feels authentic, its depiction of police tactics come off as confusing at times. In dealing with the hostage situation, the local Two Rock police and other forces resort to strategies that sometimes don't seem sensible. Rather than a commentary on something like the ineptitude of cops in a crisis, it felt more like an odd or unresearched writing choice. It was the only moment in the game where I had to suspend my disbelief, though I hesitate to be specific for fear of spoilers.

The game tells a complete and excellent story, but it also leaves room for a sequel. I found its way of teasing that possibility to actually hamper an otherwise poignant finale, causing emotional whiplash when I would've been content to sit in the feelings the game nearly chose to leave me with.

Ultimately, the nuances of every character and dialogue option are the best parts of As Dusk Falls. When you're stuck on a decision screen, it feels like Interior Night is always one step ahead, knowing that you can likely foresee how any choice you make could save the day or go south in a hurry. As Dusk Falls can feel like it's in the same misery business as series like The Leftovers or Six Feet Under, meaning much of the time your best-laid plans will go terribly awry partly due to its writers' penchant for melancholy. But by the end of the sixth and final episode, a complete story will come into view, and it's one that doesn't relish the idea of ruining every character's life--though I don't doubt such an ending may exist somewhere on the massive story tree visualized in-game.

Rather, it ends up telling a story that brilliantly grapples with a lot of under-explored, or even unexplored, themes in video games. Like a lot of my favorite games, it left me with a lot to think about, such as the roles we choose or reject, the hardships we inescapably inherit from family, and how trauma casts a dauntingly long shadow, but how forgiveness, should we choose to show it, may just let the light in. 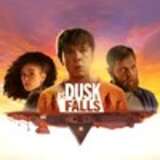 Mark spent eight hours with the fateful families of As Dusk Falls, taking six hours to beat the game in solo mode before replaying select scenes in multiplayer. A review code was provided by the publisher.