The 40th Day has the same shallow appeal as a summer blockbuster. It provides brash, satisfying action when you're in the mood for something loud and fun.

Army of Two: The 40th Day is a third-person shooter in which your objective is simple: get out of Dodge. Or more accurately, Shanghai, a city that is being torn apart by missiles for no discernable reason. Why is this happening? Who is behind it? Who cares! You can paint skulls on your shotgun and then shove it through your enemy's brain! The 40th Day is light on plot and heavy on action, a balance that suits the game well. It's great fun to team up with a buddy and blast your way through hordes of enemies using your lovingly customized weapons. The gunplay and movement mechanics are solid and satisfying, despite some awkwardness, and the game encourages you to use teamwork with light, yet engaging, tactical elements. There is some strange mucking about with morality during the short campaign, but this is largely overshadowed by the brash, brutal action. And though the lively online multiplayer is hampered by lag, Army of Two: The 40th Day offers enough entertainment to make a strong case for your time and money.

The eponymous army is made up of Salem and Rios, two mercenaries reprising their roles from The 40th Day's predecessor, Army of Two. The game is meant to be played cooperatively, and you can do so locally (via split-screen) or online. You and your teammate travel through the besieged city of Shanghai, shooting your way through a mercenary army and having a grand old time, despite not really knowing what is going on. The core shooting mechanics are sharp and satisfying, and moving around the varied environments is generally easy. However, some awkwardness arises from the fact that sprinting, rolling, sliding into cover, hurdling over cover, and entering a mounted gun position are all mapped to one button. Triggering the wrong action can put you in some tight (read: deadly) spots. You also have to be careful when maneuvering into cover, because though you automatically lean into it, cover isn't sticky. Yet once you start to get the hang of the controls, you'll find that there is a certain fluidity to the way you can move around the battlefield. And as an added bonus, you can take out a regular enemy just by running into him at a dead sprint, which is both fun and funny.

If you choose to roll solo, you'll be left with an AI teammate who generally does a good job of staying out of trouble. That is, unless you want him to get into trouble, in which case you can use the easily issued tactical commands to influence his behavior. Solo or co-op, you should keep an eye on the aggro meter, a slider that indicates which of you the enemy is concentrating its fire on. If one teammate draws all the aggro, the other can slip about virtually unnoticed, picking off distracted foes or moving into a better position. Playing with this mechanic can be fun, and it is strategically relevant enough that a timely aggro grab can save your buddy's skin. There are also a few other tactical tricks you can pull, like mock surrendering to the enemy, that help add some unique cooperative flavor to the action.

In both friendly and enemy AI, there is a slight tendency toward extremes, whether it is your AI teammate downing four baddies with superhuman speed in order to rescue you, or the enemy AI being so focused on your aggro-happy partner that it ignores the fact that you just put a few bullets in his back from a few yards away. Sometimes it feels like the game is erring on the side of letting the player have his fun, but there are some situations that seem more like AI stupidity. You can up the difficulty if you choose, but no matter how you play it, the campaign won't last much longer than six hours. To The 40th Day's credit, it doesn't feel particularly short, and there are two elements that provide some measure of replayability.

The first is weapon customization, which you will engage in throughout the campaign. As you progress, you can unlock new guns and gear for purchase, as well as find upgrade parts throughout each level. You and your partner can initiate weapon customization anytime you aren't in combat, though the other human player must stand near you and accept the prompt in order to actually bring up the store. You can buy guns (SMGs, shotguns, sniper rifles, and so on), weapon upgrades (silencers, clips, stocks, sights, and so on), and a few other augmentations, like increased grenade capacity. You earn a lot of money throughout the game, and many of the upgrades can be applied to multiple weapons, so customization is encouraged. There's an array of upgrades that range from brutal (shotgun bayonet) to bizarre (bulky barrel-mounted shields) to do-it-yourself hilarity (soda can silencer). It's surprisingly entertaining to change your loadout, experiment with different weapons, and tweak high and low aggro guns. And once you've finished the campaign, you can revisit any chapter with your persistent weapon locker and try even more loadouts on for size.

The second element that adds replayability is the interaction you have with noncombatants. There are civilians in this warscape, and most of the ones you encounter are being taken hostage or threatened. Saving them presents an intriguing tactical challenge. Do you blast away and hope to kill the enemies before they kill the hostages? Or do you sneak up and grab the officer, forcing his unit to surrender? (Army of Two features a tactical GPS mode, which is a handy, if distracting, visual overlay that displays relevant battlefield information and allows you to spot ranking officers.) Some characters you encounter will trigger marquee morality choices. Once you choose between the two options, you'll be treated to a cutscene that shows the impact of your decision hours or even days later. The comic-book-style scenes are unpredictable and often very strange. A choice that seems good (like trying to keep a child alive), may end up with grim results. These choices are essentially minigames: small, tangential encounters that offer a small bonus but are otherwise frivolous. If you're looking to derive some sort of clear or consistent message, you're out of luck. Army of Two: The 40th Day tries its hand at moralizing, but the results range from cliche to overbearing to bizarre. Fortunately, these sections are quickly drowned out by a cacophony of gunfire and explosions.

For further action free of any noncombatants, head online and do battle against other armies of two. The Co-op Deathmatch mode is essentially team deathmatch with teams of two, and it's a neat twist on the cooperative action from the campaign. There's also Control, a capture-and-hold mode, and Warzone, a mode that features a fun variety of changing mission objectives. Online action is tuned to be more fast-paced: you can revive your teammates more quickly, and everyone is limited to choosing from the same gun loadouts. While it's a bummer to have the customization stripped out, you can still add your own flair by designing a logo on the game's official Web site, sending it to the game, and putting it on your mask or shoulder armor (this also works in campaign mode). There's a fourth multiplayer mode that is set to be unlocked after those who preordered the game enjoy a month of exclusive play, but as it is, Army of Two's online multiplayer is an engaging complement to its campaign. Unfortunately, many matches are plagued by lag, so unless you specifically select a match with a low ping, you may end up suffering.

Army of Two: The 40th Day is a very appealing shooter, and it looks great to boot. Diverse, ruined environments, cool enemy equipment designs, and nice animation touches make the action that much more lively. It has its fair share of issues,and you'll spend most of the game not knowing why buildings are falling and men are shooting at you. But there's a lot of fun to be had in both the campaign and the online multiplayer. With entertaining action, great visuals, surprising replay value, and the ability to play rock-paper-scissors while standing over the corpses of your enemies, The 40th Day is a fun way for shooter fans to start off 2010. 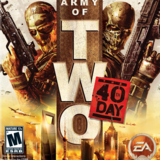