Whether you're toting around explosive grenades, pinpoint mortars, or the dangerous bazooka, Army Men World War: Land, Sea, Air is a well-rounded game that's not just for kids anymore.

3DO's Army Men franchise is a successful one, with more than 20 games, related books, and numerous merchandising tie-ins. However, despite this success, the games themselves are never any good. The visuals are usually poor, the gameplay is contrived, and the fun factor tends to peak upon your tearing open the wrapper. Bearing this in mind, 3DO is back with the latest in its Army Men franchise, Army Men World War: Land, Sea, Air for the PlayStation. It's been barely seven months since the last Army Men game, but more surprising than its timeliness, Army Men World War: Land, Sea, Air is actually a good game. You read correctly: 3DO has created an Army Men game that's fun to play.

Army Men World War: Land, Sea, Air begins its assault rather plainly: The Tan army is up to no good and it's up to you to stop it. To achieve this goal, the game offers three modes: single-player, boot camp, and two-player capture the flag. Using a variety of targets and weapon choices, the boot camp mode acclimates you to the game's controls, which haven't changed since the last Army Men game. The two-player mode lets you and a friend go at it on a few of the game's maps, stealing one another's flags while dodging CPU-controlled bots. While the boot camp and two-player modes are nice, they're throwaways compared to the game's single-player experience. Eschewing the usual run-and-shoot tactics of previous Army Men games, Army Men World War: Land, Sea, Air combines third-person fighting, first-person sniping, Metal Gear Solid-style sneaking, and vehicular combat into a vicarious wartime romp.

At it's core, nothing is different about Army Men World War: Land, Sea, Air's gameplay. You still need to run around killing Tan soldiers while adhering to mission objectives. The game's stock weapons, the M16 machine gun, binoculars, and bayonet remain unchanged as well. Though the bug that got your soldier stuck between rocks has been fixed, the game's controls once again emphasize weapon choice and shooting while limiting your movement in a number of bizarre ways. An onscreen cursor lets you toss a grenade anywhere you can see, but you can't strafe or run backward, and turning around takes forever. Admittedly, while the interface could be better, the game still gives you a decent amount of freedom, allowing you to crawl, crouch, and tiptoe your way through enemy lines. You're going to need this freedom too, as whoever designed the levels for Land, Sea, Air knew what he was doing. Some missions call for quick precision attacks on enemy installations, while others require a modicum of stealth. Unlike prior Army Men games, there are times in Land, Sea, Air when calm use of your bayonet will get the job done quicker and more efficiently than any amount of firepower. Enemy AI has also improved, and while you're not exactly fighting Einstein out there, the Tan soldiers will circle behind your location or feign death to draw you closer.

Topping things off in the gameplay department, Army Men World War: Land, Sea, Air mixes its ground combat offerings with six vehicular and special-weapons levels. Although vehicle control remains on rails throughout, you'll get to partake in a number of activities, ranging from gunner on a bomber plane and handler of an antiaircraft battery to machine gunner on an Apache helicopter and rifleman on a raft. It's disappointing that you don't have more control over driving these actual vehicles, but their presence nevertheless provides a fun diversion. In fact, thanks to the mixture of assault, stealth, and vehicle missions, this is the first Army Men game that actually feels like a real war as opposed to a series of boring skirmishes.

Although it is nice to be able to speak highly of Army Men World War: Land, Sea, Air's gameplay, similar kudos cannot be given to its visuals. While 3DO has fixed the darkness problems from the previous Army Men, copious amounts of graininess, texture warping, polygon dropout, and draw-in plague the game at every turn. On a positive note, the majority of Land, Sea, Air's backgrounds are neither tan nor gray, eliminating another of the previous game's major graphical flaws, that of enemy invisibility. Because the game features mostly jungle and beach motifs, the evil Tan Army can't hide in plain sight anymore. Unfortunately, while Army Men World War: Land, Sea, Air boasts a solid frame rate and plenty of amusing character animations, it's still blockier and grainier than most early PlayStation games.

Hands down, Army Men World War: Land, Sea, Air's greatest trait is its sound quality. Gunshots and explosions are loud and alarming, tearing through plastic soldiers with authority. The utterances the enemy soldiers make when walking, grunting, and leaping are also a delight to the ears. Furthermore, the game's background music is overwhelmingly varied and somehow even more majestic and awe-inspiring than the last Army Men game.

There you have it, a situation so surprising it almost hurts: 3DO's first decent Army Men game. Whether you're toting around explosive grenades, pinpoint mortars, or the dangerous bazooka, Army Men World War: Land, Sea, Air is a well-rounded game that's not just for kids anymore. The inclusion of vehicular combat, increased CPU intelligence, and clever level design makes Army Men World War: Land, Sea, Air a game that can satisfy adult gamers as well. It's just too bad the game's abhorrent visuals, combined with a few lingering gameplay quirks, relegate it to the unenviable position of being the best of 1996. Unfortunately, if you've checked the calendar lately, it's the year 2000. 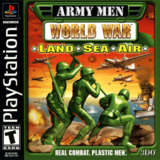 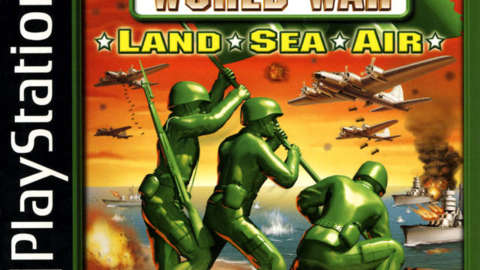 Whether you're toting around explosive grenades, pinpoint mortars, or the dangerous bazooka, Army Men World War: Land, Sea, Air is a well-rounded game that's not just for kids anymore.