Buried under the layers of poor visuals and rough control, there is indeed an engaging, playable game.

The latest entry to the Army Men World War series plays like any sports title given an annual facelift--the players look a little different and there's an extra mode or two, but for the most part, it's the same game. That's not to say that Army Men World War: Final Front isn't without merit. Buried under the layers of poor visuals and rough control, there is indeed an engaging, playable game.

This third chapter in the Army Men World War subseries does not, by any means, attempt to stretch the formula laid down by its lineage. But at this point, you've either come to accept the Green Army vs. Tan Army motif of the franchise or you want nothing to do with it regardless of the scenario. Army Men World War: Land, Sea, Air expanded the series greatly with its inclusion of multiple gameplay modes, including a Solid Snake-style stealth mode and a team of different vehicular combat modes. Final Front refines the ideas set in motion in Land, Sea, Air with different vehicles, such as tanks, motorcycles, and submarines. And unlike the vehicles in Land, Sea, Air, the ones in this game are no longer on rails, so they give you the freedom to roam around the environments while you take down Tan infantry and military hardware. This new freedom comes at a price, as the vehicle control can at times be soft and unresponsive. The solider control still suffers from the same problems as those in previous World War games--namely the inability to strafe and the outrageously slow turning rate. Even with these control problems, the sheer variety of the missions keeps things interesting and keeps you engaged.

One of the facets of the game, which may have some players throwing their controllers at the screen, is the level of difficulty. Each level contains some kind of surprise attack that you wouldn't see coming, and unless you're especially on top of your game, you'll likely take several runs through a level before you complete it. The game includes a boot camp to help you sharpen your skills--and most players will need it.

The level of difficulty is compounded by the game's pathetic visuals, as the grainy graphics can make it difficult to see exactly what you're shooting at or what's shooting at you. Bad draw-in, texture warping, polygon dropout--Final Front suffers from virtually every visual flaw that a PlayStation game can suffer from, save for slowdown. The levels alternate from pitch-black to washed-out, and the textures are, more often than not, bland and low in quality.

The game's sound fares better than its graphical presentation, though it doesn't have the same level of grandeur as Land, Sea, Air--the music swells up only from time to time, and randomly at that. Still, the sound effects are top-notch--the crack of the rifle is loud and sharp, the motorcycles engine possesses an appropriately low growl, and the squeaking and crunching of tank treads help to make up for the anti-immersion that the graphics provide.

When held up to the standards of the franchise, Army Men World War: Final Front is definitely in the upper echelons of the group. More amazingly, when judged on the merits of the game on its own, Final Front still proves to be a fun game--if you can get past the steep learning curve and 1996-style graphics. 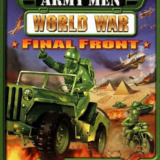 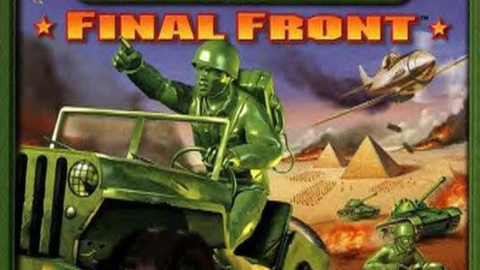 Buried under the layers of poor visuals and rough control, there is indeed an engaging, playable game.